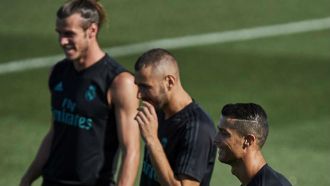 Zinedine Zidane has the luxury of having all three members of BBC at his disposal throughout the international break.

It's the first time that's happened since the Super Cup back in August and the French coach is sure to take advantage.

"BBC is non-negotiable," was a phrase Zidane uttered at his presentation on January 4, 2016.

The three strikers' goals and their talent then saw Real Madrid conquer their eleventh European Cup.

Last season, Bale's injuries allowed Isco to force his way into the starting XI, and with a 4-4-2, Los Blancos repeated their Champions League triumph and also won LaLiga.

All of this, however, seems a distant story for a Madrid that has not been able to count on its three stars altogether this season.

Now, the coach will have BBC under his command as Real prepare for the Madrid derby against Atletico.

With Benzema still not called up by France, Ronaldo asking not to play friendlies for a Portugal side already qualified for the World Cup and Bale preferring to stay in Madrid, Zizou can recover the mechanisms of his star front three, as well as work to repair the emotional damage that a bad run has caused Benzema and Ronaldo.

BENZEMA: The Bernabeu whistles... Only one goal in the League

Benzema is experiencing one of the worst moments in his eight years in Madrid, and the supporters at the Estadio Santiago Bernabeu are an unforgiving bunch.

His numbers, just two goals and two assists in 12 games, do not support Zidane's assertion that he's one of the best.

In the striker's defence, he hasn't fully recovered from his injury against Levante which saw him miss six games.

BALE: Return after eight games out due to injury

He retired early against Borussia Dortmund and, after multiple different versions of his physical state from both Zidane and the Welsh Federation, he has lost eight games between the LaLiga, the Champions League and Copa del Rey.

His umpteenth mishap came just after the best performance of the season, where he scored one of his three goals and gave one of his four assists.

In total, he has played just 719 minutes in nine games but now has two weeks to get his body in shape.

CRISTIANO RONALDO: Pichichi in the UCL, anonymous in LaLiga

Two contrary versions of Cristiano Ronaldo are being seen this season.

On the one hand, we have the lethal Champions League striker with six goals in four games, and top scorer in the tournament.

On the other, the desperation of a footballer who can't finish in the league.

Seven games, one goal; improper numbers for 'the best' striker.

Deschamps defends Griezmann and points the finger at Atletico Madrid

Given the forward's paltry return of just three goals this season, it was always likely that Didier Deschamps would be asked about Antoine Griezmann yet the French national coach instead blamed Atletico Madrid for his player's drop in form.

The now viral image of the former Real Sociedad forward awkwardly departing a Los Colchoneros team photo before it had even been taken, quite neatly summed up the club's season.

Griezmann hasn't looked as focused as he has in recent years and as his performances have suffered, the criticism has arrived.

Having joined up with his national team, many in the Spanish capital are hoping this provides him with a chance to get back among the goals and return a much happier individual ahead of the first ever Madrid derby to be held at the Estadio Wanda Metropolitano.

Deschamps though, refuses to accept that the 26-year-old is in poor form, rather his displays are indicative of the struggling team he finds himself within.

"His form is relative," he explained in his pre-match press conference.

"If it his him, or any other player, form is directly related to the way a team is playing.

"Atletico Madrid has played a number of less than convincing matches."

Given the free-scoring form of Nabil Fekir and Anthony Martial, it was thought that Griezmann's place in the team for the friendly with Wales was under threat.

However, he retains the full support of his coach with the former Juventus midfielder making clear he has no concerns about the Macon born forward.

"Antoine is still Antoine," Deschamps confirmed. "He still has all the same qualities as before, but maybe he is just being a little less decisive.

"I do not have any particular worries about him."

Gattuso: When I saw Pirlo play, I asked myself if I had to change my profession

Andrea Pirlo formed an unforgettable partnership with Gennaro Gattuso and quickly received the adulation from the Milan fans, but now that the latter has announced his retirement from football, his former Rossoneri and Italian national teammate recalled their time with each other.

The duo spent 10 years together at the Stadio Giuseppe Meazza, winning the Champions League twice and claiming two Serie A titles in the process.

The pair were also in the World Cup winning team for Italy in 2006.

Pirlo has decided to retire following his two-year-spell with MLS side New York City and Gattuso insists that he knew Pirlo was going to do great things from an early age.

"When I saw Pirlo play, I asked myself if I had to change my profession," he said.

"We started playing for the under 15s and he was a very strong playmaker.

"It was fun to be with Andrea, I hit him more than Bud Spencer did to Terence Hill."

The 38-year-old is yet to reveal what plans he has for the future but Gattuso feels the former Juventus man is not limited for options.

"Whatever he wants, he can train, he can do everything, he has common sense, credibility and knows how to be with others," he added.

Pirlo left Milan for Juventus in 2011 and went on to win a further four Serie A titles.

Dembele could play against Real Madrid

Finnish doctor, Sakari Orava, the man in charge of Ousmane Dembele's operation, hasn't totally ruled out the player making an appearance in the El Clasico match against Real Madrid on December 23.

Orava has maintained that by the middle of this month, Dembele could be back working with the ball again.

"His evolution is faster than I expected," he said to Cadena SER.

"It's possible that he can play against Madrid, but I can not fully guarantee it.

"If he made a major effort there would be a risk of relapse, but everything could be well if he takes it easy."

Nobody at the club is thinking about accelerating Dembele's reappearance because the risks must be minimal.

Following Manchester United's dismal defeat at the hands of Chelsea on Sunday, it was always likely stories about Jose Mourinho would emerge once again, after having previously been linked with a switch to Paris Saint-Germain it seems he is using this interest to pressure his current employers.

Mourinho's current Old Trafford contract only runs until June 2019 and there is a sense that the former Real Madrid coach would like an improved deal as he continues his job of placing United back at the forefront of English football.

According to a report in The Sun, Jorge Mendes has held informal talks with the French giants about the 54-year-old taking over at the Parc des Princes at some point in the future.

The aforementioned report suggests that these talks are all part of a coherent strategy from the Mendes camp to put pressure on Ed Woodward and Co. with regards to handing the Portuguese coach a salary increase.

All is not well for the tactician at Carrington, he is witnessing Pep Guardiola's Manchester City play some of the finest football England has ever seen and is coming in for criticism from sections of his own fanbase for his perceived negative tactics in big matches.

Failing to sign Ivan Perisic in the summer is known to have left Mourinho disappointed. Looking across at Guardiola being given over 100 million euros to spend on three full-backs, he is not being allowed to spend 45m euros on a player he sees as pivotal to the season's success.

Just how important this kyboshed deal is to the coach is not known fully, yet it is clear he will want reinforcements in January.

Another facet of the campaign to pressure the Old Trafford club is to try and get the funding for January signings. It may well be that the 2017/18 championship is Manchester City's to lose, but it can't hurt Mourinho to begin his preparations for the next campaign early.

Generally, it is hard to suggest the former Porto coach has done anything other than a fine job with the Red Devils, in his debut season he took a team that was on its knees to glory in both the League Cup and Europa League.

In his second season he currently sits second in the Premier League and is all-but qualified for the Champions League knockout phase after four matches; it is worth remembering United haven't been in that position since David Moyes was coach in 2013/14.

It is understandable that he would want an increase in pay, although very few individuals have taken on Manchester United over the years and remained in place.