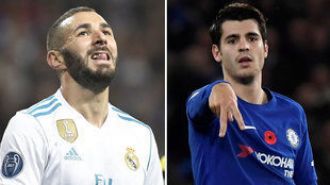 Benzema and the nostalgia for Morata

Real Madrid striker Karim Benzema doesn't have a lot going in his favour at present.

One of the biggest in terms of the latter though is that he should never have chosen the No. 9 jersey. Not in Madrid.

It comes down to aesthetics perhaps but the 9 in Madrid has always been for a predatory striker, a lethal penalty box forward.

It is like dressing as a priest. If you dress as a priest, you are a priest and if you wear the No. 9 at the Estadio Santiago Bernabeu, then you are a goalscorer.

But Benzema is not a goalscorer. He isn't Santillana, Hugo Sanchez nor Ivan Zamorano, although wearing that number almost forces him to connect and be compared with them.

It is the number that should adorn the back of Cristiano Ronaldo, as it once did, but the Portuguese had his CR7 brand to consider and that was the major reason for him swapping numbers.

Although Benzema isn't a favourite among fans, he carries the mystique and air of a man who does enjoy that favour among those in power at the club.

It is a privilege that also seems to extend to the bench but even still, in good times the striker is applauded, although when times are bad, he is one of the first to feel the frustration of fans and those watching.

There's certainly nostalgia for the Chelsea forward. There is a longing for that type of striker, who has always had a place in the Spanish capital.

There is nostalgia for that type of opportunist, enthusiast and intelligent penalty area striker, who is always there to make the most of any little opportunity that comes his way, whether it be with his feet or his head.

None of those things are how many would describe the France international though and it is a mistake to measure him based only on his goals.

In fact, he is one of the best goalscorers in the history of Los Blancos and yet, he doesn't seem it.

Benzema will perhaps be remembered most by thinking about his shortcomings as much as people think about his positives.

Many members and supporters left the Bernabeu on Sunday night openly wondering whether the player who should be at Chelsea is Benzema and whether Morata should have been the man to lead the line against Las Palmas.

Sunday's win in any case was an important one for Real, as Barcelona won once more, Valencia continued to threaten a changing of the guard and Atletico picked up a vital victory of their own.

However, the performance wasn't a convincing one from Los Blancos, they did what they had to do by picking up a win, avoiding injuries, unnecessary cards and, as a reward for those present, got to witness the stunning goal from Marco Asensio.

The boy's left foot was worth the price of admission alone.

But no clear improvement was witnessed in other areas. The first half was a little wooden and lacking in bite, while the second had the joy of that goal, the boos for Benzema and the feeling that something was going to happen any time Isco picked up the ball.

The eight point difference with Barcelona is weighing the club down like an anchor.

The wrongful celebration of Cristiano Ronaldo

In both the good and the bad, Cristiano Ronaldo lives immersed in a world of excess.

He fights against mediocrity at all times, leading him to put on a show before the eyes of the world time and time again.

That ambition, which is evident in each game, has placed him above all other mere mortals, along with Barcelona star Lionel Messi.

The problem is that this excessive taste for being the decisive man in almost everything causes problems at times.

A beautiful Real move on Sunday against Las Palmas culminated in Ronaldo crossing from the right for Isco to slam home but the Portuguese ace turned his back on a group who came to his side quickly to thank him for the assist for the Spain international.

They all made their way to the striker to embrace him instead of running towards the goalscorer, with Ronaldo showing little in response.

Far from sharing the joy of the goal with his teammates on a clinical counter-attack, he hardly looked at the faces of his teammates, those same players who have been decisive in each and every one of the achievements that have led the striker to his place on the apex of history.

The worst of all are those who say that this is not the case and that the private gestures of the player are different and don't always reflect what he shows on the field.

But it wouldn't hurt for the ex-Manchester United man to reconsider and think that Madrid fans would maybe go to sleep a lot happier if they see their hero share the joy of the goal with his teammates.

His teammates appreciate him and they need him but sometimes even they get a little lost with such an attitude.

They don't share these feelings or concerns and know that Ronaldo is essential for them and that the best way for them to deal with the situation is to find a middle ground and help him become a decisive figure once more.

Ronaldo plays football and to this day, it remains a team sport. His teammates need him and he needs them as one against 11 is only possible in comic books.

Reality is different and being the huge professional that he is, he must make it clear with his gestures towards his fellow players.

Valverde whips up the Barcelona merry-go-round

Stability and similarity have been hallmarks of Ernesto Valverde's reign at Barcelona with fans becoming accustomed to the same style and starting eleven, all bar one position.

These nine players provide the core of the team while Sergi Roberto and Nelson Semedo alternate depending on whether a more defensive or attacking right-back is required.

The final slot in the team's attack is where it gets interesting; there is no continuity.

Paco Alcacer was the latest player to jump on the carousel having been sidelined previously and the Valencian was previously expected to be sold this winter but he seized his opportunity by scoring two against Sevilla.

Despite this performance, there is no guarantee he will become a regular starter.

Other players have come in and impressed only to be left out in following matches. Denis Suarez and Gerard Deulofeu are the best examples.

Suarez has already scored this season against Getafe and Eibar but has rarely featured since.

Deulofeu was a star performer at home to Olympiacos in the Champions League and then scored against Malaga and Murcia, but was on the bench for the next three games.

It seems Valverde wants every player in the squad to know that they could feature at any moment.

And some players take better advantage of their opportunities than others.

Andre Gomes has been given a chance and failed to reward his manager's faith with good performances, while Aleix Vidal and Arda Turan have disappeared entirely from the team.

World Cup winner Andrea Pirlo brought down the curtain on his glittering football career on Monday, signing off with a message on Twitter hours after coming on as a late substitute for Major League Soccer side New York City in ther 2-0 win over Columbus Crew.

The 38-year-old suggested last month he would retire at the end of the season and leaves the game with two Champions League titles, six Serie A crowns, the 2006 World Cup he won with Italy, as well as a host of other trophies and honours accumulated in more than 20 years.

"Not only my adventure in NY comes to an end but my journey as a football player as well," Pirlo, who has 116 caps for his country, said in the message.

The midfielder made his senior debut for his hometown club Brescia at the age of 16 before moving to Inter Milan in 1998.

He struggled to nail down a starting place at Inter, where he was deployed behind the strikers, and was signed by city rivals AC Milan in 2001 with doubts looming over his effectiveness.

Pirlo played second fiddle to Rui Costa in his first season at Milan, where like at Inter he was deployed as a 'trequartista', a position where his lack of pace hindered him.

It was only under Carlo Ancelotti the following season that he began to flourish, with the manager's decision to move him to a deeper role just in front of the defence allowing his playmaking talents to come to the fore.

Milan won the Champions League and Italian Cup in 2003 with Pirlo pulling the strings, and the team won the Serie A title the following year as he continued to blossom in the 'regista' role that has since become synonymous with him.

By the time he won the World Cup, Pirlo was being hailed as the world's best playmaker and when his form at Milan began to decline, he was offered a move to Juventus.

He enjoyed a renaissance at the Turin club, leading Juventus to the first of the four consecutive Serie A titles he won with them in his debut season, before moving to the United States in July 2015.

Pirlo helped New York City reach the MLS play-offs in each of the past two seasons, but was unable to add to his trophy haul with the club.

"I would like to... thank my family... every team I had the honour to play for, every team mate I have been pleased to play alongside, all the people who made my career so incredible," he said. "You will always be on my side and in my heart."