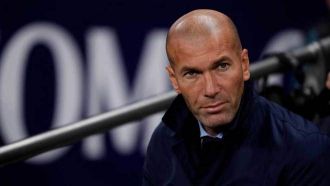 Zidane: Real Madrid are not in crisis

Wednesday evening was not a kind one to Real Madrid as their flaws were exposed and punished by a confident Tottenham Hotspur side, resulting in a 3-1 loss that Zinedine Zidane nevertheless does not believe has his side in crisis mode.

"We are not in crisis," stated the coach to reporters.

"It does not feel like we've been beaten, perhaps we lacked the peace of mind we've always had in front of the goal.

"When you have two chances you should score two goals. Today we did not make chances and we did not score them.

"I'm sure we're going to turn it around, we lost today but this is a very long season. We congratulate our opponent and we reflect on the match. We are all very disappointed."

In his instant analysis of the game, Zidane admitted that Spurs showed their strength at Wembley Stadium but he is optimistic that his Real side can recharge and go again against Las Palmas on Sunday.

"Maybe we are not all performing at the same level, these things that happen," he assessed.

"We have lose two games in a row so we can not be in a good mood, but we have three or four days to rest and then football continues.

"The conclusion I have come to is that we lost against the better team today."

Pochettino: I expected the best version of Real Madrid

It was clear for all to see that Mauricio Pochettino was delighted after his team's momentous 3-1 victory over Real Madrid, the Argentine coach confirming afterwards that he expected to face a much better Los Blancos performance.

A Dele Alli brace and Christian Eriksen's solo strike handed Tottenham Hotspur the victory at Wembley Stadium and it is now Spurs who are the favourites to win the group.

"I expected the best version of Real Madrid," he explained in his post-match press conference.

"My feeling is that to beat Real Madrid, you have to be at your best.

"We have been very competitive, close to our best, and that's why we've gotten such a good result."

After missing much of the continental campaign through suspension, Alli returned to the biggest stage in the best possible manner with his performance praised by his coach.

"It was a great opportunity to show his talent against Real Madrid at Wembley," Pochettino intimated.

"It was his moment, a great motivation for him, and he scored two goals.

Victory on Wednesday saw the North London club secure their progression into the knockout stage of the tournament, which fulfilled one of Pochettino's objectives.

"The most important thing is that we are in the knockout stage," he admitted.

"We have improved this year and with two matches remaining we are already qualified.

"It is important for us to consolidate this confidence, we dream of winning the competition."

A second successive defeat has set alarm bells ringing in the Spanish capital, however Cristiano Ronaldo feels that the current Real Madrid's achievements should not be forgotten during this tough spell.

"People cannot forget the good things that we have done," Ronaldo explained in his post-match interview.

"I do not know what it means to say this is a crisis, people forget the good things we have done very quickly.

"We can lose three or four games but there is never a crisis."

Furthermore, the winger is feeling the effect of not having Dani Carvajal and Gareth Bale joining him in attack, with the pair among a number of experienced men who are either not in the team or have been moved on.

"The players who arrived this summer have a lot of potential," he noted. "Pepe, Alvaro Morata and James Rodriguez made us stronger, but those in the squad today are younger.

"We also need Carvajal and Bale back.

"It is not a worse squad but it has less experience and that is very important. It's not an excuse, I'm happy and the alarms are not going off."

Following Sunday's defeat to Girona, the defending European champions could ill afford another poor performance, yet form is incredibly difficult to find at times.

The Portuguese icon feels that the team are living through nothing more than a bad spell at the current moment.

"Things are bad because we have lost and are used to winning," Ronaldo admitted. "It's a bad patch that we want to change and I'm sure we will change it.

"This is just the beginning of the season, we still have a lot of time to improve."

This is the first real poor run the club have endured since Zinedine Zidane took charge and the French coach is under mounting pressure, although Ronaldo defended his coach.

"What happens in the dressing room stays there," the 32-year-old intimated.

"We are calm in this moment and are all standing by him."

His goalscoring drought in LaLiga has been something of a concern for supporters, yet the former Manchester United star is not worried.

"It's okay, I'm super calm, playing a good match doesn't count for anything anymore, only goals matter," he stated.

"If you go to Google and type 'Cristiano goals' then everything will become clear, I am not worried at all."

Despite putting in one of his poorer performances of the season, Luka Modric believes that Real Madrid will come back from their poor run just, as he claims, they always do.

Modric was left overrun in midfield at Wembley and couldn't stamp his authority on any point of the match against his former club.

"Real Madrid always bounce back," he explained in an interview with BeIN Sports.

"We have had tough situations before and we always come back."

Los Blancos supporters will be concerned by the manner of the defeat, few could see such a heavy loss coming although the Croatian midfielder feels Tottenham Hotspur deserved the win.

"It was a defeat that we did not expect, it is very hard to take," he admitted. "This is football and these things happen, I think Tottenham deserved to win.

"They were much better than us and we now have to go and find solutions to our situation."

One of the issues that has been spoken about amongst fans is a lack of fitness affecting Los Blancos; it must be remembered this squad has played an awful lot of football in the past two seasons.

Modric, though, doesn't subscribe to such a theory and feels the team is in good physical shape.

"I don't think it is a physical problem because we are physically well," he intimated. "We are not playing as we know we can, we have to do everything to recover our form.

"Physically and mentally we are fine but in this game we were not good enough, and we have to find our way."

Following the 5-1 humbling in their previous meeting, Sevilla bounced back by defeating Spartak Moscow 2-1 in what Eduardo Berizzo labelled as the team's best match in the competition this season.

Goals from Clement Lenglet and Ever Banega were enough for the Andalusian side with victory taking the Spaniard's into second place in the group.

"This was our best match in this competition since I've been here," he explained in his post-match press conference.

"We were very good for 75 minutes, we deserved to finish with a 3-0 victory.

"We played with dynamism and were solid in defence, that is was you want."

Victory on Wednesday represented the first time this term that Berizzo's charges have recorded three successive victories, something that left the Argentine coach pleased.

"Football has moments that test your character," Berizzo admitted.

"We have passed these tests with a good attitude, but in football you always have to keep your guard up."

One more victory will secure progression into the next phase for Los Rojiblancos, something that Berizzo was acutely aware of.

"We have two matches left, Liverpool and Maribor," he confirmed.

"We need one more victory.

"Tonight's victory positions us well in the group and now we only depend on ourselves."