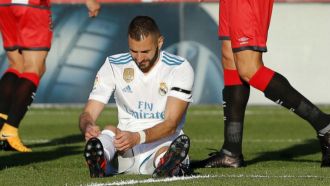 Benzema: I feel sorry for Lineker

Real Madrid and Karim Benzema have not had an ideal start to the 2017/18 season, but few would have foreseen that he would have been surrounded in controversy after criticism from former England striker Gary Lineker.

The Match of the Day presenter claimed that the French international was 'overrated', drawing condemnation from Zinedine Zidane amongst others.

"The criticism from ex-footballers who become journalists, some of who only share their hate, I feel sorry for them, frankly," he responded in an interview with Les Inrockuptibles.

"They have experienced the same situations but don't have solidarity."

Benzema remains focused despite the comments and is determined to impress for France as well as Real Madrid.

"You have to make the most of all opportunities," he said of the 2018 World Cup. "Of course I want to return for France! Which footballer doesn't dream of playing in a World Cup?"

"I try to do my best for my club and we will see at the end. Talking isn't helpful and it can lead to misunderstandings. I don't talk anymore. I try to be successful and win titles."

It has been a long journey for the Real Madrid forward, which he opened up on.

"I began to play very young", he confessed.

"At the start we lived in a neighbourhood without a stadium. Two trees were the goal."

Despite the fact he has grown up, he still appreciates the role that his father had to play in his development too, and still does to this day.

"I come from a difficult place and I was lucky that my dad was always behind me," Benzema added.

"He is the person from my family who comes to see me in Madrid most. He comes to training sessions, games, he's always here."

With January fast approaching, Real Madrid icon Luis Figo has insisted that the club need not rush into the window, all guns blazing.

After a slow start to the season, the Portuguese veteran feels that the Merengues squad is already as good as it can get.

"There aren't any players who could improve Real Madrid," he stated to Bild.

The one-time Barcelona ace was Florentino Perez's first Galactico signing over a decade ago but the former Ballon D'Or winner believes that the club is a very different place nowadays.

"It's different to my era," the winger said. "Before, Madrid gambled on big stars, but the philosophy has changed now,"

"The club gambles now as well, but on young players, on Spaniards."

Discussing his former teammate Zinedine Zidane, Figo is enjoying watching the Frenchman's success in the dugout.

"His current success shows that you can't do any better as Real Madrid coach," he stated, "I'm delighted for him."

With one eye on the end of the season already, Figo also gave his opinion on the favourites for the 2018 World Cup.

"Portugal could be world champions, we have an experienced squad with players who know each other well," he said.

"Germany showed the level they are at in the Confederations Cup, the Germans won with what they called a B team."

Wednesday night will see Real Madrid step out onto the prestigious Wembley Stadium turf to face Tottenham Hotspur in a game that would have been a proud moment for Gareth Bale, were he fit.

A string of injury problems have given continual heartbreak to the winger, who missed large parts of last season, which culminated in the Champions League final in his hometown of Cardiff.

While the stage was set for Bale to lead his side to glory on Welsh soil, he was only available for the bench and made his appearance with the scoreline sealed and just 13 minutes left on the clock.

Things have hardly got better in 2017/18 as niggling issues kept the Welshman on the sidelines as his nation crashed out of World Cup contention, losing at home to Republic of Ireland in their final group match.

And now, with the return game in London beyond him, Bale will have missed out on both matches against his former side as his confidence is tested to the extreme.

Real fans have recently only seen glimpses of the forward, such as his starring role away to Borussia Dortmund in the Champions League, and with his absence until after the international break confirmed, exactly what Bale returns is a big worry.

Perhaps the best thing about a shock defeat when coaching Real Madrid is that the next game is always right around the corner, and Zinedine Zidane is embracing the challenge of facing Tottenham Hotspur on Wednesday.

Los Blancos go into the game off the back of a 2-1 loss in Girona, which left them eight points off the LaLiga summit, but the coach insists that his team have pushed Sunday's result out of their minds.

"Yes [it is a challenge], but it always is," noted Zidane to the assembled press. "I always have the same enthusiasm and passion, the most important thing is to get to work.

"We have had tough moments this season; we do not like the feeling of being beaten but I like challenges, and now we have a good chance to win again.

"I like it when things get difficult, we all just want to win again."

Some had suggested that Real's performance in Catalonia was the worst Zidane had experienced while in the dugout but the Frenchman was keen not to overthink the situation.

"I do not think it's the worst game we've played under me as coach," he added. "This is football, when you lose it's analysed because surely you haven't done very well.

"It's just details, the other day Girona surprised us but we should not think any more about it, we have a game now to get back to playing how we know and that is what we are going to do.

"We are fine, you can think about it after a defeat but on the contrary, we are thinking about tomorrow's match.

"We are ready to play a good game and this is a stage on which we can have a great match."

Mauricio Pochettino has awarded high praise to his adversary ahead of Wednesday night and Zidane returned the favour to the Spurs boss, while intimating that he is not planning on joining him in the Premier League.

"I'm at Real Madrid and I only think about what I'm doing now," he remarked. "You do not know what can happen but now I am comfortable and in Spain.

"I think well of Pochettino, he is doing an exceptional job. Not only do I say it, his results do too, that is what speaks for him."

The game kicks off at 20:45 CET from Wembley Stadium with the two teams neck and neck for points and goals atop their group.

After a shock defeat to Girona on Sunday, Real Madrid put forward one of the team's leaders to face the press as Marcelo discussed the result and the upcoming tie with Mauricio Pochettino's Tottenham.

The full-back made it clear that his team could not take any game for granted in LaLiga with a single defeat not enough to ruin their confidence.

"A league game is difficult to win whoever it's against. Many people think you can just turn up and win," he told the assembled media.

"We will improve, don't go crazy. We have a lot of games left to put Real Madrid where they have to be: above everyone."

Marcelo was one of those criticised for underperforming at Estadi Montilivi and he seemed to have his own diagnosis of the main issue.

"It happens sometimes that you relax a little. Last year it happened but at the end we scored," he admitted.

Now, attentions will turn to Wembley Stadium. That may come as a relief for the players in Zinedine Zidane's squad.

"We give our all to win every game, but it's clear that everyone wants to play in games like these," Marcelo revealed.

"Maybe it's the motivation of every player, you go to the Champions League and you can't explain it."

One of his opponents could be Harry Kane, but Marcelo refused to build up the importance of the England striker.

"[Kane] is a great player but he isn't the only one in Tottenham," he noted.

Finally, it was obvious for all to see that the defender and his team mates are determined to make up for their weekend defeat.

"When you lose a game you are sad. We know what he did wrong and we will try not to make the same mistakes," he assured fans.

Against Kane and his Tottenham team, Real Madrid will have to improve.

Without a goal in the previous five games, Manchester United striker Romelu Lukaku was quick to grab the ball when his team were awarded a penalty in the 78th minute of their Champions League game against Benfica.

United were 1-0 up and had already missed one penalty, a soft effort from Anthony Martial saved by Benfica's 18-year-old keeper Mile Svilar.

But with Lukaku ready to end his barren spell and secure the win, United manager Jose Mourinho signalled he wanted someone else to take the spot-kick.

Spanish subsitute Ander Herrera showed his willingness to take the kick but still Mourinho was not happy until his clear choice, Dutch defender Daley Blind was given the ball and drove confidently down the middle.

It was an unusual scene but Mourinho said it was simply the boss doing his job.

"I am paid to take decisions - good or bad. In the first half the decision was bad because the player I chose to take the penalty missed," he said.

"In the second half I made another decision and I don't see the drama. The penalty taker for this match was Martial, he took it in the first half and missed and he was not even on the pitch for the second one.

"Then I have to make a decision. Romelu wants to take, he had the personality to take the responsibility, Herrera the same but my decision, based on what we did in training in the past couple of days, was Blind. The players respected my decision and that is it - end of story."

While United were far from their best, Mourinho said he was pleased to have picked up a fourth win in four games in Group A.

"We have not qualified yet? Four victories and it is still not enough? We must get that point from the two remaining matches," he said.

"I am more than happy. We changed a lot of players, we broke the natural dynamic and routines of the team and we played a kid (Scott McTominay) from the academy.

"We scored two goals, did not concede, gained three more points, more money for the club because every victory means money and did not have any significant injuries."

Email : [email protected]
Προηγούμενο : Ramos: It would not be the first League in which they've thrown away eight points | Επόμενο : Zidane: Real Madrid are not in crisis
Προβολές : 530
- 7674 προηγούμενη ημέρα