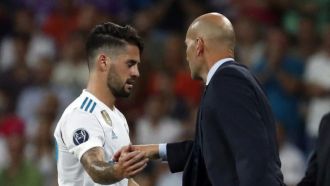 Zinedine Zidane is getting the most out of his squad with his rotations but the extent of the changes for the Eibar game last weekend was still a surprise.

He started Nacho and Theo Hernandez on the wings with Dani Ceballos and Marco Asensio also coming into the side following the Champions League clash with Tottenham Hotspur as Achraf, Marcelo, Toni Kroos and Benzema made way.

Five changes in total, including goalkeeper Kiko Casilla, as Zidane continued the policy of rotations that was so successful last year where 20 different players started matches. He has made 52 changes in the 15 matches this season since the European Super Cup against Manchester United, which is almost a rate of four changes from one game to the next.

Some of these changes, admittedly, have been forced by sanctions (Cristiano Ronaldo, Sergio Ramos and Lucas Modric have suffered from them), and others by injuries (up to 11 footballers have missed more than one match). Despite this, Zidane has taken advantage of using his entire squad, creating a very competitive Real Madrid side.

There were seven changes made in Los Blancos' Champions League debut match this season. Madrid faced APOEL after the international break, and the French coach was successful in his modifications, claiming three points in the group stage.

In addition, there have been four changes in their matches against Deportivo de La Coruna, Real Sociedad, and Deportivo Alaves while there were three alterations against Barcelona, Real Betis, and Borussia Dortmund.

In their first LaLiga victory at the Estadio Santiago Bernabeu against Espanyol, Zidane made two amendments to the line-up. However, in their away matches against Barcelona at the Camp Nou and Valencia at the Estadio Mestalla, the coach barely made any changes to the starting 11 players.

Isco is the footballer with the lowest completion rate of the full 90 minutes. Only in 15% of occasions has the midfielder played from the initial start until the final whistle. Meanwhile, Mateo Kovacic, Karim Benzema, Lucas Vazquez and Marco Asensio are the players that have not reached 30% off the full matches.

However, it is the opposite for Sergio Ramos. In 70 of his 78 appearances, the defender played every minute in 89% of those matches. Raphael Varane has an 87% completion record, Cristiano Ronaldo an 86%, Dani Carvajal an 83%, Marcelo an 82.5%, and Nacho an 80%.

Against Eibar it was a continuation of the same policy. There were more rotations and during the match, Benzema entered for Isco while Lucas Vazquez got some playing time as well. These are the laws of Zidane.

Cristiano Ronaldo Jr. and Messi: The story of a friendship that seemed impossible

On Monday night at the London Palladium, Cristiano Ronaldo Jr. again became the star, and even continued his friendship with his father's rival, Lionel Messi.

Since appearing in the galas that recognise the best players in the world, including Cristiano Snr., he moves with ease amongst the great and the good of the football world.

The youngster has won many friends, including a very special one; Leo Messi.

During Monday night's gala, Cristiano Jr. looked on with admiration at the Barcelona player, moments before his father was crowned as 'The Best.'

Messi was laughing next to Neymar with the boy continuing to hold his gaze.

The most touching moment came when Cristiano Jr., his father and Messi took their seats in the London theatre.

It was a meeting of the two amigos.

Minutes before the start of the gala, and as if they were friends, the youngster threw his hand out to Messi and then started to talk about his things naturally.

They exchanged greetings and gestures and then came the greeting between his father and the Barcelona No.10; but it was Junior who broke the ice.

Back at the 2015 gala held in Zurich, Ronaldo pointed to Messi and both talked about the goals scored at Barcelona.

The little boy recognised the Argentinian and began to talk as if nothing happened, in a gesture that yesterday was repeated in London.

This time, he was surrounded by football stars such as Marcelo, Modric, Bonucci, Iniesta, Zidane and Vialli, all of whom enjoyed such a joyous scenario.

Manchester City may have won on Tuesday evening against Wolverhampton Wanderers but the contracted nature of the performance had Pep Guardiola's focus squarely aimed on the match ball.

Mitre's ball is for use solely in the Carabao Cup and the Spaniard feels that it's not up to scratch.

"I say this because we won, not as an excuse," he began.

"It is not a serious ball to play a professional game with footballers of this level.

"Having trained for two days with it, it is unacceptable. Many players have complained."

Even Yaya Toure spoke out against the Mitre ball after the goalless draw was won by City 4-1 on penalties.

"The players hope to use good balls, today was difficult," said the midfielder.

"That ball takes me back to Africa, nobody wants it. It's very bad."

Gareth Bale has the Champions League clash with Tottenham Hotspur clearly in his mind and he sees the LaLiga clash with Girona as an opportunity to prove his fitness.

Ever since the draw was made on August 24th, Bale has been looking forward to the chance to face his former club and he is desperate to recover from the calf injury that has kept him out of action for 28 days so far.

It was expected that he would be missing for a month and that is about right as he is now able to exercise with a ball on the pitch, with the next step to rejoin his teammates. It is possible that this next step could take place today although it is Friday that has been marked down by the coaching staff.

If all goes according to plan then Bale could travel to Girona and play some minutes that would give him a platform to build on ahead of the Spurs game.

Clearly he won't be a starter against Tottenham due to his fitness level and also because Zidane is planning to play a four-four-two system with Isco in midfield.

The treatment room is clearing

With Bale soon to be back, gradually the treatment room with just Carvajal and Kovacic the pair who still don't have a return date pencilled in.

Inter Milan raced to a three-goal lead against Sampdoria then nearly threw it all away as they clung on for a 3-2 win which took them top of Serie A, at least for 24 hours, on Tuesday.

The win put them on 26 points from 10 games with eight wins and two draws, one point ahead of Napoli who visit Genoa on Wednesday. Samp are sixth after their second loss of the season.

Inter defender Milan Skriniar, who joined from Samp in the close season, got the opener in the 18th minute by scrambling the ball home from a corner and declined to celebrate.

Ivan Perisic was desperately unlucky to hit the post with a clever lob from midfield after catching goalkeeper Christian Puggioni off his line before Icardi added the second with a perfectly timed volley in the 32nd minute.

Icardi then hit the post with a header before halftime and it seemed to be all over for Sampdoria when the Argentine struck again with another volley in the 54th.

Perisic hit the bar just past the hour before Dawid Kownacki pulled one back in the 64th minute and Fabio Quagliarella then scored another for the visitors with five minutes left.

It was now panic stations for Inter as Quagliarella just missed Gian Marco Ferrari's cross and Gianluca Caprari fired over the bar before Skriniar came to the home side's rescue with a sliding tackle to stop another effort on goal.