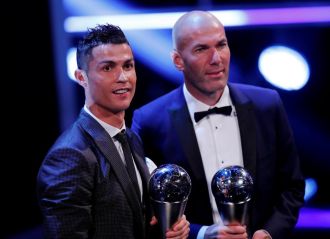 Ronaldo beats Messi and Neymar to be voted best player

Cristiano Ronaldo was named FIFA's player of the year ahead of Lionel Messi in the second edition of 'The Best' Awards, held in London.

His achievements at the end of last season, where he hit ten goals in the final five games of the Champions League and helped Real Madrid to win the tournament, have been recognised.

In his personal battle with Messi, he now has two of the new FIFA awards to Messi's zero, while the Argentine has five Ballon d'Ors compared to Ronaldo's four ahead of the naming of this year's winner in December.

The pair have dominated the awards in recent years with Ronaldo coming out on top in the past two years as Real have won back-to-back Champions League trophies and three from the past four editions.

He was presented with the award by Diego Maradona and he paid tribute to his teammates.

"It is great to be here, surrounded by these great players," he said.

"It is an award for consistency, work and the effort of the team.

"It is a dream to be in the best team for 11 consecutive occasions, and these types of trophies."

Zidane thanks players for helping him win best coach award

Zinedine Zidane paid special tribute to the Real Madrid players for making it possible for him to win FIFA's best coach award.

He was picked ahead of Massimiliano Allegri and Antonio Conte of Juventus and Chelsea respectively.

"This award is also for Allegri and Conte," said Zidane.

"I never would have thought to have something so beautiful.

"Thank you to all the coaches but especially the players, this is all yours. Today I won, but you are responsible."

He also expressed his gratitude at having been given the opportunity to coach at Real.

"Thank Real Madrid because I have been given the opportunity to train these players," he explained.

"Thanks to Real Madrid for giving me the chance to be here."

Finally, before he left the stage he gave a special shoutout to his wife who has been with him from the start.

"Thanks to my wife, I love you very much," he continued.

"You are always there with me and with the family."

Neymar: I will always have Barcelona in my heart

Neymar was reunited with his old teammates Lionel Messi and Andres Iniesta at FIFA's The Best Awards and he declared he still has warmth and respect for his former club Barcelona.

Accompanied by his Paris Saint-Germain buddy Dani Alves, the Brazilian spoke before entering the gala and recalled his past with the Catalan club and what it means to be present at such prestigious events.

"I will always have Barcelona in my heart," he said in a recent interview.

"I had a great season at the club and I cannot forget it, but now we have to think about something else.

"It's important to be here, alongside the best."

The striker also opened up about his red card during his side's last weekend visit to Marseille.

"Things like that should not happen, it was not a football game and I hope I do not fall into error again," he explained.

There was a warm embrace between Argentine legends Diego Armando and Lionel Messi at FIFA's The Best Awards gala in London.

Maradona, always controversial, has spoken positively and negatively about Messi over the years and coached him at the 2010 World Cup.

They had a friendly chat ahead of the ceremony.

One year later and Cristiano Ronaldo is once again 'The Best', overcoming Lionel Messi by an even bigger margin than he did in the first edition of the prestigious FIFA award, in 2016.

Ronaldo enjoyed 43.16% of the vote which was made up of players, coaches, journalists and fans from all over the world, whilst Messi received 19.25% and Neymar finished third with just 6.97%.

This year, Ronaldo has been even better than his great rival according to the football world's experts.

Meanwhile, in his respective category, Zinedine Zidane gained an even higher proportion of the vote than Ronaldo with 46.22%, seeing off runner-up Antonio Conte with 11.62% and third-placed Massimiliano Allegri (8.78%), as the Frenchman was named the world's best coach for 2017.

When it came to the world's best goalkeeper, Real Madrid's Keylor Navas finished second to Gianluigi Buffon as the Costa Rican international earned 32.32% of the vote to the Italian's 42.22%, while Bayern Munich's Manuel Neuer managed 10.10%.

In other news, Olivier Giroud won the prize for goal of the year with a 36.17% share.

Letter to Guardiola from Barcelona fan: Pep, you're making a mistake!

Fernando Saiz, a Barcelona fan and the former Chief Editor of Expansion newspaper, has published an open letter to Pep Guardiola in response to the Catalan's recent remarks about the imprisonment of Jordi Cuixart and Jordi Sanchez.

"Dear Pep: I am writing to you because I have read your statements about the pre-trial detention of the Jordis," he wrote.

Saiz continues to offer a description of his own background, explaining that he is from Barcelona and has lived in Madrid, 40 metres from the Santiago Bernabeu, for over 35 years, and explains that he defends the opinions of independence supporters, and even the actions of Gerard Pique.

"I am not an independentista or anti-independence," Saiz adds.

Continuing, he disputes Guardiola's suggestion that the Jordis are imprisoned for their ideas, and questions how closely the Manchester City boss has been following the situation, stating that he thinks the coach is more intelligent than to think that.

Eventually, Saiz reaches the ultimate point of his letter, which is to outline three of his own personal concerns about what is already occurring, or could yet occur because of the situation surrounding Catalonia.

1. Disaffection between Spanish and Catalan.

The unrest towards Catalan is latent in Madrid and other parts of Spain.

"It has been exacerbated, and I guess the reverse is the same.

"The tear in the coexistence between you and Catalans is, if possible, even more disturbing. We are one step away from the outbreaks of hatred, which have already appeared, transforming into a jungle of grudges."

2. The distrust of economic agents.

"The clock of the economy is a very delicate machine and as soon as it starts to enter even a little water - let's call it uncertainty - everything stops.

"This spiral has already become activated in Catalonia and sooner or later it will move to the rest of Spain."

3. That Messi has to leave the club. Do you understand me, Pep?

"I want to ask you to defend your thoughts, but with responsibility.

"You are the only authoritative reference for Catalan independence around the world.

"Use your head, generate hope and not despair.