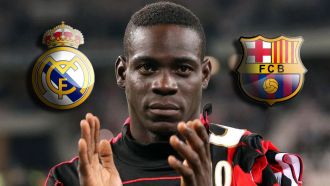 Balotelli: I like Real Madrid, but if Barcelona call me I wouldn't cry

A move to LaLiga is certainly of interest for Nice forward Mario Balotelli, who has remarked about which Clasico team he would prefer to play for.

Although he admitted he isn't too fussy, Balotelli stated Real Madrid as his ideal destination.

"I like Real Madrid, but if Barcelona called me I wouldn't cry," joked the Italian.

Balotelli also admitted that he considered signing for Juventus before Milan vice-chairman Adriano Galliani persuaded him to come to Lombardy in 2013.

"First I talked to Juventus but then I decided to sign for Milan," he added.

"I was a fan of the Rossoneri and Galliani was there, with whom I get along."

Neymar sent off but Cavani salvages PSG draw at Marseille

Neymar was sent off before his team mate Edinson Cavani proved his worth once again with a last-gasp equaliser that salvaged a 2-2 draw for leaders Paris St Germain at bitter rivals Olympique de Marseille on Sunday.

The Uruguay striker levelled one minute into stoppage time with a superb 20-metre free kick after Neymar had been dismissed in the 87th minute for two yellow card offences in quick succession.

Neymar had earlier cancelled out Luiz Gustavo's opener before halftime but lost his cool in the closing stages after Florian Thauvin had put the home side ahead in the second half, threatening to inflict PSG's first defeat of the season.

Then Cavani, who has often been criticised for supposed lack of efficiency, netted his ninth league goal of the season to earn the draw that puts PSG on 26 points from 10 matches.

"It's an important goal because the game was almost finished but at least we salvaged a point," said Cavani.

Monaco are second, four points behind on 22 points after beating Caen 2-0 on Saturday.

Marseille are fifth on 18 points as they were leapfrogged into fourth on 19 by Olympique Lyonnais, who hammered Troyes 5-0 away with a Memphis Depay hat-trick.

In a boiling hot Velodrome, Marseille went ahead on 16 minutes when Gustavo beat Alphonse Areola with a 25-metre strike to give Marseille a deserved advantage after a solid start.

Cavani squandered an opportunity to equalise one minute later when he missed the target from close range from a Layvin Kurzawa cross.

Neymar levelled with his first opportunity in the 33rd as he collected a clever cross from Adrien Rabiot to beat Steve Mandanda with a left-footed shot.

PSG had the upper hand but the hosts defended well to preserve the score until halftime.

Kylian Mbappe was handed a yellow card for protesting after a Jordan Amavi handball in the box as PSG's frustration grew.

In the 78th minute, Clinton Njie, who came on for Konstantinos Mitroglu in the 65th, grabbed the ball from Rabiot on the right flank and Thauvin latched onto his cross to put the home side ahead.

Neymar was booked in the 85th minute for dissent and two minutes later reacted angrily after being fouled, only to be shown the red card. He will miss next weekend's home game against Nice.

In his absence, there was no debate about who would take the final free kick in injury time as Cavani preserved the leaders' unbeaten record.

Reinstalled to the starting XI for Real Madrid on Sunday night, Marco Asensio repaid his manager's faith by scoring his first goal in 56 days.

Since netting past Valencia on August 27, the Spaniard had struggled to find his optimum attacking output until hitting form again versus Eibar.

Before firing in Isco's set-piece during the first half at Estadio Santiago Bernabeu, Asensio had also assisted the opening goal that went in via Paulo Oliveira's head.

Mauricio Pochettino allayed fears that Harry Kane had picked up an injury during Tottenham Hotspur's win over Liverpool on Sunday but said he was likely to give the "tired" England striker a rest in midweek.

Kane finally broke his Wembley duck in the Premier League with a double as Spurs eased to a 4-1 victory over Juergen Klopp's side but appeared to limp off late in the match when being substituted.

However, while saying there was no early sign of injury, Pochettino reckoned Kane was suffering from fatigue, which may persuade him to rest his prolific striker for the League Cup derby with West Ham United on Wednesday.

"Harry put in another amazing display, he is amazing, one of the best in the word," Pochettino said. "Injury? No, he was tired at the end. He has put in a massive effort -- Bournemouth, Real Madrid and today. No problem.

"We may rest Harry in the week, we have many games. Man United, then Real Madrid and Palace. Don't forget he also played two games for the national team. He is so professional, but he is not a machine and maybe Wednesday he has to rest."

Decision not in my hands says under-pressure Koeman

Everton manager Ronald Koeman believes he can turn around the struggling club's fortunes but admits his future is no longer in his hands.

A 5-2 loss at home to Arsenal on Sunday saw Everton slip into the bottom three in the Premier League and the Dutchman's job now hangs in the balance.

"I don't know, I told the players I believe in them, in their commitment. The decision is not in my hands," Koeman said after the game when asked if it had been the sort of result that could cost him his job.

"We are not in a position in the table that is good for Everton, I understand (but) I have been in football a long time, don't tell me what can happen. I don't think it's too late."

Asked whether he felt he could still turn around Everton's season, he added: "If you start to think negative then maybe there is no solution. I am not like that.

"I still believe I can change the whole situation but everybody knows how it works in football. That is all I answer about this situation."

Koeman struck a tone somewhere between quiet resignation to his fate and a lingering determination to find a way out of the team's rut which has seen them pick up just two wins from their opening nine games.

"Write what you like to write," he told reporters.

Everton defender Michael Keane said the players were strongly behind Koeman and were disappointed not to have delivered better results and performances for him.

"It's down to us, the manager can only do so much. We have 100 percent belief in him. We feel like we've let him down. We're working really hard to sort it out," he said.

But centre-half Keane, one of a series of big money signings prior to this campaign, conceded the team's confidence has been hit by their poor campaign.

"I think so. Normally everyone would want to get on the ball and show what they can do. Maybe you're not seeing that now. It was a difficult day," he added.

After taking the lead through a fine Wayne Rooney strike, Everton were largely outplayed and went 2-1 down before Idrissa Gueye was sent off in the 68th minute and the Gunners took full advantage of the extra man.

"The sending off of Gana made it really difficult. It was already difficult against 11 and it was impossible at 10 against 11," said Koeman.