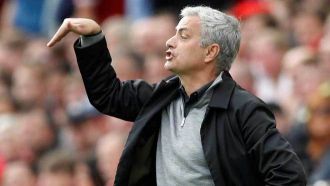 Mourinho: Maybe someday I'll tell the truth of why I didn't sign for Barcelona

When Pep Guardiola took over at Barcelona in 2008, it ushered in the most successful period in the club's history, but Jose Mourinho was considered for the position and the Portuguese has suggested that he might eventually reveal the reasons why he didn't join a club he'd worked for under the late Sir Bobby Robson.

Indeed, the current Manchester United coach has even gone as far as suggesting the the 'real truth' needs to be told.

"These are things about my career that I prefer to keep for myself," he said in an interview with the French television show Téléfoot.

"Maybe I'll talk about it one day when I'm old, very old."

The 'Special One' also went on to say that his coaching career will not end at Manchester United.

Once his relationship with the English team is over, he will continue elsewhere and hasn't ruled out Paris Saint-Germain as his next destination.

"The only thing I can say is that I'm still a coach with concerns, ambitions and the desire to do new things," he continued.

"I'm sure I will not end my career here at Manchester United.

"The other day, my son, who lives in London, went to Paris to see a PSG match and not to Manchester.

"Why Paris? Because it has something special.

Isco to the rescue again

He scored both goals against Espanyol in the 2-0 victory, and on Saturday, his delightful pass sent Cristiano Ronaldo scampering away to fire in the winner.

Zinedine Zidane wanted to give him a rest after a busy week with the Spanish national team, with which he was also the most outstanding player, but the Frenchman had to use him to win the match.

Madrid were drawing in Getafe and LaLiga was looking even more of a pipe dream with just 20 minutes to go.

Isco came on in the 71st minute and on 84, he played his trump card.

His pass over the defence left the Portuguese with only Guaita to beat, which he did with aplomb.

"The changes worked very well," admitted Zidane at the end of the game.

In 20 minutes, Isco played 24 passes of which 22 were completed, and aside from his assist he was also fouled twice and completed two dribbles.

Numbers that speak for themselves.

On Tuesday against Tottenham, Isco will return to be part of the starting lineup along with Luka Modric, who didn't play even one minute against Getafe.

Valverde changes the course of matches

Surprise was the overriding feeling amongst many Barcelona supporters when it emerged Andre Gomes had been put into the starting line-up against Atletico Madrid, yet Ernesto Valverde has the habit of changing the course of matches.

The context within which this decision was made is important, as Barcelona have yet to really be tested in LaLiga this term.

For their biggest match so far, a player few consider as important was drafted in and the former Valencia midfielder found it difficult to make his mark, having barely played 100 minutes in the previous 11 matches.

This is where the former Athletic coach made his impact felt though, as after the break he reinforced the right hand side with Sergi Roberto and Gerard Deulofeu.

Shuttling up and down the right flank impressively, Roberto played a hand in the equalising goal, providing a perfect cross to Luis Suarez at the back post.

The increased physicality in the team helped Los Cules impose themselves on the hosts and it also took attention away from the Portuguese midfielder who then had more space to work with on the left.

Paulinho has also added another dimension to the Catalan giants' attacking play this term and was an influence yet again.

For the goal, the former Tottenham Hotspur midfielder's run into the penalty box actually took Stefan Savic away from Suarez.

Barcelona showed two different faces on Saturday, in the first half they struggled and were inefficient, yet in the second they were much better, mainly thanks to the tactical tweaks made by Valverde.

This isn't an isolated instance either as in the match against Getafe the 53-year-old brought on Paulinho and Denis Suarez whose goals would win the game.

Barcelona are bossing all the leagues in Spain

The motto 'mes que un club' that has always accompanied Barcelona throughout its history resonates now more than ever, with the club as leaders in seven of their sporting disciplines.

If we talk about football, Ernesto Valverde's team are out on their own at the top of LaLiga, after having dropped only two points from a possible 24.

The futsal team are in a similar position after winning five out of five from the start of the season.

In the rest of the competitions, the Blaugrana are not the sole leader but they head their respective tables by having a greater goal difference.

Barcelona women's football team have 18 points out of a possible 18 and with a balance of 27 goals scored and only one against, it's a difference that edges them above Atletico Madrid.

In basketball, the large margin of victory over Obradoiro sees Barcelona top despite being level on points with Real Madrid and Montakit Fuenlabrada.

Sharing the top spot in the Asobal League is the club's handball team, on 12 points with Helvetia Anaitasuna.

The roller hockey and volleyball teams both have two wins and six points from their two games and sit atop their leagues too.

Modric: All of Real Madrid's recent success is down to Zidane

Since arriving at Real Madrid from Tottenham Hotspur, it has not always been smooth sailing for Luka Modric but in recent seasons he has proven his importance to the European champions and has become one of the team's most important players.

Along with Toni Kroos, the Croatian is key to any success that Real have and if he is on his game, then the sde are as well.

"We were all excited that a Real Madrid legend was going to be our coach," Modric told the UEFA website about Zinedine Zidane's appointment.

"Having him lead training every day is special and we all enjoy it.

"The things we have achieved these years is down to him and he has created a fantastic atmosphere at the club."

As well as discussing Zidane, Modric spoke about his arrival in Spain and he said that once Real Madrid came knocking, there was only one place he wanted to go.

"After four years at Tottenham, where I hit the ceiling, I needed new challenges to take my career to the next level," he added.

"Real was the ideal club for me and when I heard they were interested there were no other options.

"Playing at the Bernabeu is special, it is the most beautiful stadium in which I have played and I hope it lasts for many more years."

Newcastle United manager Rafael Benitez said his team needed to defend better and control more of the ball after twice surrendering the lead in a 2-2 draw with Southampton in the Premier League on Sunday.

Isaac Hayden gave Newcastle a first-half lead with a shot on the rebound but the visitors were pegged back when Manolo Gabbiadini was allowed to turn Javier Manquillo and shoot low past goalkeeper Rob Elliot.

Ayoze Perez's angled shot put the visitors back in front and on course for victory, only for Florian Dejeune to needlessly bring down Shane Long in the box and allow Gabbiadini to equalise for the second time, from the penalty spot.

"We gave them the chance to score with the penalty. We did well but still conceded two goals, so something was wrong," said Benitez, whose side had only 38 percent of possession.

"We have to work hard, keep improving. We have to defend better, attack better and keep the ball better."

The result kept Newcastle ninth in the Premier League, while Gabbiadini's brace lifted Southampton to 10th and ensured they avoided a third consecutive defeat at home.

Southampton manager Mauricio Pellegrino said: "The reaction was good at the end -- our best 20 minutes.

"We never controlled the game totally. I knew it would be difficult but one point is a positive."