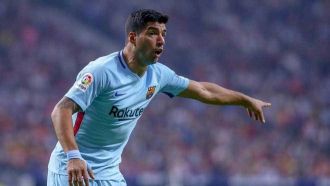 Barcelona came away from the Estadio Wanda Metropolitano with a creditable point, though Luis Suarez believes they would've taken all three if it wasn't for Jan Oblak.

Atletico Madrid's goalkeeper was once again equal to almost everything that the Blaugrana had to throw at him.

"Everyone knows that Atletico defends very well and has a great goalkeeper that shows up in every game," Suarez said to reporters after the game.

"We deserved to take all three points."

Despite the disappointment of not matching Tata Martino's record of eight straight wins from the start of a LaLiga campaign, Suarez agreed it was still a valuable point at a tough rival.

"After being behind for almost the entire game, it's not a bad point," he continued.

"It also comes against one of our rivals that will be fighting for the league."

Valverde: It was a good dinner for everyone

After Barcelona had claimed a well-deserved point at the Estadio Wanda Metropolitano, coach Ernesto Valverde remarked that both teams had put on a great show, referring also to opposite number Diego Simeone's pre-match comments.

Saul Niguez had put the hosts ahead early on, but a late header by Luis Suarez saw the Catalans unbeaten start to the season continue.

"It was a good dinner for everyone, because there was a great show," Valverde said at his post-match press conference.

"I said that we were going to adapt and we did adapt."

There had been a suggestion that Suarez's celebration was unsportsmanlike, but his coach didn't see it that way.

"I didn't notice, but I don't think my players are unsportsmanlike," he continued.

Having exerted himself fully in Argentina's World Cup qualification in midweek, many expected Lionel Messi to be drained, but Valverde was happy with the No.10's contribution.

"It's true that Leo had some wear and tear because of the tension of the matches he has had to play, but we know that he always responds in any situation," he noted.

"He gave us a lot of effort and it was clear that when he got the ball, something good could happen for us."

Marcelo: Cristiano Ronaldo is always decisive when he has to be

Despite enduring a tough 90 minutes at Getafe, Real Madrid emerged victorious thanks to Cristiano Ronaldo's winner, and colleague Marcelo noted that the Portuguese always shows up for the big moments.

The victory also meant that Los Blancos set a new LaLiga record of 13 consecutive away wins.

"We know what he [Ronaldo] can give Madrid," the Brazilian said to reporters after the game.

"He might not score in two games ... but he's always decisive when he has to be."

Just like against Barcelona, the hosts made life difficult but succumbed late in the day.

"It's a difficult ground and players are always more motivated against us," he continued.

"But we played well and what matters is that we have done a great job."

Getafe had deliberately left the grass longer than normal which may have hampered Real's passing game.

"Everyone has to adapt."

Chelsea fell behind to a Cesar Azpilicueta own goal in the 11th minute and although Tiemoue Bakayoko equalised seven minutes later Wilfried Zaha scored a winner for Palace on the stroke of halftime.

Conte was without the injured Alvaro Morata and N'Golo Kante and his problems mounted when Victor Moses limped off midway through the first half.

"We played this game without three important players and that's not straightforward," Conte said. "We started very badly and it was a very difficult day.

Chelsea have now lost three of their eight Premier League games this season, including both of their past two matches -- the first time they have suffered back-to-back Premier League defeats since April 2016. They are on 13 points from a possible 24.

"We have to go game by game and this season will be very difficult in all aspects," Conte said. "At the end of the season we'll see what has happened but we are trying to build something important for the future.

Liverpool could never be as defensive as United says Klopp

Liverpool manager Juergen Klopp said he could never get away with the cautious tactics used by Manchester United counterpart Jose Mourinho in Saturday's 0-0 Premier League draw at Anfield.

"Manchester United came here for a point and got it," the German said in a TV interview. "For sure you could not play this way at Liverpool but it's OK for Manchester United."

Asked later at the post-match press conference to expand on his thoughts about Mourinho's tactics, the German, whose team still trail United by seven points, was more diplomatic.

"I said it was obvious they had a more defensive approach, I think that was obvious, but that's completely fine," he said.

"After the game, it looked to me like they wanted a point; if they could get three, they would take it of course, but we wanted three.

"So they are happy and we are not happy. That's easy. But it's a home game so we should be dominant. I'm OK with the performance. It's not my job to judge the Manchester United performance," he added.

Klopp said that while he was disappointed not to pick up all three points, he was pleased with the way his team performed against one of the title favourites.

"For me, a team who can become champions this year was at our stadium and it was not a world apart from us. It's not that we play on different planets, it's not that they are really good and we don't find the entrance of the stadium. It's OK and we will carry on," he said.

"If you watch the game and you have an idea of football, you cannot expect that we create 20 chances against Manchester United - it's just simply not possible. Barcelona on the best day would not do it.

"You will see, United will not lose a lot of games in this season," he added.

"If you want to be happy today you can be happy, but if you think, 'OK, again not too bad...' - which is probably my view on it - then you can be in this mood and carry on," said Klopp.

Mourinho suggests Klopp as much to blame for bore draw

Manchester United manager Jose Mourinho rejected the idea that his team went to Liverpool for a point and said Saturday's 0-0 Premier League draw reflected Juergen Klopp's tactics as much as his own.

United, who moved to 20 points from eight games, showed little ambition to attack and did not manage a single shot on goal in the second half but Mourinho said he had been waiting for Klopp's side to open up in search of a win.

Asked if a point was his target in the game, Mourinho said: "No, we came for three but in the second half we felt (it was) difficult to do that with the match, the dynamic as it was.

"I was waiting for Juergen to change and go more attacking but he kept the three strong midfielders at all times, where he was having control because I had only (Ander) Herrera and (Nemanja) Matic," said the United manager.

Mourinho noted the absence of midfield options from the United bench, caused by injuries to Paul Pogba, Marouane Fellaini and Michael Carrick, but also defended his approach by highlighting that he had brought on attacking players Jesse Lingard and Marcus Rashford in the second half.

"When I brought on Lingard and Rashford I was waiting for him (Klopp) to give me more space to counter but he didn't give me. So I know that probably you think we were defensive and they were offensive - well, you are at home and you don't move anything. I don't know? I was waiting for that and he didn't. I think he did well, honestly.

"The game was never broken, they pressed high, they recovered the ball, so I think they were very good by the defensive point of view.

"The only chance I had to change the direction of the game was to bring on players for one-on-one, players with speed and maybe they are going to change (the game), but they didn't," added Mourinho.

However, the Portuguese manager seemed unconcerned that such a highly anticipated game had ended in a dull stalemate, which left Liverpool seven points behind United.

"For me, the second half was a bit of chess, but my opponent didn't open the door for me to win the game."