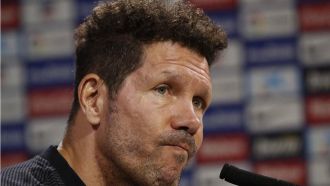 On Saturday, Diego Simeone faces one of the few teams that he has yet to beat. It's 11 LaLiga games and counting for the Argentine who will be desperate to finally get one over Barcelona.

The stats look grim for Simeone: eight losses, three draws and no wins - although on the European stage things looks better, where he's beaten them twice.

While Zinedine Zidane's Real Madrid, Pep Guardiola's Bayern Munich and Jose Mourinho's Chelsea have all been beaten by El Cholo, Barcelona are the one giant that has caused continuous problems.

Aside from Valencia boss Marcelino, Simeone is the coach who has faced the Catalans the most times without recording a win in the league.

Since the Argentine has been at the helm of Atletico, matches with Barcelona have been heated and closely fought encounters.

In the last 11 games at the Estadio Vicente Calderon, his team could only score at a rate of one goal every two matches.

And Barcelona, as ever, dominated possession.

Atletico have always had a sound defensive structure but the quality of Lionel Messi, Luis Suarez and Neymar more often than not found a way to score.

Trying to combat this prolific strikeforce has taken its toll on Atletico. They have registered an average of only three shots per game on the Barcelona goal.

With such a weak strikeforce, pressure has been on the forwards to feed off scraps.

But this weekend offers a glimmer of hope as a familiar face will be in the opponent's technical area. Indeed, Ernesto Valverde is a coach who Simeone has never lost against. In nine league games, he has won six and drawn three.

Therefore, Simeone's Barcelona hoodoo could be coming to an end.

Valverde on Simeone pitch jibe: Barcelona will adapt to the menu, the dishes, everything

Any difficult circumstances Barcelona are faced with during Saturday's match at Atletico Madrid, they will deal with, according to coach Ernesto Valverde.

The Spaniard's opposite number, Diego Simeone, had remarked about the Azulgrana's expectations of a smooth playing surface at opposition grounds, stating that: "When you invite me to your house, I use your tablecloth, your dishes and your glasses."

However, Valverde was unflustered when it was his turn to talk ahead of the game.

"We will adapt to the menu, to the dishes, to everything," Valverde rebutted during Friday's press conference.

With this trip being Barcelona's first to the Estadio Wanda Metropolitano, the 53-year-old is relishing the challenge and hostile atmosphere that awaits his side, although football must take centre stage in his opinion.

"Anybody who wants to put the bandage on before the injury can do so, but we are going to a stadium with a spectacular atmosphere, where we have not yet played and, let's face it, there will be two teams who both want to win LaLiga," he noted.

"It will be a tough environment, but this is a football match, nothing more.

"We're here for people to go and enjoy themselves, to suffer with their football team and nothing else. This is a show and we want people to enjoy it."

The fitness of Luis Suarez has been much discussed over the international break and Valverde moved to suggest that the Uruguayan is over his injury doubts after a brace for his country during the week.

"It is true that he had a problem during pre-season, in the Supercopa de Espana, and he has been coping well, but now he is in perfect condition," said Valverde.

"He comes to this game after scoring two goals, and we have given him some rest. We have him available and we don't think he's going to have to stop playing."

Lionel Messi is another who claimed many plaudits as he rescued Argentina's World Cup campaign, and Valverde stated his pleasure at the striker missing the long haul play-off that potentially awaited the South Americans.

"If there are any [critics], they will be very few," added the coach. "What he did the other day, he does on a permanent basis for Barcelona.

"I want all my players to go to the World Cup and, of course, I was worried about the play-offs and that they would have to go to New Zealand. It could have meant us losing [Javier] Mascherano and Messi for the Sevilla game.

"Many of these internationals have to play decisive matches. From that point of view, the level of fatigue they accumulate is important.

"But Atletico Madrid also have this problem. If it was a game without as many incentives as this, I would worry more, but here we are all aware of Atletico's power.

"That helps us to be fully focused. I hope we give them a good game."

Zidane: Coaching Barcelona? I have a white heart

As Zinedine Zidane prepares to set up his side without the crocked Gareth Bale, he admitted he had no answer as to why the Welshman has been so unlucky with injury.

Following an impressive performance recently in the Champions League against Borussia Dortmund, his progress has been halted after sustaining another knock.

Zidane insisted that the forward will not be rushed back from injury and isn't too worried yet about the persistent fitness problems the player is suffering from, while also brushing off suggestions that he should have been sold in the summer.

"He is okay and is doing better every day," he said to reporters at his pre-match press conference.

"He was very good in Dortmund but felt some pain in his calf and that worsened after he met up with Wales for international duty.

"I can't say if he will be back in a week or 10 days, we just have to wait and see, but he is determined to return as soon as possible and that's good.

"Now we have to be calm and exercise patience with him. I don't know why he has been injured so much because I'm neither a doctor nor a physio.

"I have confidence in the people who work here but I can't do anything about it. Bale is the man who is most disappointed because he wants to be out there playing.

"I don't think about anything like whether or not he should have been sold, you have to live in the present."

On Saturday, the Frenchman celebrates his 100th game in the Real dugout and revealed what his happiest moment so far has been as well as pondering what he has learned during his time in charge.

"I think the biggest thing I've learned is that you must take advantage of things and you must do that by working hard every single day you are here," he added.

"The most beautiful moment for me so far here has been winning LaLiga.

"You fight for that every day, it is a tremendously difficult thing to do and winning it is the ultimate feeling."

Asked if he ever regretted not coaching Barcelona or any other side, Zidane's response was unequivocal.

"I'm here now, I only think about what I'm doing now, and playing was the same."

Atletico Madrid take on Barcelona in the game of the weekend, but the Frenchman isn't interested in the goings on elsewhere.

"I want to win our game," he explained.

"I don't want any result in particular, I just want to win."

Pochettino: Guardiola was part of the big success at Barcelona and I never said it was the Messi team

Tottenham Hotspur boss Mauricio Pochettino is unimpressed by Pep Guardiola's suggestion that Spurs are over-reliant on Harry Kane, saying he was never disrespectful to the Manchester City manager by calling Barcelona a "Lionel Messi team" when he was in Spain.

Guardiola referred to Tottenham as the "Harry Kane team" when assessing City's title rivals in the wake of his side's victory over Chelsea before the recent international break.

Pochettino, who has played for and later managed Barcelona's city rivals Espanyol, said on Friday that Guardiola struggles to "be a gentleman" after a victory.

"What he said was disrespectful to many," the Argentine told a news conference. "It did not affect me but was very disrespectful for many people.

"He was part of the big success at Barcelona with Messi at his best and I never said it was 'the Lionel Messi team."

Pochettino, whose team are third in the table and take on Bournemouth at Wembley on Saturday, said Guardiola had not yet apologised.

"Maybe after the press conference he calls me. I am sure I will reply... I know Pep and when he is excited after an amazing win, he struggles to keep his position and be a gentleman."

Manchester United will feed off the atmosphere inside Anfield when they visit Liverpool on Saturday and the hostile reception they receive from the home fans will only serve as extra motivation, manager Jose Mourinho has said.

United have made a strong start to the Premier League season and are second in the table behind Manchester City on goal difference, but face a tough test at the home of their bitter rivals.

Mourinho knows his team cannot expect a warm welcome but is confident they will be equal to the occasion.

"This is quite funny for me because when people speak about big atmospheres it looks like we don't like them," the Portuguese told a news conference on Friday.

"It looks like it is a big problem for us to go to a certain place and to face a big atmosphere. This is what we want. I am surprised that you speak about that in a negative way.

"I'm even more surprised when I see former big players speaking about atmospheres like something sinister that worries us. It motivates us.

The manager used Barcelona's La Liga match against Las Palmas on Oct. 1 as an example. Barcelona played the game behind closed doors following clashes between police and voters in Catalonia over a disputed independence referendum.

"When Barcelona played against Las Palmas in an empty stadium, do you think the players were happy with that?" Mourinho asked. "Do you think the Las Palmas players wouldn't prefer to play in a Nou Camp that is full with a great atmosphere?

"We go to play against a big team with a big tradition, in an amazing stadium. We know the fans have huge animosity against Manchester United historically but this is what we want.

"So we are very happy in our careers to have one more opportunity to play in these beautiful conditions. It is beautiful to play at Anfield. Beautiful."

United are unbeaten so far this season with six wins and one draw, while Juergen Klopp's Liverpool are seventh with three wins, three draws and one defeat, and Mourinho said both teams were evenly matched.