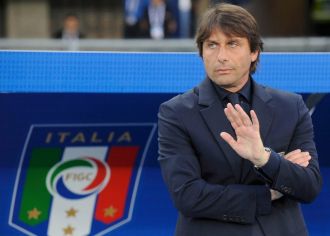 Antonio Conte back as national boss

ITALIAN chiefs are plotting to lure Antonio Conte back as national boss.

Conte quit after Euro 2016 to take over at Chelsea and is nearly midway through a three-year deal.

Italian Antonio Conte is only in his second season as Chelsea boss, winning the Premier League title in his first term

But Italy’s faltering qualification for next summer’s World Cup has prompted senior figures within their FA to launch a lobbying campaign to get him to return.

Current boss Gian Piero Ventura is under huge pressure having only managed to clinch second place in Group G behind Spain.

And the Azzurri face the lottery of a play-off next month to decide their ultimate fate.

The four-time world champs were humbled 3-0 by Spain and  only managed a 1-1 home draw with Macedonia in Turin on Friday.

Last night they finished their campaign with an uninspiring 1-0 win in Albania.

Ventura is under contract until 2020, but a poor showing in Russia next summer could bring a premature end to his tenure.

Rumours of splits in the camp have dogged the Italy camp with keeper Gianluigi Buffon forced to deny a series of rifts.

The dressing room was fiercely united under Conte when they only went out on penalties to Germany in the last eight of Euro 2016.

Chelsea are eager to keep Conte and rewarded him with a double-your-money pay rise to around £10million a year for the remaining two seasons of his current contract.

But Conte, 48, saida fortnight ago: “I have nostalgia for Italy. Once I have had some more nice experiences I will return to Italy, for sure. I don’t know when, but the goal is to do that.”

Nasri: It is stupid to not use Benzema

It has been one of the more controversial decisions of Didier Deschamps' spell as France coach, yet Karim Benzema continues to be frozen out of the international setup, a decision that Samir Nasri has labelled as stupid.

The former Manchester City midfielder has also been out of favour with the former Monaco coach since 2013 and he hasn't been shy in making public his criticism of the experienced coach.

"I feel sorry for Karim because he really wants to come back," he explained.

"It has been nine or 10 years that he has been starring in Madrid, there is a moment when you must recognise someone's talent.

"It is stupid to not use a player like Benzema, you could have an attack with Karim, Mbappe, Griezmann and Dembele, it would be fantastic."

France have a fantastic collection of attacking footballers at this present, yet following a narrow 1-0 victory over Bulgaria on Saturday, there have been calls for further reinforcements.

Isco and De Gea debut as candidates for the Ballon d'Or

Three Spaniards have been included in the 30-man shortlist for the 2017 Ballon d'Or, with Isco and David De Gea making their first ever appearance.

Whilst it is now customary for Real Madrid's Sergio Ramos to be nominated for this kind of award, it is not such a familiar feeling for his club teammate and the Manchester United goalkeeper.

Since 2000, when Raul Gonzalez and Gaizka Mendieta were put forward for the prestigious award, Spain has boasted twenty-four candidates for the prize given to the world's best player in the calendar year.

This time around, the Spanish are, as ever, well represented with only France enjoying more nominees (four in total) - Karima Benzema, Antoine Griezmann, N'Golo Kante and Kylian Mbappe.

When we look at the leaderboard for Spanish nominations over the years, the clear leader is Andres Iniesta with eight, although he does not feature for the first time since 2008.

After the midfielder come his ex-Barcelona teammate Xavi Hernandez and Real Madrid legend Iker Casillas with seven votes, while Cesc Fabregas and David Villa are not far behind having been shortlisted six times.

Wenger: I hope Barcelona continue to play in Spain

Arsenal coach Arsene Wenger is not entirely open to the idea of Barcelona being invited to play in the Premier League and is hopeful that the Catalans will continue to play in LaLiga.

There remains some doubt about the future of the club following Catalonia's referendum for independence, and the European giants might be forced to play elsewhere.

"I hope that Barcelona will continue to play in Spain," Wenger told beIN Sports.

"To play in England would go against geographic unity and common sense.

"Why not invite Celtic and Ranger to the Premier League? They are already in the UK and it would make a lot more sense than inviting Barcelona."

Wenger went further and said that inviting the Catalans to play in England's top flight would look like an act of support for Catalonia.

"It would mean support for Catalonia," he added.

"That would not be seen positively internationally."

Javier Tebas said on Friday that he does see the possibility of LaLiga continuing without Barcelona and Espanyol, while conceding that their losses would be costly and sorely felt by the league.

Brazilian fans call for Canarinha to roll over against Chile

As Brazilan fans chuckle at Argentina's misfortune, a campaign is underway for the national side to let Chile win to ensure the Albiceleste miss out on Russia.

There are few, if any, fiercer rivalries in world football than Brazil and Argentina and fans of the five-times world champions are thoroughly enjoying the qualification struggles of Jorge Sampaoli’s side for Russia 2018.

Brazil have Argentina’s fate partially in their hands going into the final round of games in Conmebol qualifying and a campaign has been launched on social media for Tite’s side, who are already through, to hand Chile victory in São Paulo to ensure that Argentina miss out, with the Albiceleste travelling to Ecuador in their final game.

Sampaoli’s side need to win in Quito to reach the finals in Russia but also require Brazil to defeat Chile to avoid finishing fifth and facing an inter-confederation playoff against New Zealand. That has led to Brazilian fans launching a campaign with the hashtags #EntregaBrasil and #EntregaProChile (entregar in Portuguese means to lose on purpose), calling on Tite’s men to allow Chile to win.

The antagonism between the two nations runs deep and both are always quick to jump on disasters affecting the other; Brazilian fans have not swiftly forgotten the mirth generated in Argentina when they were mauled 7-1 by Germany at the last World Cup on home soil and few would have imagined that redress would be a possibility as early as qualifying for the next tournament.

Heynckes: "Real Madrid is the model Bayern should follow"

The coach, who was officially presented by Bayern Munich on Monday, decalred his admiration for Real Madrid, citing Zidane's team as the one to follow.

Jupp Heynckes is now fully on board at Bayern Munich. The German coach, accompanied by Karl-Heinz Rummenigge and Uli Hoeness, was officially presented by the Bavarian club this morning. Heynckes told reporters that his priority is to extract the very best out of all of his players and return Bayern back to where they belong.

"I want to build a team in which the players work for each other and are focused on the success of the team. I have a very clear plan about how we are going to go about it. In spite of the current situation, I'm convinced that the team is going to show a very difference side to the one it has shown in the last few outings. Players like Müller aren't playing to their full potential. This team has class and needs to show it. We need to show out on the pitch that we are a team", Heynckes explained in today's press conference.

The coach, who has been out of management since he left the Bayern post four years ago, and winning the treble, said that his return to coaching is a temporary venture and only came to fruition for Bayern's enthusiasm for him to take the reins once more. "I had offers from some of Europe over the past few years but I decided not to return to coaching. This isn't my return. I have a date when my work will be complete. I'm very grateful to Bayern, they kickstarted my career as a coach. And that was one of the motives which convinced me to give it one last shot", he continued.

Heynckes also had a few words top say about the man he is replacing: "Ancelotti is a great coach and a gentleman. He was widely admired for the work he did at Real Madrid", before adding: "I have been following international football over the last few years and I have been really impressed by Real Madrid. That is the model to follow".

The 72-year-old ended his press conference, attending the Spanish-speaking journalists who were keen to hear his thoughts on Arturo Vidal and James Rodríguez. "I have pretty clear idea about both of them. I know Arturo Vidal from Leverkusen, where I coached him for two seasons. I've watched James in many games and I know him too, although not personally. When they return from international duty, I'll speak to them and give them what advice I can. James doesn't speak German and the football here is very different to the style played in South America. It's a different language, a different mentality and another culture. It's very difficult for a young player but he has to know that he's here to help me, because I like players with talent - and he has a lot".