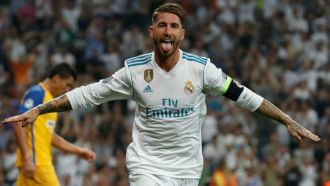 His 2015 renewal may have been an arduous and public process, but Sergio Ramos' latest contract extension has been a lot simpler and he has actually already signed it.

The agreement between the player and Real Madrid came during last season and the signing was done in private, without alerting anybody.

Both the central defender and Florentino Perez understand each other well and both felt as though there was no need to make a public presentation of the new agreement, which will extend Ramos' stay at the Estadio Santiago Bernabeu through to June of 2021.

His close relationship with both the president and Zinedine Zidane has allowed the former Sevilla defender to take on a vital position at Los Blancos and, should he reach the expected end of his new contract, it will mark 16 years with the Spanish champions.

He arrived as a teenager and is now the captain, leading by example.

This extension will take Ramos into the category of Real Madrid's highest-paid players, as he is alongside Cristiano Ronaldo and Gareth Bale in this regard.

A short announcement of the extension is expected in the coming days.

Harry Kane and Dele Alli are on Real Madrid's radar

Having failed to land Kylian Mbappe during last summer's transfer window, Real Madrid are aware that they should sign a superstar next year and two of the names on their list of potential Galactico signings are Tottenham's Harry Kane and Del Alli.

Given their obvious talent and their youth - Kane is 24 and Alli is 21 - they would both fit the bill and Los Blancos will enjoy a close-up when they take on Tottenham in the Champions League later this month.

They'll come up against a striker who has scored 14 goals in 10 matches this season and an attacking midfielder who has been instrumental in manufacturing chances for the centre-forward.

Of course, it won't be easy for Real Madrid to sign either player if they do decide to pull the trigger.

Tottenham have been able to resist an attempt from Manchester United to sign Kane, offering him 500,000 euros per month and convincing him to stay by reminding him of the new luxury stadium Spurs will soon be playing in.

Isco: The whistling of Pique? That's what he opens himself up to

Every time Gerard Pique touched the ball during Spain's Friday night match in Alicante, the Barcelona defender was whistled by the home crowd, something which Isco had his say on after the match.

The Real Madrid player explained that Pique is unfazed by the reaction of the crowd and that he understands he risks being jeered.

"That's what he opens himself up to," Isco said on the matter.

"We know that on the pitch he is very important for us.

"He has been with the Spanish national teams for 15 years and has shown his commitment.

"People are free to whistle him and to think whatever and he takes it naturally."

Speaking more generally about the current political climate in the Iberian Peninsula, Isco said that he tries not to bring politics into sport.

"It's complicated to mix politics with football and what Spain is going through is a shame," he said.

As for his thoughts on the 3-0 win over Albania, he pointed out that qualifying for next summer's tournament was the main mission, one which has now been accomplished.

"The important thing for us was to qualify, which he have done," the Andalusian said.

"So now we can set a new objective."

Given that Italy failed to defeat Macedonia on Friday, Spain's passage to the finals was confirmed.

Several years of difficult transfer windows for Barcelona have come at a cost as it brought an end to Raul Sanllehi's time at the club.

Until now, Sanllehi had been the director of football and in charge of negotiations when it came to signing new players.

Club president Josep Maria Bartomeu will present a new sporting structure in the next general assembly, which will see the role of negotiator with other clubs and the likes of UEFA and FIFA be absolved into another position.

In the new set-up, Pep Segura will continue as general manager, Robert Fernandez will stay on as technical secretary and both Jordi Mestre and Albert Soler are expected to remain as vice-president and sporting director, respectively.

After 15 years of service in various roles, Sanllehi has decided to leave the club of his own volition having seen that he would not fit into the new system.

The Catalan wanted to make sure that his departure was on friendly terms before the January transfer window.

Sanllehi was understood to be upset and frustrated this summer, particularly the departure of Neymar. It was Sanllehi who had saw through the tough negotiations with Santos to sign the winger in 2013 and he had enjoyed a good relationship with the Brazilian until the second offer from Paris Saint-Germain.

It was in fact Sanllehi who convinced Neymar to turn down the offer from Paris the first time, in 2016, but he could not convince the forward to stay this summer.

He held various talks with both the player and his father during the club's tour of the United States, but was unable to change Neymar's mind.

The loyal club servant was also left humiliated by the decision of the club's coaches to pull out of a deal for Jean-Michael Seri when he was already in Nice to negotiate a deal.

Multilingual and low-profile, he began life at the club as manager of FCBMerchandising in 2002 just a year before the arrival of Joan Laporta as president. His work there impressed club bosses and caught the eye.

In 2008, he moved on to become director of football, a role that he continued to hold after the election of Sandro Rosell.

With such rich pedigree, it seems unlikely that Sanllehi will have to wait long for offers of employment from other clubs.

The recent hiring of Jupp Heynckes as Bayern Munich's new coach after Carlo Ancelotti's sacking brings to mind the name of another tactician who had a similar affinity with one club.

That man is the Spanish football legend that is Luis Aragones.

German coach Heynckes is now in his fourth spell at the helm of the Bavarian outfit, an unusual statistic to have to your name at any level and it is one shared with the former Atletico Madrid coach.

Although he has presided over more games in LaLiga than anyone else and led Spain to Euro 2008 glory, Aragones is most remembered for his time(s) with the Rojiblancos.

Like Heynckes, he took charge of the same team on four occasions. First joining after losing the 1974 European Cup final to Bayern as a player, the Spaniard then enjoyed his longest spell on the bench, remaining for six years.

He returned in 1982, this time staying for five years before making a comeback in the 1990s with a two-season spell in charge and it was another eight years before he came back for the final time.

On that occasion, Aragones was answering the club's SOS to bring them back to the top-flight and he did just that, with that achievement being listed along with his three Copa del Rey wins, a LaLiga title and Supercopa de Espana across his four spells with the club.

Unlike European football, it is rather more common in South America for a coach to enjoy a quartet of spells with one club.

That was the case for Julio Cesar Uribe with Tecos UAG in Mexico, Hector Veira with San Lorenzo, Luis Fernando Tena at Cruz Azul and Juan Carlos Lorenzo with San Lorenzo.