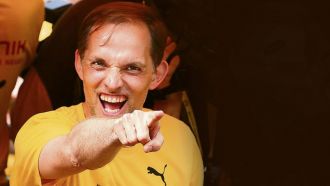 Candidates continue to be circulated for the vacant coach role at Bayern Munich since the departure of Carlo Ancelotti and Pep Guardiola lunched with Bayern Munich president Uli Hoeness and discussed the possibility of Luis Enrique, according to media reports.

The former Barcelona coach will meet with representatives from Bayern on Wednesday to discuss the role said Sport1, and it appears as though the Spaniard has become the number one target.

City coach Guardiola is enjoying his holiday in Germany having gone to the Oktoberfest along with former-Schalke coach Markus Weinzierl and Leipzig coach Ralph Hasenhuttl but the Catalan was not only in Munich to speak to fellow trainers.

There are also reports that Guardiola is also being asked over Tuchel for the vacancy.

The Portuguese striker is the latest sportsperson to write for 'The Players Tribune'. In his letter he reveals his motivation and also an insight into his youth.

Cristiano Ronaldo is the latest high profile sportsperson to write for The Players Tribune. A recently launched online platform that provides content written by professional athletes. The website was launched by former baseball player Derek Jeter and despite having a heavy US sport presence has seen the likes of Francesco Totti, Ivan Rakitic and Claudio Ranieri pen recent articles.

Cristiano Ronaldo is the latest player to pen an open letter where he reflects on growing up  on the island of Madeira through to the emotion of sharing the recent Champions League triumph with his son Cristiano Jr. on the Millennium Stadium pitch in Cardiff last June.

The Real Madrid striker confesses in "My Story" that moving to the Portuguese capital to join the Sporting Clube de Portugal youth academy was one of the loneliest times in his life as he immersed himself in training sessions with the desire to improve his strength and become fitter. He reminisces that it was at Sporting that he first felt the hunger to win stating: "I don’t know where this feeling came from. It was just inside of me. It’s like a hunger that never goes away. When you lose, it’s like you’re starving. When you win, it’s still like you’re starving, but you ate a little crumb. This is the only way I can explain it."

The letter concludes reflecting on his current Real Madrid career and despite over 400 games with the Spanish side, that hunger to keep winning more and more has never left him: "After 400 matches with Madrid, winning is still my ultimate ambition. I think I was born like that. But the feeling after I win has definitely changed. This is a new chapter in my life. I had a special message engraved on my new Mercurial boots. It’s right on the heel, and the words are the last thing that I read before I lace them up and go to the tunnel."

It is like a final reminder … a final motivation. It says, “El sueño del niño.” (A child's dream)

Neymar and Messi battle it out amongst top dribblers in Europe

Friends at Barcelona and now playing for different clubs, Neymar and Messi are battling it out for who is the best dribbler in Europe. Which player beats more than any other among the five top European leagues?

Neymar is the player that tries the most and he done 72 dribbles in Ligue 1 where he has beaten a player in 46 of them and so is the the kind in Europe. He has been fouled 30 times, the most along with Bordeaux's Malcom. He has six goals and five assists in the French championship along with his dribbling skills and he has a 64% success rate in beating a player.

Messi is not far behind as he has 11 goals and two assists at Barcelona while he has been successful from 42 of 68 dribbles which is a rate of 62%.

The player with the best percentage success rate from dribbles though is Lyon's Nabil Fekir who has six goals and three assists along with 35 successful dribbles from 50 that gives him a 70% rate.

Cristiano Ronaldo is experiencing a frustrating start in La Liga and Karim Benzema's absence could be the reason for his lack of goals.

In addition to the fact he has not scored so far in LaLiga, he also does not seem comfortable on the field and there is a theory that he is missing Benzema's presence.

Without the Frenchman, Cristiano has been forced to take up the number nine role, a position in which he feels isolated and is not at ease. This has resulted in him being surrounded by more defenders and less effective.

While he has scored four goals in Real Madrid's last two Champions League matches when Benzema also was not present, Ronaldo generally has benefitted a lot from being alongside Benzema and they have had a lot of success together.

However, Cristiano and Benzema have yet to play together this season. The Portuguese's five-match ban and the injury to the Frenchman have stopped the two from linking-up on the pitch. Benzema has missed six games so far and it has taken a toll on the four-time Ballon d'Or winner.

The lack of Karim's natural ability on the field to play in the centre and distribute the game is giving Cristiano a hard time.

"He likes to start from the side and surprise," it has been often said which has not been possible recently.

Gareth Bale ruled out for a month

As has been the patter of Gareth Bale's recent months with Real Madrid, a fantastic individual performance against Borussia Dortmund has been followed by a calf injury, one which will see him miss a month of action.

The injury is in an area that has been problematic since he arrived at the Estadio Santiago Bernabeu.

Zinedine Zidane didn't expect the former Tottenham Hotspur forward to play for his national team, yet this is a different ailment to what forced him to limp off at Signal Iduna Park.

In a contactless training session on Monday, the 28-year-old felt discomfort in the back of his left thigh, a tingling sensation that spread throughout his entire leg.

The conclusion was that he had suffered an entirely new injury, one which has forced him out of Chris Coleman's Wales setup ahead of matches with Georgia and the Republic of Ireland.

Busquets: I think that I will continue to play for many more years with the national team

Barcelona midfielder Sergio Busquets hopes to have a long international career ahead with a landmark 100th cap in sight for Spain when they face Israel.

Meanwhile, he admitted that it will not be easy to sort out the Gerard Pique controversy that has engulfed the Spain national squad.

Busquets was speaking ahead of the Israel game and he talked about the strained atmosphere at the Las Rozas training facilities in Madrid.

"I think that I will continue to play for many more years with the national team," he said.

"I would say this is my most difficult spell in the national team due to everything that is happening and I think it will be difficult to sort out the Pique situation."

Busquets denied that there had been a special meeting held to discuss the case.

"There has been no meeting in particular to deal with the Pique situation. I do not know if Ramos and Pique have spoken but it is not a usual situation," he explained.

"As for Pique he seems the same as ever."

Busquets also refused to take sides in the case and praised Ramos.

"Ramos is important in every way. In a sporting sense, as a captain he is an example and he is always there for when you need him," he confirmed.

Looking at his career with the national team as a whole he added: "If I had to pick two players in particular then I would say Xavi and Iniesta."

Real Madrid midfielder Toni Kroos said he made the right move for his career by joining the Spanish club from Bayern Munich in 2014.

He has become a key player at Real and won plenty of silverware including three Champions Leagues in four seasons.

"My change of team was correct, in fact, from my point of view there is no doubt about it," Kroos revealed.

"Clearly, if you go abroad to a top club, it means one more step in your development.

"Carlo Ancelotti wanted me in Madrid, and had bet on me."

Kroos has also opened up on his move to the Spanish capital and the differences between the two sides.

"Before leaving I was seen as a good player, perhaps as a very good player, but as one of the many players that Bayern had," he reflected.

"But if you play as a Real footballer you get even more attention.

"Maybe that part from the fans I do not like so much."

The German player starts almost every Real Madrid game and has thanked his French coach for believing in him.

"From the beginning, he gave me a lot of confidence, and in his two years [with Real Madrid] he's played me in almost every game, especially in the big games," he indicated.

"Trust me, I will always try to give everything for the team. We have a good relationship.

"A friendly relationship with the coach is important for each player. "

Bayern Munich midfielder Franck Ribery paid 40,000 behind his brother Steeven's back so that he could play for French second-division club Aviron Bayonnais.

After Ribery's younger sibling was left without a team due to the bankruptcy of his previous club, the France international decided to step in and help out.

In the book written by agent Christophe Hutteau, the story of the footballer's generous donation to his younger brother is told.

"I'm in the sh** with my brother," he commented, asking his representatives to help him find a club.

This resulted in Hutteau getting in contact with Aviron Bayonnais.

However, Steevens barely played three games with the team due to an injury and was unaware Ribery was the one who paid for his contract with Bayonnais.