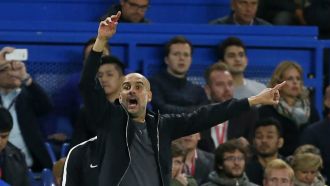 Guardiola: They think we dislike Spain, an incredible country

The holding of a referendum on Catalan independence has sparked a tense situation in the region, one which former Barcelona coach Pep Guardiola has had a say on.

Guardiola was one of those who announced that a vote would be held and he tried to make clear the attitude of the Catalan people.

"We don't want them to think that we dislike Spain," he said in interviews with Catalunya Radio and RAC1.

"Spain is an incredible country, with its literature, sport and cities.

"But there is a need to understand that there is a population which wishes to decide its own future."

As for the violence witnessed in and around polling stations, the Manchester City coach was angry that the facts might not all come out.

"Spain will try to cover up the reality, but the rest of the world's media will show it," he said.

"I read in El Pais that they were saying it was the police officers who were injured.

"Injured by what? By votes?

"It has been the opposite as they have injured people with rubber bullets, which are illegal in Catalonia.

"They broke one woman's fingers.

"There are some images from today that are irrefutable.

"Why don't we be more like the British, who have been democratic for many more centuries than us?

"On top of it all, we don't even know if Catalonia does or does not want to be independent."

One of the big stories of the day was the fact that Barcelona's match against Las Palmas went ahead, albeit behind closed doors, and Guardiola was asked about it too.

"I would not have played the match," he said.

"And if we did have to play it, then not behind closed doors."

Ultimately, it did go ahead and Guardiola's former team won 3-0.

Real Madrid managed to end their poor recent run at the Estadio Santiago Bernabeu with an Isco-inspired 2-0 victory over Espanyol and Zinedine Zidane lauded the playmaker, suggesting the Spaniard plays football like he would if he was playing on the street.

At a time when Los Blancos' forward line has been decimated by both injury and poor form, Isco's brace was appreciated by supporters and coach alike.

"He [Isco] knows that he is an important player for us," Zidane explained in his post-match press conference.

"He plays football as if he was playing on the street, I like that.

"He doesn't worry if something doesn't work, as he has patience and just tries again."

It was by no means an easy victory for the defending Spanish champions, though, and Zidane was frustrated by his team's lethargy in the second half.

It almost cost them their lead, with Nacho Fernandez being forced into a goal-saving stop.

"In the second half, I think we were a bit tired, although this is normal after seven games," he said.

"We've come down a level physically and the worst part of it is that a lot of my players are not going to rest, as they are going to play World Cup qualifiers."

The Welshman isn't injured per se, but he has a fitness concern that is preventing him from being selected domestically, although Zidane was quick to reassure supporters.

"Nothing has happened," he stressed.

"He [Bale] has played a lot of football since the start of the season and, after his effort at Borussia Dortmund, he was a little overloaded.

Los Blancos' poor home form has been one of the surprises of the LaLiga campaign so far and it has left everyone bemused, especially with the team creating a plethora of chances in every match.

The former Juventus midfielder intimated that the issues were more to do with the style of Real Madrid's opponents, with Espanyol making it difficult for the hosts.

"We like it when teams are more open against us because we find more space," he explained.

"We got the win today, but we are forced to play against the opponent that we are given."

Debuts for Castilla graduates are always a special occasion, with the Estadio Santiago Bernabeu crowd eager to see the next generation of homegrown talent coming through.

Sunday evening saw Achraf Hakimi become the latest in a long-string of such debutants and the full-back did not disappoint, as he was a constant threat in attack with his energetic style of play.

This performance didn't go unnoticed by the 45-year-old coach, who confirmed that the Moroccan had done well.

"It was an opportunity for him," Zidane said.

"He is part of the squad and he wants to show that he can play regularly with us.

"He has done well and this first match has shown that I can count on him."

Zidane can now enjoy a short rest, with international football on the schedule next weekend.

For the first time in his Real Madrid career, Cristiano Ronaldo has failed to find the back of the net in his opening three matches of the LaLiga season.

The Portuguese forward missed Los Blancos' opening four league matches due to suspension, but has been kept out by Real Betis, Alaves and Espanyol since his return.

Until now, the longest it had taken him to get his first LaLiga goal of the year was the 255 minutes of the 2010/11 campaign.

It was very different last season, given that the No.7 got his name on the scoresheet just six minutes into his LaLiga campaign.

Minutes it took Ronaldo to score in LaLiga

Arsene Wenger lamented on Sunday that Arsenal's recent upturn in form will be interrupted by next week's international break.

The Gunners have amassed 10 points out of a possible 12 in the Premier League and won both of their Europa League group games since the previous round of World Cup qualifiers, which had been preceded by back-to-back defeats by Stoke City and Liverpool.

Arsenal now have to wait until Oct. 14 for their next match, away to Watford in the Premier League.

"I would have loved to be able to continue to play, but we cannot do anything about that," Wenger said after his side's 2-0 league win over Brighton & Hove Albion.

"Our last international break was a nightmare, but this is one is a bit better.

"Let's hope the players come back in a good shape. I knew that after the game at Liverpool, everybody did write us off. It just depends on us how much we respond."

Pressure on Wenger had intensified in the wake of those early defeats, but the Frenchman insisted the results had not made him panic.

"We responded in a united way and we put some wins together and some good performances as well."

Arsenal's win over Brighton, sealed by goals from Nacho Monreal and Alex Iwobi, came on the 21st anniversary of Wenger taking charge of the club.

"In this job you only look for the next game," the 67-year-old said. "When you look back, you see the distance you have made. Overall, football changed a lot in this 21 years".

uergen Klopp bemoaned Liverpool's finishing after his side were held to a 1-1 draw at Newcastle United in the Premier League on Sunday.

Philippe Coutinho fired the visitors ahead with a superb 29th-minute strike, but poor defending and a lucky ricochet allowed Joselu to equalise seven minutes later.

Liverpool were unable to find a winner, despite dominating possession and creating 17 chances to Newcastle's eight.

"I am disappointed, frustrated, whatever you want. We scored a wonderful goal and created wonderful chances," Klopp told the BBC.

"We shot the ball over the goal even when it was empty. We created five or six outstanding, big chances. Usually we score with one of them. I didn't see one more chances for Newcastle.

"If you don't help yourself, no one else help you. It will be like this until we score. We play like this it makes sense that we play like this usually we score in situations like this. We have to accept this and carry on."

Liverpool have now won just once in their past seven matches in all competitions and sit seventh in the Premier League, seven points adrift of leaders Manchester City.

Newcastle are ninth in the table, with 10 points from seven matches in their first season back in the top flight.

"When you get just one point at home we cannot be happy, but against a top six (team) like Liverpool, creating so many chances, you have to be a little bit happy," manager Rafa Benitez said.

"If you see the points and see we are a promoted team, then we are pleased, but against Huddersfield (lost 1-0) and Brighton (lost 1-0) we could have done something more. We have what we have. We are happy with that."