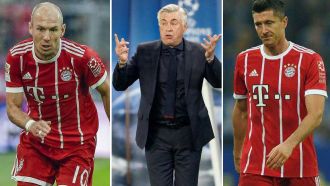 Hoeness: "Ancelotti had five players against him"

Bayern Munich president Uli Hoeness has spoken out about the controversial decision to sack coach Carlo Ancelotti. The 58-year-old was relieved of his duties after Bayern fell to a 3-0 defeat at the hands of PSG in the Champions League.

Speaking to 'Sport1', Hoeness revealed that "Ancelotti had five players against him".

Karl-Heinz Rummenigge, another important figure at the Bavarian club, also spoke about the departure of the former-Real Madrid coach.

"Since the start of the season, the performance of the team has not met our expectations, and the match in Paris has shown clearly that we had to make conclusions," Rummenigge stated.

He added, "Carlos is my friend and that will continue, but we had to take a professional decision for FC Bayern."

Ancelotti took risks with what has turned out to be his final team selection as the manager of the Bundesliga champions. He left Franck Ribery, Arjen Robben, Mats Hummels, and Jerome Boateng out of the starting line-up for the defeat at Parc des Princes, yet insisted after the match that "I don't regret anything." Perhaps that was the statement that sealed his fate.

The reins will now pass in to the hands of Willy Sagnol. The former-Bayern player faces a tough challenge ahead, starting with a league match against Hertha Berlin on Sunday.

Carlo Ancelotti always faced a tough task at Bayern Munich as he arrived at the club in the shadow of Pep Guardiola who inherited a team that had won the treble and it was his task to put his stamp on it.

The plan did not go wrong necessarily as they won three leagues, two cups, a European Super Cup and a World Club Cup but not enough with the Champions League a notable absentee from the list.

Three eliminations at the hands of Atletico Madrid, Barcelona and Real Madird put the Guardiola project in doubt.

Bayern turned their attention to Ancelotti following Guardiola's departure as they saw him capable of making a smooth transition that involved not the destruction of the 'tiki-taka' but adapting it to a more direct approach when necessary.

Ancelotti's reputation as a coach who keeps his players happy was also valued as they had a dressing room but even he had trouble with characters like Ribery and Muller, while not mentioning former players that exerted a lot of influence like Matthaus and Effenberg.

"Carlos is in favour of freedom of speech and democracy but we are not being very intelligent if instead of focusing on the pitch we talk about him off it," said Rummenige.

As with Guardiola, the choice of Ancelotti has not worked out as a complete success despite winning the league and two domestic Super Cups, as again the club were looking for and the writing was on the wall with the criticism he received last season after losing to Rostov in the Champions League.

Ancelotti ignored the criticism and concentrated on avoiding injuries with his target of getting to the knock-out stage of the Champions League in good shape but they ended up getting knocked out in the quarter-finals by Real Madrid.

Guardiola failed in that he could not deliver the Champions League and Ancelotti also failed to deliver that and also his football was a disappointment as he did not make them notably more direct with a defined style of play.

The heavy 3-0 loss against Paris Saint-Germain was the final straw on the back of their worst start to a Bundesliga season since 2010-11 with just 13 points from 18 games. Ancelotti is the first coach that Bayern have sacked before December since Heynckes in 1991.

His record is not bad with 42 wins, 9 draws, 9 defeats, 156 goals for, 50 against and Ancelotti is not to blame, or at least he is not the most at fault as their work in the transfer market has left a lot to be desired with fresh talent not coming in. They also had a poor preseason planned and overall it is fair to say that Bayern aren't what they were.

Pochettino: I never said Kane is better than Cristiano Ronaldo and Messi

Tottenham Hotspur striker Harry Kane is one of the best in the world but the 24-year-old can still improve further, manager Mauricio Pochettino said ahead of Saturday's trip to Huddersfield Town in the Premier League.

After a goalscoring drought in August, Kane has scored nine goals in five games in September, with a brace in each of Tottenham's two away league victories and their Champions League opener against Borussia Dortmund.

Kane notched his first hat-trick in the Champions League during Tuesday's 3-0 victory over APOEL Nicosia and his exploits earned praise from Pochettino, who believes the England international can elevate his game further.

"He is one of the best strikers in the world and because he's still so young, he can improve," the Argentine told reporters on Thursday. "His potential, his professionalism; he has a gap to improve a lot."

Pochettino also said that Kane should not be compared to Real Madrid forward Cristiano Ronaldo and Barcelona's Lionel Messi as the England international was a completely different player.

"I never said he is better than Cristiano and Lionel Messi, who are at a different level. They are the best and are showing that for the last five to 10 years," he added.

"We cannot put so much pressure on Harry because he is so young... Harry is a striker, a killer; they are killers too but play in different positions and have different styles. It will not help Harry if we start comparing him to these players."

Tottenham playmaker Christian Eriksen, who missed Tuesday's win over APOEL through illness, has returned to training while defender Serge Aurier will miss the match through suspension.

Midfielders Mousa Dembele, Victor Wanyama and Erik Lamela along with left back Danny Rose are ruled out through injury.

Pochettino is expecting a tough encounter against Premier League newcomers Huddersfield, who have kept four clean sheets in their opening six league games.

"A big challenge. I think they will be very motivated to play against us and have had the whole week to prepare for the game against Tottenham," he said.

"But of course I know we will arrive in our best condition and ready to compete. That is most important."

Florentino Perez: The federation needs to change and modernise

The Spanish Football Federation needs to change and modernise, according to Real Madrid president Florentino Perez, with the club unhappy at the quality of refereeing

One of the burning issues of football in Spain at the moment is how the governing body is working as a unit and there has been significant controversy with it still unclear who is exactly in control.

Such is the encompassing nature of the troubles, the matter was brought up in Thursday's meeting of Real members with Perez making clear that change is necessary.

"The federation has to change and modernise, the last days of every single season sees strange things happen, we have to stop that, the system must change because it is putting Spanish football at a disadvantage," he explained.

Whilst there is a sense that such change is just around the corner, the 70-year-old pointed towards recent Clasico matches with Barcelona as evidence that the system wasn't working properly.

"In the last Clasicos, there hasn't been any talk about football and that's bad, everyone can see that, I've only spoken once about the referees and it's time to help."

Real feel as though they haven't received equal treatment in recent years and Perez has called on the referees to be given more help in order to eliminate bad decisions which put an ugly focus on the defending European champions.

Asensio, the latest Real Madrid player to be given a new deal

Marco Asensio is the latest player to have his contract renewed by Real Madrid with his new deal running until 2023.

The playmaker, who has made a blistering start to this campaign including goals against Barcelona in the Supercopa de Espana, will have a press conference to mark the new deal on Friday.

Mendy to have surgery on ruptured knee ligament

Mendy suffered the injury during the first half of the Premier League leaders' 5-0 victory at home to bottom side Crystal Palace last Saturday.

The Frenchman had been on impressive form since he joined City from Monaco for a reported 52 million pounds ($69.97 million) fee in July.

He joked on his Twitter feed that he would be joining "Injury FC" on loan for a couple of months but hoped to return stronger.

City said on their website (www.mancity.com) that the player had travelled to Barcelona to see a specialist, after initial tests in Manchester, with the results on Thursday confirming the extent of the injury.

"Benjamin will undergo surgery tomorrow in Barcelona, and everyone at the club wishes him a speedy recovery," added City, who travel to Chelsea for Saturday's clash between the reigning champions and current leaders.