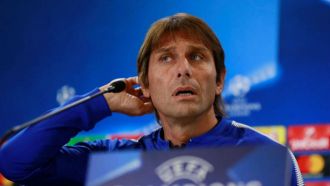 After it was confirmed that Diego Costa had returned to Atletico Madrid, his former Chelsea coach, Antonio Conte, suggested he didn't have a problem with the striker.

A long drawn out transfer affair is finally in the past, on the eve of the two clubs meeting in the Champions League.

"I do not have any problems [with Costa], we wish him well in the future," Conte said to reporters in his pre-match press conference.

The physical number nine can't face the west Londoners however, with the Rojiblancos still under the auspices of a FIFA transfer ban.

"Atletico are a very good team, with a lot of experience and who play very well in the Champions League," the Italian continued.

"In recent years Spanish teams have dominated the Champions League and the Europa League."

Eden Hazard has a chance to make an imprint on the competition, something not lost on the Chelsea coach.

"He proved it in every game, but this competition demands another level from a top player like him."

Simeone: "Conte is better than me"

Diego Simeone spoke before his side's clash with Chelsea in the Champions League at the Wanda Metropolitano on Wednesday night.

The battle between Courtois and Oblak will be an interesting one. Is one of them better than the other?

They are the two best keepers in the world. I really like them both.

Costa returns from England with the tag of being a problematic player. Do you think it was the lack of sun and the bad weather that caused some of that?

Your opinion of Conte's Chelsea?

This Chelsea is different from 2014. I am a big fan, they work collectively with balance and last season they won the league in the manner that they did. They are a very tough opponent with a manager with the ability to tell them what he wants. It's a difficult and very nice game.

Do you understand the comparisons between you and Chelsea?

Many teams look for different things to give them the chance to win. In the case of Chelsea, with Conte, they are not like us. He has always played the same way. There are similarities in terms of working but they are not like us, because he played and worked in the exact same way in his previous teams, at Siena and at Juventus.

In England, they think is it a battle on the touchline. Who is better? Simeone or Conte?

Bale: It was important to regain confidence in ourselves

After Gareth Bale's opening goal set Real Madrid on their way to victory against Borussia Dortmund, the Welsh forward confirmed that it was important for Los Blancos to regain their self-confidence after a troubling recent run of results.

A number of victories away from home have broken up what has been a surprisingly poor run of home results in LaLiga, the defending champions yet to win at the Estadio Santiago Bernabeu.

Unsurprisingly, this has brought criticism from outside Valdebebas and has left the team doubting themselves, but Tuesday's 3-1 victory was a perfect answer to such criticism.

"The most important thing was to remain in a strong position in the group by getting the three points, we needed to regain confidence in ourselves," he explained to beIN Sports after the game.

Barcelona hold a seven point advantage over Los Blancos in LaLiga, yet the 28-year-old believes that the winning mentality within the squad will help them to recover from a disappointing beginning to the campaign.

"It is important to win every game, we are not leaders in the league but we have a winning mentality," he continued.

"Wins build confidence and after that performance, we will have more of that."

Zidane: I'm happy for Bale, it hasn't been easy for him

In the face of strong criticism, Gareth Bale scored a memorable opening goal in Real Madrid's 3-1 victory over Borussia Dortmund, leading Zinedine Zidane to admit he was happy for the Welsh forward, who has not endured the easiest of times of late.

After Cristiano Ronaldo and Dani Carvajal missed early chances, there was a fear that Los Blancos' early-season profligacy in front of goal had reared its ugly head on the European stage.

Bale's outstanding left-footed volleyed calmed the nerves with the French coach making a point of praising the 28-year-old in his post-match press conference.

"I hope there are many more turning points for him, I'm happy for him, it hasn't been an easy time," he explained.

Borussia Dortmund have always been able to stand toe-to-toe with the Spanish champions in an attacking sense and this has been evident in all of the recent meetings between the two teams.

Under Peter Bosz's tutelage, this was likely be the case yet again although Zidane admitted that his team countered the threat posed by the hosts.

"We have watched a lot of Borussia's matches," he continued.

"We saw how they play football, that they are a team that plays and wants possession of the ball and we countered this very well."

Despite such a positive result, the 45-year-old was unwilling to look any further than the next Champions League match, maintaining that his team's performance was indicative of what they have been capable of in all competitions over the past year, rather than a special display reserved for the European stage.

"When you play this well people think it is because of the tournament," he said.

"But we also did the same thing in LaLiga last year.

"It will be a difficult season, a long season, we can be happy with what we achieved tonight."

In six previous visits to Signal Iduna Park, Los Blancos have failed to record a single victory and the French coach intimated that putting an end to this streak was an important achievement.

"It is not just another match, we have never won any of our matches here," Zidane noted.

"We talked about a team that could put us in trouble at any moment but we have finally got a victory."

What was a principle of agreement between Atletico Madrid and Chelsea, pending a medical examination and signature on the contract, is now a reality; Diego Costa is once again an Atletico Madrid player.

The Spanish-Brazilian, it should be remembered, will not be able to officially debut until January 1, 2018, although he is now in a position to train with his teammates to ensure he reaches optimum fitness over the next three months.

Approved by the FA (Football Association), the deal consists of a loan arrangement until the end of the season, when Atletico will execute a purchase option to keep Costa on the payroll for three more seasons, until June 2021.

Costa and Vitolo's acquisitions will also force the club to dispense with the services of two of their current players, since the mechanisms of financial control in LaLiga oblige him to adjust the expenditure pertaining to player salaries.