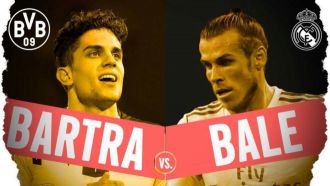 Bale vs Bartra: The rematch

Real Madrid's clash with Borussia Dortmund on Tuesday has many attractions with Los Blancos having never won there, important points are up for grabs and, additionally, it will be another head-to-head for Marc Bartra and Gareth Bale.

In the 2014 Copa del Rey final, Real Madrid faced eternal rivals Barcelona and the game looked destined to end 1-1; that is, until the 85th minute.

Barcelona looked tight and compact until Gareth Bale picked up the ball on the left, still some distance from even a threatening position.

The Welshman found a burst of energy and extraordinary power, charging down the wing and beating Bartra right out on the touchline before charging down on Pinto's goal and slotting the ball through his legs to deliver the trophy for Los Blancos.

That was, without doubt, Bale's best individual moment since arriving in Madrid and one that Bartra won't have forgotten.

In 2016 Bartra moved on to join Dortmund, where new challenges, and some old, awaited him.

The Germans were drawn against Real Madrid in the 2016/17 Champions League, but the defender missed the game in Germany while Bale was absent in Spain.

On Tuesday, the pair will go toe-to-toe again, unless a late injury hits either, in what should be a fascinating duel to keep track of.

Zidane: Every three days we need to prove ourselves

Despite a tough start to the new LaLiga season, Zinedine Zidane is in positive spirits ahead of Tuesday night's Champions League meeting with Borussia Dortmund and he insists that confidence has not dropped within the squad.

The European and Spanish champions are already seven points adrift of Barcelona, but a win over Alaves at the weekend could provide a platform upon which they can build in the coming weeks, starting in Germany.

"We are feeling good," Zidane said at his pre-match press conference.

"After a good victory at the weekend we are looking forward to playing the Champions League again."

The Frenchman, however, accepts that it will not be an easy night in Dortmund but is determined for his side to play good football.

"It is difficult to play in any stadium," he said.

"We have never won in Dortmund and it is a challenge [to win.]

"We want to play good football and for it to be a good match."

While it has been a difficult few weeks for Real, Zidane says that he has never addressed the disappointing run with the players, and that they are constantly trying to prove themselves.

"This match can be a turning point, but every three days we have to prove ourselves.

"I did not talk to the players about this moment.

"It is another game and another competition."

Casemiro has been pivotal to Real's success in recent seasons and the coach has even compared the Brazilian to some great players of the club's past.

"He can be compared to [Claude] Makelele or [Didier] Deschamps.

"Every time a player balances between defence and attack they are doing a job like those guys.

"What he has achieved does not surprise anyone and he is getting better with every season."

After lobbying from Real Madrid, Bayern Munich and Juventus, UEFA threatened the French club with expulsion from the 2018/19 UCL.

After PSG's big summer acquisitions, Spanish daily El Pais report that UEFA threatened the Ligue 1 club with expulsion from the 2018/19 Champions League if the Parisian outfit failed to comply with the Financial Fair Play regulations. The warning came after UEFA were pressurized to act following complaints from clubs with the prestige and power such as Bayern Munich, Juventus and Real Madrid.

Following the pressure from UEFA, club owner Nasser Al-Khelaifi was forced to react and immediately contacted the agents of eight players who were deemed as transferable by the French side which caused obvious tension amongst Unai Emery's squad. PSG general manager Jean-Claude Blanc moved quickly and withing 48 hours Di María, Javier Pastore, Blaise Matuidi, Lucas Moura, Julian Draxler, Hatem Ben Arfa, Serge Aurier and Thiago Silva were on the transfer market with just two actually exiting the Parisian side (Aurier moving to Tottenham for 25 million euro and Matuidi to Juventus for 20 million).

El País relay how the players felt offended by the decision by the PSG owner who was prepared to cause a degree of last minute upheaval at the club in an order to ensure that the Neymar deal was concluded with no fall-out from a potential UEFA Champions League expulsion.

Rather than reducing the number of teams in Serie A, international fixtures need to be better planned to deal with player workloads, Napoli coach Maurizio Sarri said ahead of his team's Champions League match against Feyenoord on Tuesday.

Italian FA president Carlo Tavecchio and Juventus coach Massimiliano Allegri are among those who would like to cut the number of teams in Italy's top flight.

However, Sarri pointed out that such a cull would stifle the growth of the sport and a better solution would be to streamline the international fixture programme.

"An 18-team league has the pro of reducing the number of games and the con of taking away a dream from many cities, reducing the number of potential football fans in the long term," Sarri said on the eve of the match in which both Napoli and Feyenoord will be looking for their first group phase victory this season.

"I think we should blame the national team (for the crammed calendar as we should) find a specific window during the year when the national teams play... and the rest of the season some time should be given to clubs because this would give more quality to the games."

Sarri's views are in contrast to Napoli president Aurelio De Laurentiis, who said on Friday that a 16-team Serie A with just one relegation spot would make the league more competitive.

Tavecchio said on Monday that he hopes to find a "reasonable solution" to cut the number of teams in Italy's professional leagues in three to four years.

Tavecchio told Italian radio channel Rai Gr Parlamento that he will start discussion at the beginning of 2018 with the leagues and the professionals involved.

He suggested last month as well that it could be possible to achieve a reduction of two teams in each of Italy's professional leagues within three years.

Juventus fined and president suspended over tickets for hardcore fans

Italy's soccer federation (FIGC) has fined Juventus, its most successful team, over an alleged scheme of giving tickets to hardcore fans to buy peace in the club's terraces.

FIGC had fined the club 300,000 euros (263,622.92 pounds) and given further fines and temporary bans to four of its executives including president Andrea Agnelli, it said in a statement on Monday.

Juventus said it would appeal against the ruling. It denied wrongdoing and said it had always worked with police to ensure public safety and order.

Investigators had been looking into whether the club gave tickets to fans known as ultras to avoid violence or racial abuse in the stands that might bring fines or docked points.

Such a large number of tickets had been given out over such a long period of time that rules on contributing to fan clubs would have been violated, the FIGC court said, although there was insufficient proof that the recipients were touts or criminals.

"It is no mystery that the entire management was committed to repairing relations with the ultras," the ruling read.

Agnelli, a scion of the family that owns carmaker Fiat Chrysler, said in May he met the ultras to make sure they did not feel discriminated against, and to avoid "problems of public order".

The FIGC's court said Agnelli was not guilty of separate accusations that he knowingly met with a member of the powerful 'Ndrangheta mafia group who was involved in the ticket scam.

When he met alleged mobster Rocco Dominello -- who has denied any wrongdoing -- Agnelli was "totally unaware" of any illegality, the court wrote in its ruling.

Agnelli, who is also the head of the European Club Association (ECA), is now suspended from his role at Juventus for a year and will have to pay a 20,000-euro penalty.

The three other officials have been given the same fine and banned from their posts for up to one year and three months. ($1 = 0.8435 euros)