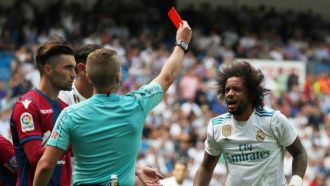 It is thought to have been years in the making but only now, in Real Madrid's opinion, is the organised officiating bias against Los Blancos taking effect.

Amid the aftermath of Angel Maria Villar's arrest and the subsequent shake-up at the Spanish FA (RFEF), Real feel that Atletico Madrid president Enrique Cerezo and former Barcelona chief Joan Gaspart have been formulating a way to punish the Champions League holders.

Back in 2004, Florentino Perez backed Gerardo Gonzalez Otero in the RFEF run-off against Villar, since which the Madrid side have been cut off from the governing body's establishment until just under a year ago.

Remaining in the background over the years, only now it is emerging what some are comparing to a Calciopoli sized scandal, and since Villar's arrest Real feel the tide has turned dramatically against them.

It all began with the soft penalty given for Luis Suarez's tumble in the Supercopa de Espana and Cristiano Ronaldo's red card later in the first leg clash.

From there, Madrid have five penalties they feel were denied them in unfair fashion, along with harsh expulsions as Marcelo and Sergio Ramos have both seen red.

In public, the past weeks have seen Zinedine Zidane and club captain Ramos feel the need to speak out on this matter, the defender claiming: "I am not surprised that they don't award penalties for us, but that they do for Barcelona."

Now that the RFEF is due a big turnover post-Villar, Real hope to be part of a change that will see total equality instilled across LaLiga, as they feel that the season's decisions so far have been far from a coincidence.

When will Messi be rotated?

Despite multiple rotation already this season under the impeccable management of Ernesto Valverde, Barcelona's main man Lionel Messi has played every minute so far.

Given that others have been rested and rotated reasonably frequently, it does beg the question of when the Argentine will be given a break?

With the precedent of past seasons, it was necessary for Messi to feature in the vast majority of games, with rest only being graded when the match allowed for it.

At the start of this season though, he hasn't even been substituted early when games are already wrapped up, and it doesn't look like things are going to get any easier over the next month.

During midweek, Barcelona travel to Lisbon to face Sporting in the Champions League and after the win against Juventus, it doesn't appear that Valverde would bench Messi for a game that would strengthen their lead in the group and have them very much on course for qualification.

Las Palmas then arrive at the Camp Nou, just before the international break where Messi will be subjected to greater wear and tear.

A home fixture against Peru and the trip to Ecuador will decide the future of Argentina and whether or not they travel to Russia for the World Cup next summer. Needless to say, it is vital that Messi plays every minute of those matches.

After that, the Estadio Wanda Metropolitano awaits, followed by another Champions League duel against Olympiacos and a LaLiga clash against Malaga.

That means that the first leg of the round of 32 in the Copa del Rey on October 25 is the only game he could feasibly be rested, following a month of massive toil.

Real Madrid may have had six players out with injury, but Zinedine Zidane stayed true to his philosophy of rotation and he left Luka Modric and Gareth Bale on the bench as Los Blancos visited- and ultimately defeated - Alaves on Saturday afternoon.

Dani Ceballos was one of those to benefit and he was handed his first start of the season, meaning that 21 members of the Frenchman's squad have seen their name written on the teamsheet so far in 2017/18.

The fact that Ceballos repaid Zidane's trust with a match-winning brace proved that this policy can still function.

Only Zidane's son Luca, the third-choice goalkeeper, as well as Jesus Vallejo and Achraf, have yet to start a match this season.

Real Madrid see Ceballos as the natural heir to Modric

It was a breakthrough Saturday afternoon for Dani Ceballos, as the 21-year-old scored a memorable brace to hand Real Madrid a vital 2-1 victory against Alaves.

It was important for him to do well on his first start for the club, with those at Valdebebas seeing him as the natural heir to Luka Modric.

Modric was actually left out of Saturday's encounter as the Croatian was rested ahead of the midweek clash with Borussia Dortmund, yet the Spaniard's goalscoring exploits are sure to push him up the pecking order in Zinedine Zidane's thinking.

Ceballos' natural ability has never been in any doubt, as he was exquisite in the summer's European Under-21 tournament and rightfully won the best player award.

He was quickly added to Los Blancos' collection of young stars and it has become increasingly clear that the sky truly is the limit for him.

A miniature transfer war began, with Barcelona having also attempted to sign him in the summer, but it quickly became clear though that the defending Spanish champions were willing and able to do whatever it took to secure Ceballos' services.

In Modric, Zidane can count on a 32-year-old veteran of elite midfield play and what we are currently witnessing with Ceballos controlling play from a deeper position, whilst also maintaining his mobility, is something straight out of the Modric playbook.

The Croatian's style has been unique for years, yet Los Blancos feel as though they are prepared for when Modric eventually departs, given their summer recruit.

The 2017/18 season will be one of development for the Spaniard and he will learn as much as possible from Modric and will take note of the nuances within his play.

This will prove to be an invaluable experience for the youngster, something that Zidane is acutely aware of.

There is an embarrassment of riches at Valdebebas at present and Ceballos' display has seen him steal the headlines, yet it is worth remembering Mateo Kovacic is yet to come back from injury.

Kovacic started the campaign brilliantly and could also feel as though he is the future of the midfield at the Estadio Santiago Bernabeu.

Competition for minutes was never a secret with Los Blancos, meaning that the former Real Betis star made a conscious choice and he is already proving that he is brave enough to take his chances.

With regards to talent, the defending European champions are comfortable for a little while yet.

Barcelona's claims about the potential signing of Liverpool's Phillipe Coutinho have been rubbished thanks to new evidence that has recently come to light.

The Catalans had negotiated with the Brazilian behind the backs of the English club, despite having rejected such accusations when they explained that the deal fell apart because Liverpool demanded an exorbitant fee.

German newspaper 'Der Spiegel' has published documentation via Football Leaks that confirm Liverpool's version of the story, completely rejecting suggestions that they asked for 200 million euros on deadline day, as claimed by Albert Soler.

The Reds had already made it clear that Coutinho was not for sale and emails from July 20 between Oscar Grau, executive director of Barcelona, and Michael Edwards, Liverpool's sporting director, made clear that "he [Coutinho] is not for sale at any price."

In early August, the Blaugrana returned with another offer despite the negative response, offering 90m euros plus another 40m in add-ons.

Edwards could not have been clearer on that occasion.

"I politely request that you stop publicly and privately harassing Coutinho. No amount of money will change our minds," he said in correspondence sent to Grau.

Liverppol accused Barcelona of negotiating with the player in secret but, according to the documents, Grau suggested that this was made up by the Premier League side.

There was, in fact, a 20 page agreement between Coutinho and Barcelona on August 31 and the Brazilian would have earned 115m euros over five years with his agent pocketing 10m if the up-front transfer fee was 100m.

As a result, Liverpool complained and they remain furious with the behaviour of their Spanish counterparts.