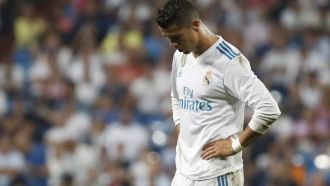 Real Madrid's home loss to Real Betis in LaLiga on Wednesday saw Los Merengues draw a blank for the first time since back in April 2016.

Real Madrid's LaLiga defeat to Real Betis on Wednesday saw Los Blancos fail to score for the first time in 17 months, ending a streak that had lasted for 73 games.

Real Madrid had last been shut out in spring 2016

Zinedine Zidane's men had been on target in every match they had played since a goalless draw with Manchester City in the Champions League in April 2016.

Having beaten Bundesliga club Bayern Munich's European record - set in 2014 - of netting in 61 consecutive fixtures in May, Real then equalled Brazilian side Santos' 1963 milestone of 73 in Sunday's 3-1 LaLiga win at Real Sociedad.

Their run stopped 23 short of the 96-game sequence established by Argentinian club River Plate between 1936 and 1939.

Zidane: The ball just didn't want to go in

It was not Real Madrid's night as Real Betis stole all three points at Estadio Santiago Bernabeu on Wednesday, leaving Zinedine Zidane to admit that the footballing gods were against his side.

Dropping seven points behind Barcelona after just five games, Los Blancos allowed the visitors to score in the 94th minute to condemn the defending champions to their worst start at home in LaLiga for over 20 years.

"It's bad," the coach remarked to reporters. "This is football, when the ball just did not want to go in, this can happen.

"We did not have a great game but neither a bad game. The first minutes of the second half were good, then it's true that we rushed it a little.

"We had 26 or 27 chances, today the ball did not want to go in, especially here, in our home stadium. I love this word, tranquility. We are going to have tranquility. We will be calm."

Draws with Levante and Valencia have been followed up by Real's first goalless outing in well over a year, although Zidane has come to terms with the size of the task he now faces.

"It's clear, we have to live with it," Zidane confessed. "There have been three games, the start of our league campaign here at home has not been good enough.

"We did not think it was going to be like this, but we can not change it.

"What we can change is the next game, which we'll do our best to win. And in the next home game in the league we have to do everything to try to win."

While Gareth Bale and Isco will inevitably come in for criticism for their lack of goalscoring instinct, the coach was asked if he had any issues with Cristiano Ronaldo's first league performance of the campaign.

"We are happy to have Cristiano with us and for him to be in the team.

"I do not regret anything, I always want to win the game. You can make different substitutions, but the idea is the same, to go for the win."

Forlan: Neymar would not have done to Messi what he did to Cavani

Perhaps it's not a surprise when a clash of egos bears itself on the pitch as it has with Neymar and Edinson Cavani but Diego Forlan reckons the Brazilian would not have treated Lionel Messi like he has the Uruguayan.

The Paris Saint-Germain pair have hit the headlines for the wrong reasons since the weekend win over Lyon, during which they persistently argued over set piece duties.

"[Cavani] deserves respect," Forlan told Radio Sport 890. "He has been scoring goals for years and taking penalties, there has to be respect.

"Neymar would not have done that to Messi. He did not want Cavani to take the penalty. He was like a little boy annoying him.

"It's a problem between Neymar and Cavani, those things happen on all teams. What does not make sense is what Alves does, he doesn't give the ball to Cavani but gives it to Neymar as if he were his bitch.

In fact, over the course of Neymar's stay in Barcelona, Messi handed over 11 spot-kicks to his MSN colleague.

As if Zinedine Zidane's problems weren't growing fast enough already, Marcelo was forced to leave the pitch as Real Betis beat Real Madrid due to injury.

The Brazilian pulled up with a muscle problem early in the second half and was replaced by Lucas Vazquez, with the nature and seriousness of the problem as yet unknown.

Reserve left-back Theo Hernandez is already ruled out for two weeks with a dislocated shoulder suffered at Real Sociedad on the weekend, which points to Nacho Fernandez being deployed in the role at Alaves this coming Saturday.

There's a substantial queue into Los Blancos' physiotherapy room without Marcelo joining it, as Karim Benzema, Jesus Vallejo and Mateo Kovacic are all currently unavailable for selection.

UEFA have announced that the Wanda in Madrid will host the Champions League final in 2019 after assessing its suitability and concluding it fit the bill.

The Wanda Metropolitano will be the host of the 2019 Champions League final, UEFA officially announced on Wednesday. The home of Atletico Madrid opened last Saturday with a victory for the hosts against Malaga in LaLiga thanks to an Antoine Griezmann goal and it has been selected ahead of Baku where the 2018-19 Europa League final will be held.

UEFA's report successfully rated the Wanda's capacity, accessibility, security and the evacuation procedures. They did not, however, comment on the quality of the surface of the pitch, which was recently laid down and might take some time to bed in.

The Wanda has a capacity of 68,000, which seems sufficient, but there were fears that Atletico might lose out given the lack of VIP seats but this was vehemently denied.

Simeone: Atletico Madrid are stronger when there is competition within the squad

Atletico Madrid played in the earlier kick-off on Wednesday night, beating Athletic Club 2-1 at San Mames, and head coach Diego Simeone was very happy with the way in which his squad is organised.

Angel Correa opened the scoring early in the second half before Yannick Carrasco doubled their lead, and former Atleti midfielder Raul Garcia pulled one back for Athletic in injury time.

"Our goal was to give continuity in the game and both [Correa] and Thomas [Partey] have managed to integrate themselves into the squad," said Simeone.

"We are better when there is strong competition within the squad - hopefully we can understand that."

The Argentine coach is aware of how difficult it is to take all three points away from San Mames and believes that his side were fantastic from the 20th minute to the final whistle.

"It was important to win here," he continued.

"After the first 20 minutes, we had clear goalscoring situations with [Nico] Gaitan, [Antoine] Griezmann and Filipe [Luis].

"[Jan] Oblak made a great save [from Aritz Aduriz's penalty] and that allowed us to grow in the first half.

"Gimenez gave us a lot in the second half; he was very good and forceful."

Saturday night saw Atletico open their new ground, the Estadio Wanda Metropolitano, and it was announced on Wednesday that it would host the 2019 Champions League final.

"It was an important step for the club and hopefully we can accompany this effort on the field," said Simeone.

"After five games away from home [four in LaLiga, one in the Champions League], the response remains positive."