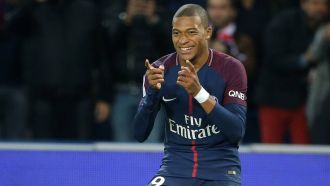 Theo, Mbappé and Dembelé are finalists for the Golden Boy 2017

Italian newspaper Tuttosport have released the list of 24 names that are in contention to win the Golden Boy 2017 and PSG's Kylian Mbappé currently leads all voting.

Italian newspaper, Tuttsport, have released their list of 24 players that have made the Golden Boy 2017 shortlist, the best under-21 player in Europe. Paris Saint Germain's summer signing, Kylian Mbappe, Real Madrid's summer addition, Theo Hernández, and Barcelona new boy Ousmane Dembele, who was recently ruled out for three and a half months, all make the list. The Spanish contingent on the list is strong and includes: Adrián Marín (Villarreal), Pol Lirola (Sassuolo), Mikel Oyarzábal (Real Sociedad) and Javier Ontiveros (Málaga).

Tuttosport provide a poll on their website for fans to select their favourite option. At the moment, PSG's Mbappe leads the way with 48% of the vote followed by AC Milan's Gianluigi Donnarumma, who has 13% of the overall clicks.

Manchester City's Brazilian striker, Gabriel Jesus, and Manchester United's English attacker Marcus Rashford are some of the other noticeable names on the list. Wayne Rooney, Sergio Aguero, Cesc Fabregas and Isco have all won the Golden Boy in the past, which is a testament as to the level of class the award deals with.

Alarm bells were ringing throughout the French capital on Sunday evening as Edinson Cavani and Neymar squabbled over who took a penalty against Olympique Lyon, but Paris Saint-Germain have now decided that the Uruguayan forward will remain the club's penalty taker.

Neymar's 222 million euro arrival looked to have shifted the balance of power at the Parc des Princes.

Unfortunately for the world's most expensive footballer, the 30-year-old mustn't have received the memo as he stood his ground.

PSG had hoped the issue could be resolved between the two individuals but the story has since taken on a life of its own on social media.

Rumours of Neymar 'unfollowing' the former Napoli forward quickly appeared, rather predictably, and the whole matter simply refused to go away.

As such, the Parisian club have been forced to make a decision of their own on the matter.

RMC reported on Monday that club President, Nasser Al-Khelaifi had met with both of the players in question to discuss the issue, such was his concern over team harmony.

Further meetings with Unai Emery and Antero Henrique are scheduled for Wednesday.

Alves gets involved in the war between Neymar and Cavani

The PSG right-back tried to explain why he'd denied the ball to Cavani at a free-kick, before handing it straight to fellow Brazilian Neymar.

Neymar, Cavani and, in the middle, Alves. The tension between the first two to take PSG's penalties and freekicks is evident [it's on the front page of L'Equipe] and the Brazilian right-back has decided to get involved, and he's quite plainly on his countryman's side.

Alves hides the ball from Cavani

The scene was set in the 48th minute. Neymar was fouled just outside the box and Dani Alves imposed himself in a bid to get the ball while his teammate was still on the ground. Cavani bustled over looking to get his hands on the ball, but the former Barcelona and Juventus player kept hiding it from him, despite his ever more anxious pleas. But as soon as Neymar got up and came over, Alves was quite happy to hand the ball to him.

Alves tries to explain his behaviour

Alves explained the situation after the match, attempting to deny he'd shown any favouritism to his Brazilian teammate: "I was going to take it. I got the ball to take the free-kick, because I've scored some stunning goals", said the right-back. "I was confident. But that's not important. What's important is that the team is more important than any individual. At that point I wanted to take responsibility, but then Ney took the ball and ended up shooting. I took the ball with the aim of shooting, but unfortunately I couldn't".

Zidane: "It'll take time before we see the best of Gareth Bale..."

The French coach also confirmed in the pre Betis press conference that he has renewed his contract with the current league and European champions.

Real Madrid coach Zinedine Zidane said on Tuesday that he has renewed his contract with the Spanish champions, although the deal has not yet been announced officially.

Madrid have renewed various players' contracts in recent weeks and the Frenchman told a news conference that he too has extended his deal, which was set to expire at the end of this season.

"In terms of the renewal, it's already done, but it doesn't mean anything," said Zidane. "I care about the day to day and I'm not looking further than that, this is complicated."

The French coach was also asked about Welsh player Gareth Bale's form and  claimed that when Bale is on top of his game he's excellent. "He needs time and slowly but surely we're starting to the see what he can do. It will take a while before we see the best of Bale, but he's heading in the right direction and doing well”.

Zidane took charge of Real in January 2016 and has led them to consecutive Champions League trophies and their first La Liga title since 2012, as well winning the UEFA Super Cup twice and the FIFA Club World Cup.

Real Madrid continue their league title defence on Wednesday as they host Real Betis although they will be without defender Theo Hernandez who injured his shoulder in Sunday's 3-1 win at Real Sociedad.

"He has been diagnosed with a partial dislocation of the right shoulder," Madrid said in a statement on Tuesday, with reports indicating Hernandez will be out for a fortnight.

The Serie A champions are planning ahead with Atleti stopper Oblak on their wanted list with the Slovenian having a contract with the LaLiga side through to 2021.

Juventus are planning ahead for the time when 40 year old keeper Gianluigi Buffon hangs up his gloves at the end June 2018 with the Serie A outfit already drafting in former Arsenal stopper Wojciech Szczęsny.

Speaking to Goal, Atletico goalkeeper Jan Oblak's agent Miha Mlakar stated after being asked with the rumours linking his player with the Turin side that in Italian football "only Juventus can be consideres asa top side". The Slovenian is not short of would-be suitors with Ligue 1 side PSG also contemplating reinforcing their goalkeeping position for the 2018/19 campaign. Despite the overtures directed at the Slovenian international from the European big-guns, there is still the matter of the 24 year old's 100 million euro buy-out clause and his contract which ties him to the LaLiga side through to 2021.

The Atleti No. 1 is arguably Diego Simeon's most in-form player at the club with his saves being decisive in Atleti's solid start to the 2017/18 campaign. In the Wanda Metroploitano opener last Saturday against Malaga, the Slovenian pulled off two excellent goal bound stops from Borja Baston and later from Rolan to ensure the "Colchoneros" home debut at the new stadium ended up in a victory.

Morata: "I was happy in Madrid, but couldn't stay as substitute"

Chelsea's new Spanish striker opened up about his departure from Madrid, his previous managers, making the World Cup and his goalscoring intentions.

Álvaro Morata has been speaking openly about his departure from Real Madrid and arrival at Chelsea over the summer, which comes as a timely reminder to the Spanish and European champions with questions being asked about their striking options. In an extensive interview with the Daily Mail, the Spanish international also talked about his managers, the pressure on him and his approach to goalscoring while in London.

Morata on... managers he's worked with:

"Last week I saw a photograph from the FIFA coaches’ conference and as I scanned across, I’m thinking, 'I’ve played under Zinedine Zidane, Carlo Ancelotti, and Jose Mourinho at Real Madrid.' Then there was Max Allegri at Juventus.

"Now I am with Antonio Conte, who originally signed me for Juve. I am only missing a Guardiola or a Klopp!"

Morata on... the anti-semetic chant from Cheslea fans last week

"It’s clearly a sensitive issue. There are many ways to enjoy yourself at a game and to cheer on your team or your favourite players. But I am clear. I am against any songs that will offend people on the basis of religion or race. We need to cut it out.

"Football is only a sport, let’s use it as a positive vehicle. It’s not just that but kids who follow us and who want to be like us one day and we need to set the best example to them in the stands. By all means, cheer me on, sing my name, sing songs about Chelsea but let’s avoid this chant. The fans have been extremely welcoming to me and hopefully we can move forwards together now.’

Morata on... the transfer fee and pressure to succeed

"When I first came, I felt a lot of pressure. The price tag is a big deal. I missed an important penalty in the Community Shield. I knew straight away I would need to grit my teeth and that there would be a load of criticism. It only made me more determined to prove any critics wrong and work harder than ever before."

Morata on... scoring goals, recently only with the head

"If I score every game with my head, no problem. I don’t care if it’s a bobble off my knee or it goes in off my arse, a goal is a goal! At Real Madrid, I did heading drills with Cristiano Ronaldo. You see him go up for headers, that spring and power, he is a real beast.

"At Juventus, I saw Fernando Llorente, how he finds space and directs his headers. I like the physical challenge. Last week, I played against Wes Morgan and Harry Maguire... big guys. Cesc Fabregas was putting in good corners that I thought I could get to and bury but there were some coming in and I couldn’t even get a jump up against those guys.

"But then I got between them to score. You have to be clever. I’m not worried - at Juve I trained against Giorgio Chiellini and Leonardo Bonucci every day."

"Zidane wanted me to stay and I was happy in Madrid. But I couldn’t stay to be a substitute. You reach a point that you need to play, to grow up, to escape a comfort zone. It’s about being comfortable. I don’t want that. I am ambitious and hungry to succeed.

"For Spain, the more I play, the more goals I score, the more chance I have of making the World Cup and starting games."