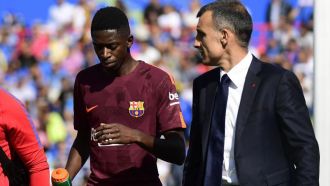 Dembele out for three to four months with hamstring tear

When Ousmane Dembele pulled up during Barcelona's game at Getafe, a time period of three weeks was the initial expectation however it's now emerged that the winger will miss three to four months.

The club have confirmed that Dembele has suffered a tear to the tendon of his left femoral bicep and surgery is likely.

During the course of next week, the Frenchman is to travel to Finland for treatment under Dr. Sakari Orava, a specialist who has previously cured similar ailments for Thomas Vermaelen, Pep Guardiola and Marco Van Basten.

With that setback to his hamstring, the Blaugrana must find a way forward without their big money signing of the summer while the man himself loses precious bedding in time.

Indeed, Dembele is to sit out the first round of LaLiga fixtures as well as the Champions League group stage, handing a golden opportunity to the likes of Gerard Deuolofeu, Paulinho and Aleix Vidal.

Real Madrid have equaled the record of scoring in 73 consecutive matches set by Santos in 1963, after Borja Mayoral put them ahead against Real Sociedad.

The run began on April 30th, 2016, coincidentally also at Anoeta with Gareth Bale giving Los Blancos a 1-0 victory and since then no defence has been able to hold them at bay.

First they bettered the Spanish record that Barcelona had of scoring in 44 straight games and after that they overcame the European best of 61 by Bayern Munich before now equaling the all-time best set by Pele's Santos.

Zidane: More than the goal, I am impressed with the work Mayoral has done

After two deflating draws against Valencia and Levante, Borja Mayoral spearheaded Real Madrid's return to winning ways, yet Zinedine Zidane admitted he was more impressed by the work the forward did for his team than his opening goal.

Following a disappointing season on loan with Wolfsburg, Mayoral returned to Santiago Bernabeu hoping he could take the position of the departing Alvaro Morata.

In his post-match press-conference, the French coach made clear that he was impressed by the work the 20-year-old got through on Sunday evening.

"He is part of the squad, he is young but I knew he could play an important role, for him the goal is very important but I was impressed by the work he has done, how he moved and helped his team," he explained.

Gareth Bale responded to recent criticism by adding Los Blancos' third goal with a quite sumptuous chipped effort, Zidane praised the Welsh forward after the game, noting that it wasn't easy for him to perform with such criticism over his recent performances.

"I'm very happy because there has been a lot of talk about him [Bale], but he has shown exactly how good he is tonight, we have to be patient with him."

Real Sociedad's wonderful attacking football has been one of the highlights of the LaLiga campaign so far yet Real Madrid were able to stifle them, a feat that was not lost on the 45-year-old.

"We know that Real get you into trouble if you leave spaces in behind, they make things difficult but we put good players in our defensive line and managed to stop them."

Many fans are wondering how Paris Saint-Germain are paying for Neymar's world record transfer fee, but perhaps the answer lies in the other fans with the player's name and number on their backs.

However, with the data provided by BFM Sports, there are now genuine fears that the club cannot restock the No. 10 shirt for another two months.

Arsenal produced a vastly-improved away performance to have the better of a 0-0 draw with Premier League champions Chelsea at Stamford Bridge on Sunday.

After defeat at Stoke City and a thrashing at Liverpool, Arsene Wenger's side showed far more steel and hit the post through Aaron Ramsey as well as having Shkodran Mustafi's headed goal disallowed as they had the better of the chances.

Tempers frayed near the end with Chelsea's David Luiz shown a red card for a wild tackle on Sead Kolasinac -- their third red card of the season from only five league games.

Arsenal's draw snapped a five-match losing streak away to Chelsea in the league and left them in 12th place with seven points. Chelsea are third with 10 points.

"It was about mentality and a response from our last away game. We could have won it. It was an intense game," Wenger said. "The battle was total.

"We were focussed and determined. We tried to play when we had the ball and we were close to winning the game. With a bit more freedom we would have won the game."

Wenger's side were savaged by former players and pundits after the 4-0 loss at Liverpool last month but showed far greater steel on Sunday and a point was the least they deserved.

They have still not scored away in the league this season but came close on several occasions against Antonio Conte's side who, after a lively start, were second best.

Danny Welbeck headed one good chance over and Alexandre Lacazette shot too close to keeper Thibaut Courtois after Hector Bellerin had raced to the byline and cut back an inviting pass.

Pedro wasted Chelsea's best chance in the first half when he was sent clear by Cesc Fabregas but finished tamely.

Ramsey went closest for Arsenal when he wriggled through into Chelsea's area and prodded a shot against the post with Lacazette unable to convert the rebound.

The chances dried up after the break prompting Arsenal to introduce Alexis Sanchez after he was left on the bench while Chelsea threw on Eden Hazard for Willian.

Mustafi thought he had won it for Arsenal when he met a free kick with a downward header but he was adjudged offside.

Arsenal's hearts were in their mouths when Hazard slalomed through and pulled the trigger but his fierce rising drive was well held by the perfectly-positioned Petr Cech.

A disappointing Chelsea display ended on a sour note when Luiz followed through recklessly on Kolasinac and referee Michael Oliver reached for his red card.

"We have great respect for officials, but it is strange to finish a third game in a row against Arsenal with 10 men," Conte said. "You need to see what happened before the tackle."