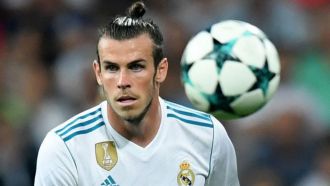 The motivation to win titles has not been lost from Real Madrid this season, according to Gareth Bale, and the Welshman has urged fans to be patient following to poor draws.

Both Levante and Valencia have taken a point home from the Estadio Santiago Bernabeu in recent weeks, dropping Real off the early pace.

"We need to be calm and take it game by game," he told an Adidas event in Madrid.

"We had a great start with the two titles, but we want to keep winning. Our goal has not been achieved yet and we want to win everything.

"We have been the first team to win two Champions Leagues in a row and now there is the motivation to win a third."

There are plenty of objectives on Bale's mind for the season ahead, including World Cup qualification with Wales, while he also discussed his favourite ever goal.

"The World Cup is a huge challenge for us, as was the European Championship a year ago," he added. "We will fight until the end to qualify.

"Probably the Decima goal is the most important of my career and I will never forget it.

"Every goal is important and special with Madrid, and hopefully I'll score in more important matches."

Theo's chance to shine with Marcelo out

Real Madrid youngster Theo Hernandez is set to have another chance to impress against Real Sociedad on Sunday with Marcelo suspended although there is a possibility that that versatile defender Nacho Fernandez could also play.

Logic suggests that it will be Theo who is given the nod by coach Zinedine Zidane as he was signed from Atletico Madrid for this very reason to provide a capable replacement for Marcelo who has not had a worthy rival for several seasons at left back.

Marcelo's ban for his dismissal, the third sending off that the club have had in seven official games, will be for just one game and is likely to give Theo the chance to impress Zidane who pushed for his signing.

It will be Theo's third official game in a white shirt after he made his debut in the Supercopa de Espana against Barcelona, playing the last 15 minutes.

Last Sunday he started against Levante, intriguingly behind Marcelo with the players exchanging positions but the experiment was not entirely successful.

Against Real Sociedad, Theo must show that he is ready to play for a club with the pressure and demands of Real Madrid who need to win after their two recent draws in La Liga against Valencia and Levante.

The financial outlook for Real Madrid following the double winning 2016/17 campaign has been revealed ahead of the club's Annual Assembly on October 1.

Real president Florentino Perez and his board of directors must gain official approval from the members to pass the budget, as well as its forecasts for the 2017/18 season.

Coming out of the previous campaign with a whole host of silverware, Los Blancos earned 674.6 million euros in operating income with operating profit amounting to 137.8m euros.

Furthermore, the treasury balance of Real Madrid is due to be settled at 178m euros, the second highest in club history as Zinedine Zidane holds vast swathes of transfer funds at his disposal.

While there was great success on the pitch, in reality this meant higher outlays in terms of expenses and bonuses, totalling 70m euros.

The opportunity for young forward Brahim Diaz to move to Real Madrid has emerged through the British press, although Manchester City boss Pep Guardiola has stated that his club is the one who has given the player a big chance.

Joining the Premier League outfit from Malaga in 2013, the 18-year-old is now on the verge of the senior side at Eastlands but could be tempted by a return to Spain.

"Manchester City have given him the opportunity to be a professional here," Guardiola told reporters. His family is happy.

"He has to know that in any team it is not easy to play. But in the end they will show their talents on the field.

"With talented players, clubs must make the effort to keep them, in salary and in first-team opportunities. We did it with Jadon Sancho, although he left, we did it with Tosin Adarabioyo."

Watford are next on the horizon for City, a game which they won with ease on the final day of last season.

"I would like for everybody to be involved but I think about every game and what is the best team to play," Guardiola noted. "We will see.

"It will be a demanding game, especially after just three days and the travelling but we have to handle the situation.

"Last season we had a problem scoring. But now we have players that play more inside and not wide. They help our strikers."

Liverpool midfielder Philippe Coutinho is ready to start for the first time this season when they host Burnley in the Premier League, manager Jurgen Klopp said on Friday.

After failing to complete a move to Barcelona in the transfer window, the Brazilian was back in action from the bench during Liverpool's 2-2 Champions League draw with Sevilla at Anfield on Wednesday.

"You can build up, you can get minutes when you start. It's not the moment I talk about the line up of tomorrow, but he should be ready," Klopp told a news conference ahead of the Burnley game on Saturday.

"I was really happy with how the crowd welcomed him. For him it was good. For sure, we're ready to think about him (playing Burnley).

"He has trained outstanding since he's back. The (Sevilla) game was not perfect of course, but it helped him and helped us."

With Sadio Mane out of action following his red card against Manchester City, Klopp is considering Coutinho or new signing Alex Oxlade-Chamberlain as a temporary solution on the left wing.

"It's always difficult to replace top-class players but we did it well towards the end of last season (when Mane was out)," Klopp added.

"We knew there would be moments when Sadio wouldn't play. That's why we built the squad. Roberto (Firmino), Phil and Alex can play on the left. We can change the system. We can do a lot of things."

Klopp confirmed that forward Danny Ings has returned to training after recovering from a knee injury but midfielder Adam Lallana and full back Nathaniel Clyne remain on the sidelines.

Burnley have beaten Chelsea and Crystal Palace in their first four league games of the season.

Striker Wayne Rooney will receive the warm welcome he deserves as a Manchester United "legend" when he returns with Everton to Old Trafford, manager Jose Mourinho said on Friday.

Rooney moved back to his boyhood club at the start of the season after 13 successful years at Manchester United.

"I think he'll get the welcome that he deserves," Mourinho told a news conference ahead of Everton's league visit on Sunday.

"Sometimes the word legend comes too easily (but) he's a real legend of the club. The number of appearances, goals, trophies - clearly he's one of the most important players in the history of Manchester United.

"I think the stadium will show him the respect he deserves. I hope before the match and after but not during it."

With Paul Pogba facing a spell on the sidelines with a hamstring injury, Mourinho believes midfielders Ander Herrera, Marouane Fellaini and Michael Carrick can step up to the challenge of replacing him.

"We have players waiting for an opportunity," Mourinho added. "He started the season really well, we've had one match per week we've been going with the same players.

"Honestly, we miss Pogba and we need him but we have good players. Ander Herrera, Marouane Fellaini, Michael Carrick - they're waiting for a chance and they are ready."

Mourinho said left back Luke Shaw is back in contention for a place in the squad after recovering from a long-term foot injury, but defender Marcos Rojo still faces some time out of action due to a knee problem.

United made a flying start to the campaign with three straight victories before being held to a 2-2 draw at Stoke City last weekend.