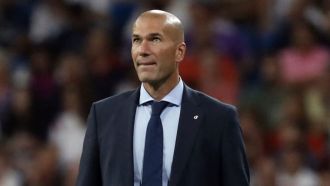 Zidane: Cristiano Ronaldo is always there, he could have scored four

Real Madrid kicked off their Champions League campaign with a 3-0 win over APOEL Nicosia and Zinedine Zidane was very content with how his team played, particularly Cristiano Ronaldo.

The Portuguese played for the first time since the first leg of the Spanish Super Cup against Barcelona, scoring two goals on his return, while Sergio Ramos got Real's third.

"He's the best in the world," Zidane said about Ronaldo to BeIN after the game.

"He's always there, he always scores.

"If he was luckier today, he could have scored four.

"We know the ability that Cristiano has."

Zidane was aware that all the pressure was on Real pre-game, but he is content.

"We are happy," he continued.

"There are no quiet games.

"APOEL have experienced players and are not overwhelmed by the Bernabeu; they just went out and played.

"If you're not focused, they can hurt you."

"Sergio normally scores with his head, but he has the ability to score a bicycle kick on occasion."

Gareth Bale was whistled as he was substituted late on, despite providing two assists, but Zidane has focused more on those fans who appreciated the Welshman's performance.

"I did not listen to the whistles, only the applause," said Zidane.

Upon his arrival in Barcelona, Ernesto Valverde knew that the Catalan club needed to change philosophy in order to reclaim the European and domestic throne. After Neymar's departure, the former Athletic Club coach had to readjust his plans and somehow fill in the boots of the Brazilian superstar.

His team's double defeat against Real Madrid in the Spanish Super Cup was a major blow, but the Blaugrana managed to bounce back with four wins in four games, without conceding a single goal and scoring 12. So, hat has changed over his first months in Catalonia?

Messi plays closer to the area

Valverde has insisted that Messi shouldn't drop back to get the ball and start an attack, placing him in a more unrestrained role which resulted to eight goals in his first six official matches.

Without Neymar, an attacking triangle system isn't necessary anymore and without the ball, Ousmane Dembele drops to the midfield, while Ivan Rakitic joins Sergio Busquets to form a defensive line.

The Catalans can count again on their wing-backs, as Jordi Alba and Nelson Semedo's explosive performances during the first few games have opened up the pitch for Barcelona, while also blocking the opponents' way to Marc-Andre ter Stegen's goal.

Iniesta will be the main man

His place in the starting line-up is undisputed at the moment. Andres Iniesta is the cog that has connected Barcelona's well-oiled machine for years and Valverde seems eager to re-establish him in his favourite midfield position.

Four consecutive games without conceding a goal seem like a message of transformation from the backline. Semedo and Umtiti are slowly adapting to their coach's philosophy and ter Stegen has received a boost on his confidence.

Barcelona players have changed their attitude on the field compared to last season, throwing themselves at the ball and pressuring their opponents with aggressiveness. It looks as if the ambition to recapture all the domestic and international trophies available is on its way back to Camp Nou.

When he started for Porto in their tie against Besiktas on Wednesday night, former Real Madrid goalkeeper Iker Casillas equalled Ryan Giggs' record of playing in 19 consecutive Champions League campaigns.

The 36-year-old first debuted in the competition with Los Blancos on September 15, 1999 against Olympiakos at the tender age of 18, and has since gone on to play in 169 games.

Casillas also holds the record for most Champions League fixtures played in, ahead of Xavi Hernandez on 157 and Giggs on 151.

According to official statistics from UEFA, Casillas has played in 176 games in European competition, which is more than Paolo Maldini on 174 and Xavi on 173, second and third in the rankings.

Klopp: We had answers for everything except the goals

Liverpool manager Jurgen Klopp put a brave face on after watching his side throw away a lead with another poor defensive display in their Champions League encounter with Sevilla at Anfield on Wednesday.

The Premier League side, competing in only their second Champions League group stage in eight years, had plenty of chances to win the game after coming from behind, but defensive lapses -- and a penalty miss from Roberto Firmino -- cost them two points as Sevilla salvaged a 2-2 draw.

Klopp, whose side lost 5-0 at Manchester City on Saturday, said he was happy with most of what he saw but rued the two goals conceded.

"It was pretty much a winning performance for 85, 86 minutes, and the team played well against a side who play well," he told BT Sport. "We had answers for everything apart from the goals.

"It is a draw, it does not feel too good but I am fine with big parts of the performance."

The German also denied playing a part in the sending-off of Sevilla coach Eduardo Berizzo.

"The coach was no problem, but I do not think I had any decision on the referee. I did not ask for it," Klopp said.

"The people on their bench thought I was responsible for his red card and did not like me too much."

Captain Jordan Henderson defended Firmino, who had scored Liverpool's equaliser in the 21st minute before striking a post with a penalty just before halftime.

"Roberto Firmino has scored penalties for us before," he told the broadcaster. "Players will always miss penalties.

"We had plenty more chances to score, so we need to be more ruthless and go three or four up. That is football and we have got done."

Berizzo said Firmino's penalty miss had given his side hope.

"Liverpool missing that penalty helped put us back in the game, (Pablo) Sarabia coming on helped us hold the ball and we played with much more order in the second half," he told reporters.

"Even though we went ahead in the first half, it was really hard to contain their pace, especially wide."

Atletico will debut at the Wanda Metropolitano on Thursday

The first stop of a historic week for Atletico Madrid, that will culminate on Saturday with the game against Malaga at 20.45 CET, will begin in earnest on Thursday when the first team train at the Estadio Wanda Metropolitano for the very first time.

It will be behind closed doors and after 20.00 CET, Diego Simeone and his team having the opportunity to test the virtues of their new playing surface first hand.

As if to emphasise a homely feel, the measurements of the pitch are exactly the same as those which were used at the Estadio Vicente Calderon and on Wednesday, the goals were being put into place ready to welcome a new era for the Rojiblancos.