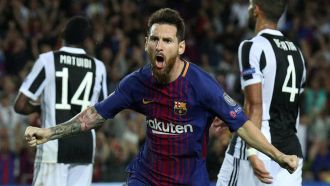 He has overcome many challenges and broken many statistics throughout his career, and one more that Lionel Messi can now chalk off is that he has finally beaten Gianluigi Buffon - after 315 minutes and almost four matches.

The striker could not score against the Italian in the final of the Champions League in Berlin which ended with a Barcelona victory (3-1).

Nor was he able to find the net in the two games against Juventus last season.

On Wednesday night he scored in the 45th minute, after a superb one-two with Luis Suarez.

Messi already has seven goals this season: one in the first leg of the Spanish Super Cup, five in the league and one in the Champions League.

It was a bad night for Gonzalo Higuain at the Camp Nou, and after his 12th visit without finding the net, he showed his middle finger to the baying Barcelona supporters.

Twice now he's failed to score with Juventus, adding to the 10 games he was goalless with Real Madrid.

In the 87th minute, Massimilliano Allegri decided to replace him with Caligara and it was as he walked towards the bench that he made the offensive gesture.

The Argentinian has scored just three goals, all at the Estadio Santiago Bernabeu, against Barcelona in 21 appearances.

Allegri: If you give Messi space, he is unstoppable

Conceding too much time and space to Lionel Messi was Juventus' undoing against Barcelona, according to coach Massimiliano Allegri.

The Argentine ended his barren run against Gianluigi Buffon by scoring with two well-taken goals.

Another from Ivan Rakitic helped Ernesto Valverde's men to a 3-0 victory and Allegri attempted to explain his side's problems afterwards.

"Barcelona are a team that can play games like that very well," said the Italian.

"In the first half, I thought we dealt with Messi and [Andres] Iniesta quite well but not so much in the second half.

"Messi made the difference and [Paulo] Dybala did not. He had three shots on goal, scored twice and also hit the post once. He's unstoppable when he has space.

"What this result does is make us understand that if you play in the Champions League against teams of that level and don't keep your concentration then you pay for it.

"We must grow and be more focused and solid at the mental level. We lost our concentration."

Marco Asensio is out of the APOEL game

Real Madrid have announced their squad list for Wednesday's match against APOEL (20.45CET), and the big news is the absence of Marco Asensio.

Vallejo, Achraf, Marcos Llorente and the injured Karim Benzema are also left out.

Of the 19 chosen by Zinedine Zidane, Varane, Modric, Casemiro, Keylor Navas and Cristiano Ronaldo all return.

Zidane: Maybe Real Madrid are lacking another No.9, but we couldn't sign one

Real Madrid have already dropped four points this LaLiga season and one of the concerns with their play has been the number of chances that have been missed, while Karim Benzema's injury is yet another problem.

All of this has led some to wonder if it was wise to let Alvaro Morata and Mariano leave in the summer and Zinedine Zidane addressed the issue on Tuesday, explaining that he too would have liked to have another striker in his squad, but that it wasn't possible.

"It's true that when you look at the players you had, like [Alvaro] Morata and Mariano, and when you see that now you only have [Borja] Mayoral that you might think we lack a No.9," he said in the pre-match press conference for Wednesday's clash with Apoel Nicosia.

"That might be the case, but it wasn't possible [to bring in another].

"I would have liked Morata to stay, but he wanted to play more and to leave.

"It wasn't possible to sign another player, but I really believe in Mayoral, as he is hungry.

"We also have Karim [Benzema] and Gareth [Bale].

"We will get by with all of the players that we have."

As for Zidane's willingness to rotate, he insisted that he would continue to do so, even if a rotated side dropped points to Levante last weekend.

"With this squad, we can do a lot of things," he said.

"I am interested in my players and what goes on externally will not change what I want to do."

The loss of four points was also explicitly addressed, but Zidane pointed to the series of draws suffered last September, while he also looked ahead to this fresh start in the Champions League.

"We're not pleased with these results, but this is football.

"We won't change the way we work and tomorrow we'll try to play better and to win the match.

"We are [European] champions, but it all starts from zero once again."

That match against Apoel Nicosia kicks off at 20:45 CET on Wednesday night, at the Estadio Santiago Bernabeu.

Simeone: Atleti didn't score but I leave with a good feeling

Though Atletico Madrid could only manage a goalless draw against Roma, Diego Simeone appeared satisfied after the match.

The Rojiblancos had chances to win the game but couldn't take them.

"You have seen a team that believed in itself, in everything we had prepared," Cholo said to reporters.

"We just missed scoring a goal, which is the most important thing in football.

"We've had great chances with Vietto, Koke, Saul... but their goalkeeper had a great game."

But for Roma's custodian Alisson, the scoreline could've been more favourable for the Spaniards.

"You have to keep trying [to score]," Simeone continued.

"We deserved to score, and would have if not for their keeper."

A point is better than none and the Atleti coach wanted to accentuate the positives.

"We did what we were going to do," he noted.

"There was good collective work, intensity, pressure... it was everything as we imagined, less the goal.

"We are growing, improving, at a slow pace but on the right track."

Jose Mourinho set the Champions League bar high for his Manchester United team after criticising them for trying to play "fantasy football" in a 3-0 win over Basel on Tuesday.

Marouane Fellaini, Romelu Lukaku and Marcus Rashford all scored their first Champions League goals as United eased past the Swiss side at Old Trafford.

Mourinho, bidding to win the competition for a third time having taken Porto and Inter Milan all the way, accused his side of switching off after Lukaku's goal put them 2-0 ahead shortly after the interval, having dominated the first half.

"Three points are important when you start the group phase at home," Mourinho, who took United to the Europa League title last season in his first campaign in charge, told BT Sport.

"Until 2-0 we were very stable, with confidence and patience, with good choices, played quite well.

"After that everything changed. We stopped to think, we stopped playing simple, we stopped making the right decisions on the pitch and we could have put ourselves in trouble

"But they didn't score. We tried to play fantasy football, tricks, and when you stop to play seriously I don't like it. You gamble a bit. Maybe they felt the game was under control. But football is football, you have to respect opponents."

Basel did have some chances but never really threatened to punish United for some sloppy second-half passing.

Mourinho, however, will know that those kind of mistakes will be punished by sides with more bite than the Swiss.

Mourinho's other concern was a hamstring injury that forced Paul Pogba, United's skipper, off midway through the first half.

Pogba would miss the weekend Premier League match against Everton, Mourinho confirmed, but said in Fellaini, who replaced Pogba, he has an ideal stand-in.

"I keep saying the same, Fellaini is a player with special qualities he does things that other players cannot do. He gives me a multiple area of actions and positions and philosophy on the pitch and is one of my most important players."

Mourinho was pleased to welcome back wing back Ashley Young who provided the cross for Fellaini's opener on his first match since injuring himself in the Europa League semi-final, second leg against Celta Vigo in May.