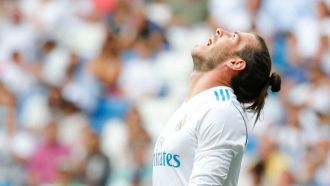 A draw with Levante saw two more points dropped in LaLiga but of more importance for Real Madrid is that they now face an attacking crisis.

Cristiano Ronaldo's continued suspension is an obvious issue but one Los Blancos could plan for, Karim Benzema's injury on Saturday makes such planning all the more difficult.

Just as was the case against Valencia before the international break, the ball simply wouldn't go in for Los Blancos.

In Benzema and Ronaldo's respective absences, Gareth Bale will be entrusted with the task of leading the line for the club in the coming matches.

His support players will be Marco Asensio, Isco and Lucas Vazquez with there being absolutely no room for rotation by Zidane.

It's easy to look at things with hindsight but these are roles that would have been taken up by Alvaro Morata and James Rodriguez last term.

Creating chances hasn't been an issue with 18 shots peppered against Levante's goal and 22 being fired in the direction of Valencia's before the international break.

The issue has been putting the ball into the net with just three of Los Blancos' 40 shots this term being converted.

On Wednesday, the Champions League returns and Ronaldo returns with it, albeit he will miss Sunday's trip to the Estadio Anoeta.

Zidane faces some difficult decisions with regards to his team selection, but it is clear that Real Madrid need to find a way to put their attacking woes behind them, and quickly.

Valverde: It doesn't mean anything but being ahead of Madrid is always good

After a convincing victory over neighbours Espanyol, Barcelona coach Ernesto Valverde was satisfied and happy to be above Real Madrid at such an early stage, even if it doesn't mean too much in the grand scheme of things.

"We are at the beginning of the season and the distances are not significant but it is better to be ahead than behind," Valverde said to the press after the game.

"It does not mean anything, but being ahead is always good."

"Semedo is a strong, fast player who plays well in attack and defensively he will help us a lot," he continued.

"He has needed an adaptation process, but he gets better every day."

Messi was the star of the show and Valverde sat back and enjoyed seeing his No.10 doing what he does best.

"I'm happy for Leo who scored three goals and is extraordinary," he noted.

Ousmane Dembele made his debut and capped it with a classy assist to Luis Suarez.

"The idea is to give Dembele minutes, we have a lot of hopes for him and this game was a first step," he said.

"His teammates know that he has real quality."

Shouts of federation corruption at Bernabeu with fans angry at refereeing

The Bernabeu crowd was left angry with the refereeing of Hernandez Hernandez with chants of "corruption at the federation" after Marcelo's dismissal and it comes on the back of club president Florentino Perez's own criticism of the overall standard from officials.

The frustration from fans grew as the game went on and there were first whistles after a penalty claim by Theo Hernandez was turned down.

Then after the break Carvajal was yellow carded after a foul was not given on Theo while Levante's time wasted went unpunished from the referee.

Finally the decision to allow only four minutes at the end did not reflect the time wasting and the referee was subject to considerable whistling at the end.

Zidane: We have to play better

Real Madrid coach Zinedine Zidane gave a frank assessment of his side after the 1-1 draw with Levante and admitted they had to do better.

Lucas Vazquez equalised after Levante went ahead and Marcelo was sent off late on.

"We cannot be happy with the game, now we are four points off the pace and we have to be worried," said Zidane.

"We need to find some solutions. We lacked a lot today in the game. The start is very important and we did not start well today.

"We faced a team that defended deeply and in these situations you have to show more. You need to score first but it was they who went ahead and that is what annoyed me most.

"However, we cannot go crazy and now we need to look ahead to the next game.

"It is not a physical problem as we showed in that we were better after the break. The problem was that we did not find ways to score."

He says that he will continue with his policy of rotations.

"I will not change this. After one bad game we cannot lose the plot and this is something I believe in," he said.

"This is the side that we have and we need to find solutions within the squad. Cristiano and Benzema were not there and we could not change that."

Sadio Mane's red card in the first half of Liverpool's 5-0 defeat by Manchester City on Saturday divided observers and pundits even from the same family, with former Manchester United defenders Gary and Phil Neville disagreeing.

Mane caught City goalkeeper Ederson on the jaw with a high foot as he chased a through ball.

Gary Neville, who was in the commentary box for Sky Sports immediately criticised the referee. "Jon Moss, you have just ruined the game there. He didn't need to give a red card. He could have given a yellow.

"I think he's got it wrong. His eyes are on the ball, it's ridiculous. He wins that challenge, the goal is there for him."

"Red card has spoilt this game -- but that's not Jon Moss fault -- his position was fantastic to see the challenge and show red card," he added later.

"He had his eyes on the ball but that doesn't mean he isn't endangering his opponent," the former Liverpool defender said, referring to the law which reads "a tackle or challenge that endangers the safety of an opponent... must be sanctioned as serious foul play."

Unsurprisingly, Liverpool manager Juergen Klopp was aggrieved by the decision.

"(The foot) was not that high," he said. "The goalie came more in his (Mane's) direction. In my opinion it was not a red card."

Klopp appeared to attract some sympathy from City manager Pep Guardiola, whose team suffered from red cards to Kyle Walker and Raheem Sterling in their previous two games.

"Mane didn't see him, he was looking at the ball but the impact was huge," Guardiola said.

"I didn't speak about the decision when we had Kyle Walker sent off so I will not now."

Senegal international Mane faces a three-match suspension from domestic games, although he will be available for Liverpool's Champions League tie at home to Sevilla on Wednesday.

Guardiola: We are lucky to have De Bruyne

Manchester City manager Pep Guardiola said his club were lucky to have midfielder Kevin De Bruyne after the Belgian delivered an outstanding performance in the 5-0 win over Liverpool on Saturday.

"He is a complete player. We are a lucky team, a lucky club to have Kevin with us. This season he is in a good mood, maybe because he is a father. I am so happy with his performances and not just today," Guardiola said.

Although four of City's goals came after Liverpool were reduced to 10 men following the dismissal of Sadio Mane for a foul on City keeper Ederson, there was no doubting the influence De Bruyne had on the game.

With City playing three at the back, two wing-backs and two strikers, it was left to De Bruyne and David Silva to be the creative force in Guardiola's midfield and the Belgian in particular took on the responsibility perfectly.

It was his perfectly weighted through ball that found Sergio Aguero's well-timed run for the opening goal and then De Bruyne created the second with a pinpoint cross from the left which was headed home by Gabriel Jesus.

"With his quality, his commitment, he learns, he is so intelligent. He produces huge assists," said Guardiola when asked about De Bruyne's performance.

"Last season he hit the post 15 or 16 times. He is quick. He sees the spaces on the middle or outside. He is good on balls, on the feet. He is good running, attacking the space."

De Bruyne joined City two years ago when Guardiola made him one of his first signings after watching his impact for Wolfsburg in the Bundesliga when he was in charge of Bayern Munich.

The midfielder previously played in the Premier League for Chelsea but was unable to make any real impression in just three appearances and he was loaned out to Werder Bremen before being sold to Wolfsburg.