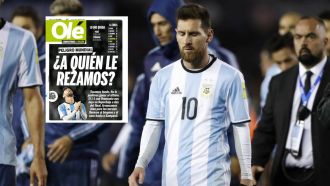 Argentina drew 1-1 with Venezuela and are still not guaranteed a place at the World Cup 2018. "The best can't be just another player" Olé criticised Messi.

Argentina were unable to beat bottom side Venezuela yesterday, stumbling to a 1-1 draw at the Monumental stadium in Buenos Aires, and still haven't booked their place for the World Cup in Russia next summer, and the main target in the firing line was Leo Messi. "The best can't be just another player", fired Olé.

The paper said the player was a reduced version of himself. "The lack of partners who speak something of his language doesn't exempt him from responsibility. Leo played an acceptable first half. He started promisingly, with a number of those touches that make you think he's going to explode. That today's his day, one of those nights that will finish with everyone adoring him. But he didn't explode. If during the footballing dialogue the main actor turns off, then the Argentinean side ends up with a second half that will go down in history as one of the worst in years. The best can't be just another player".

This isn't the first time Messi has been criticised for his performances for his country. In fact the Barcelona striker retired from international footballafter losing the Centenary Copa America to Chile on penalties, with Messi missing a spot kick. The criticism he received from the press was felt to have contributed to his decision.

"For me the national team is over," the heartbroken 29-year-old told reporters. "I've done all I can, I've been in four finals and it hurts not to be a champion. It's a hard moment for me and the team, and it's difficult to say, but it's over with the Argentina team."

However after a break Messi changed his mind and returned to the Argentina side.

The press react to Argentina's draw

Globoesporte (Brazil): "A wine* hangover: Argentina disappoints again, with another draw against Venezuela and continues in difficulties in the qualifaction for the World Cup"

*The Venezuelan side are nicknamed the Vinotinto, the red wine, for their shirts.

A Bola (Portugal): "Messi's Argentina disappoints with a draw against Venezuela"

Mundo Deportivo (Catalonia): "Argentina plays with fire and gets into trouble

Zidane has repaid his transfer fee in prize money

In a year and a half as Real Madrid coach, Zinedine Zidane has earned Los Blancos more money than the club paid for his playing services 16 years ago, when they signed him from Juventus.

Zidane's transfer fee in 2001 equates to one in the region of 75 million euros, while he has now earned the club 109.4m euros in just 18 months as coach.

The income comes directly from the side's triumphs under his guidance, primarily from the Champions League victories, as the Spanish federation does not directly offer financial benefits for success.

During the time the Frenchman was in charge in the 2015/16 Champions League, the club took in 29.5m euros, whereas after a whole European campaign last season the club brought in 54.2m, taking into account their UEFA Super Cup victories and the upcoming money from the Club World Cup.

This season, Zidane could push the earnings up to double the fee that was paid for him.

He has already proven in his coaching career, as he did in his playing days, that he was well worth the money the club spent to sign him from Juventus.

Except for Modric and Kovacic, Real Madrid players won their international matches

With the exceptions of Luka Modric and Mateo Kovacic, Real Madrid internationals have returned to Valdebebas as winners from their World Cup qualifiers.

First and foremost, Isco, who produced a couple of impressive performances, scored three goals in total, against Italy and Lichtenstein.

Meanwhile, Dani Ceballos and Borja Mayoral shone for Spain under-21, leading their team to two consecutive wins against Italy (3-0) and Estonia (2-0).

Los Blancos superstar, Cristiano Ronaldo, assisted his team's efforts by scoring a hat-trick against the Faroe Islands, although he didn't manage a goal in his team's 1-0 win against Hungary.

Gareth Bale, Wales' central character, played in both his national squad's victories against Austria (1-0) and Moldova (2-0).

The worst results were obtained by the Croats, as Modric and Kovacic returned from the break with a win against Kosovo (1-0) and a defeat against Turkey.

Marcelo and Casemiro featured in only one of Brazil's two games, a 2-0 win against Ecuador, and were subsequently rested for the match against Colombia as their national team have already progressed to the World Cup.

Last but not least, Los Blancos academy prodigy, Achraf Hakimi, secured a position in Morocco's starting line-up, serving his team for 90 minutes in both of their two encounters.

The Portuguese tactician insisted that his team acted fast in the transfer window, signing Romelu Lukaku before the Neymar move.

Had it been after, such an acquisition could've cost them several more millions following the 222 million euros spent for the former Barcelona forward.

"If the biggest transfer in history had still been Paul Pogba, I think Philippe Coutinho would now be in Barcelona at 101m.

Being accused several times for continuously changing teams, Mourinho defended himself by stating that he always has a long-term plan for his clubs.

"I think I prepare the clubs so that when I leave, the coach who comes after me is already in a top club and this isn't something you do in the short term."

Despite Barcelona president Josep Maria Bartomeu claiming that an agreement in principle had been reached with captain Andres Iniesta over a new deal, the midfielder has denied that.

The Blaugrana legend's current contract at the Camp Nou is set to expire at the end of the season on June 30, although Bartomeu had insisted that they were nearing a renewal.

Upon returning to Barcelona following his international commitments with Spain, Iniesta bluntly denied that this was the case.

"It is not," he responded, when asked if a deal was close because Bartomeu had announced that the parties had reached an agreement.

This feeds further doubt about Iniesta's Barcelona future after a successful international break for the 2010 World Cup winner, who played 72 minutes against Italy and 90 against Liechtenstein.