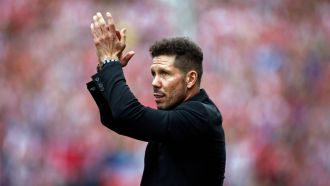 Diego Simeone has agreed a new, three-year deal as head coach of Atlético, the LaLiga club has announced.

Atlético Madrid have announced that head coach Diego Simeone has signed a new contract with the LaLiga club that will run until 30 June 2020.

Simeone's fresh terms see the Argentine add two years to his previous deal with Los Rojiblancos, which had been due to expire in summer 2018.

Since his appointment as boss in 2011, he has led the club to one LaLiga, one Copa del Rey, one Spanish Super Cup, one Europa League and one UEFA Super Cup.

Simeone, who is now in his seventh season in charge, has also steered Atleti to two Champions League finals, in 2014 and 2016.

'El Cholo' was understood to prefer extension until 2019

In a statement published on their website on Tuesday, Los Colchoneros heralded the confirmation of "much-awaited news by the Atlético fans".

The new contract is longer than initially favoured by 'El Cholo', who was previously thought to be planning to extend at the Wanda Metropolitano only until 2019.

Bartomeu: "It was a mistake to trust Neymar's father"

The Barcelona president gave an interview with Spanish daily Sport and also said that Leo Messi's new contract has been signed by his father.

The Catalan side announced an agreement with Messi, their all-time leading goalscorer, in July to extend his stay to 2021 but the Argentine has not yet put pen to paper, prompting fears he might leave at the end of the season when his previous contract expires.

Bartomeu said Messi's father Jorge had signed the contract and the only outstanding matter was to take a photo of Messi doing it himself.

Bartomeu: "Messi's contract is signed and valid from June 30"

"It's all agreed and signed. There are three contracts," said Bartomeu.

"One with the Messi Foundation, which is signed by its president and the player's brother, an image rights contract with Messi signed by his father, who is the administrator of his company, and his employment contract, which his father signed -- he has the power to do so.

"[What remains is] that Leo arrives and we have the official photograph and the protocol of the signature. The contract is signed and it's valid from the month of June, June 30, the same day he got married."

Bartomeu also spoke about Andres Iniesta's new contract, with Barcelona's veteran playmaker on a deal which expires at the end of the season.

"We have the basis of a deal to renew and we hope to seal it in the coming weeks," Bartomeu told Mundo Deportivo.

"The idea is that he has an indefinite contract which renews automatically year on year until he thinks he wants to retire or change."

"Neymar's departure is an opportunity"

Speaking about Neymar, the Barcelona president admitted that the club had erred in placing too much control in the hands of the Brazil forward and his father.

“We made a mistake in trusting too much in Neymar and his father,” Bartomeu said. “Neymar’s departure is an opportunity to return to a collective style of play and to invest in the cantera.”

Bartomeu also claimed that the current squad at Ernesto Valverde’s disposal is an improvement on last season. “We have a better team than last year. We have put together a team to win everything and it is a better one that we had last season.”

The Belgian, who has been linked with a move away from Chelsea for years now, was joking at an event and said he is worth €1 billion in this crazy market.

Eden Hazard appraised his worth at a Nike event recently and said, "they paid 222 million for Neymar? Then I am worth 1 billion" according to Di Marzio.

The Chelsea and Belgium midfielder accepted that he was joking but added, "I don't know how much I am worth. I have to concentrate on my work, on my training and my matches for Chelsea. Every year there are rumors about me changing shirts, but then the facts are what count. And I am always here to give my best."

The Red Devil has been linked with a move away from Chelsea now for the last couple of summers with Real Madrid reportedly interested in eventually working with the attacking midfielder. He won the Premier League Player of the Year two years ago and said at the same event that the English league is the best in the world. Having recovered from ankle surgery, the 26-year-old will be back in Antonio Conte's squad soon and will be looking to revive the form he showed in 2014-15 and last year as Chelsea won the title in the Italian manager's first year at the club.

Paris Saint-Germain boss Unai Emery says an "inaccurate transcription" of his conversation with Ernesto Valverde led to a "false controversy".

Unai Emery says the comments attributed to him over Barcelona's pursuit of Paris Saint-Germain midfielder Marco Verratti are "inaccurate".

Fernández's response came at a press conference called to explain Barça's unsuccessful transfer window, with Verratti among the mooted signings - headlined by Liverpool's Philippe Coutinho - that did not materialise in a summer compounded by Neymar's departure for PSG.

Emery: My conversation with Valverde was misrepresented

However, Emery on Tuesday took to social media to explain that his exchange with Valverde had been incorrectly reproduced in the TV report, leading to what he described as a "false controversy".

"Firstly, Robert and I have a great friendship that goes back to Valencia," he wrote. "Secondly, we talked about Verratti two months ago and everything was made clear.

"This false controversy has arisen because of an inaccurate transcription of my chat with Valverde [...] which wasn't faithful to what I really said [in a conversation] in which we did indeed talk about Verratti, amongst other things.

"So the related reports that have appeared in recent days have no basis in reality."

18-year-old Mbappe moved to PSG last Thursday in a season-long loan deal with a 180 million euro buy-out clause attached, making him the second most expensive player of all time behind new teammate Neymar.

"We (Monaco) could not understand to the very end whether this deal was really possible as UEFA had questions to PSG about their compliance with financial fair-play," Vasilyev told Russian news agency TASS.

"It was a very tough deal," he added. "Initially, we did not want the footballer to strengthen our opponents but I think this deal appears to be the most successful one in the world of football."

UEFA said it would look at whether PSG had violated the financial fair play regulations "in light of its recent transfer activity".

UEFA president Alexsander Ceferin insisted on Monday that "Nobody is above the law".

The Slovenian, speaking to the European Clubs Association in Geneva, added: "UEFA is at your side to ensure that the participants in our competitions are all treated equally.

"Financial fair play is a tremendous success because it has enabled clubs to reduce their losses drastically and adopt an economic model that is viable for the long term. "Nevertheless, UEFA's credibility and that of football rests on us ensuring that the rules that are in force are respected."