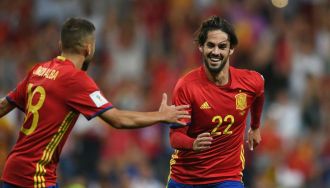 A sensational performance from Isco powered Spain to a decisive 3-0 victory over Italy on Saturday night at the Estadio Santiago Bernabeu in Madrid.

With the win, La Roja take a huge step toward qualifying for the 2018 World Cup in Russia. Spain now lead Group G with 19 points, three ahead of second place Italy.

It was hard to find a bad performance from any of the Spanish players. They were all on-song in what was Spain's best display since the appointment of coach Julen Lopetegui.

In particular though was Isco. Clearly feeling at home on the Bernabeu turf, Real Madrid's star midfielder struck twice before Alvaro Morata capped off the scoring by coming off the bench and tallying a late goal.

Lopetegui rolled out a starting XI lacking a true No. 9, but a strong line-up nonetheless. Only three non-Real Madrid or Barcelona players started; goalkeeper David De Gea, midfielder Koke and forward David Silva. Otherwise, Spain's big two made up the rest of the squad.

One of the biggest questions heading into the match was whether the Bernabeu crowd would heed the wishes of the Spain players and not whistle centre-back Gerard Pique. The answer came within 15 seconds, as the second the Barcelona man was on top of the ball, the jeers and whistles rained down from the stands.

Spain had the better start of the two and thoroughly controlled possession. Italy uncharacteristically were rash in defence, and a foul from Leonardo Bonucci set up a free kick for Isco from right outside the area, and the Real Madrid man swung in a beauty of a right-footer in past the legendary Gianluigi Buffon to give La Roja a 1-0 lead.

De Gea had to be on his toes though when Italy threatened for the first time on the night, as an Andrea Belotti header looked goal-bound, but the Manchester United No. 1 made the reaction save.

While Italy started to work themselves back into the match in attack, Spain were still having chances due to Italy's poor defensive display. It's something hardly ever seen from the Azzurri, but on this night they failed to close down spaces, and Isco was happy to take advantage five minutes before half-time when he capped off a surging run with a left-footed strike that went sizzling past Buffon for a 2-0 Spain lead.

The hosts remained in control in the second half. Only once was De Gea's goal really put into peril when Lorenzo Insigne was on goal early in the second 45 minutes, but De Gea coolly made the necessary stops.

At the other end though, the Isco show continued. He brought the Bernabeu to their feet again midway through the half first by going through the legs of Marco Verratti and then playing a perfect ball out to Dani Carvajal. Sadly, his Real teammate was denied the goal on a fine save from Buffon.

Minutes after coming on for Andres Iniesta, Morata wrapped up the three points by finishing a Spain counterattack at the back post off of Sergio Ramos' cross from the right.

The celebration was on and the Bernabeu nearly was beside itself with joy, as in the final moments the legendary David Villa replaced the exceptional Isco, marking El Guaje's first minutes in a Spain jersey since the 2014 World Cup.

Next up for Spain is a visit to Liechtenstein on Tuesday.

Spain took a major step towards qualification for next summer's World Cup on Saturday as Andres Iniesta paid tribute to the fans in and around the Estadio Santiago Bernabeu during La Roja's 3-0 hammering of Italy.

The result takes Julen Lopetegui's team three points clear at the top of their qualification group and there is a growing sense of hope in the next generation of younger Spanish players currently making their mark on the team's fortunes.

"The atmosphere has been spectacular ever since we arrived on the bus," he told reporters.

David Villa's emotional return to international football after three years away was the obvious headline from the evening and Iniesta, a former teammate of the veteran striker, intimated just how happy he was for his friend.

"I am happy for David," he added. "In this moment it is his to enjoy and the fact is if he is here with the team then it is on merit."

Italy were stunned by just how dominant Spain were over the course of 90 minutes as Isco's ability to drift into pockets of space and dictate play left the Italian midfield bemused.

Of course there were minor faults but the veteran midfielder was quick to praise his team for what they managed to achieve on the night.

"We have played a very complete game both with and without the ball, we have been effective and have earned a victory that vindicated our way of playing," said Iniesta.

Whilst it seems to many that qualification for the Russian showpiece is now nothing more than a formality for La Roja, Iniesta was quick to dismiss such a notion as he called for increased concentration.

"It would be a big mistake to think it is done and we are there, those of us involved know that nothing can be taken for granted until the end," he concluded.

As a club who have earned a reputation for Galactico level spending over the years, Real Madrid have turned into quite the prudent side when it comes to the transfer market.

For the second summer in a row, Los Blancos have made a profit from player movements and it's a period of economic remuneration that is not coming at the expense on the quality of the pitch.

Spending 46.5 million euros on the signatures of Theo Hernandez and Dani Ceballos, with the 45m euro deal for Vinicius Jr to be paid at a later date, Real managed to earn a whopping 126m euros from sales.

Chief among which were Alvaro Morata for 62m euros, Danilo for 30m euros, Diego Llorente for 10m euros, Mariano Diaz for 8m euros, and the loan of James Rodriguez to Bayern Munich for an initial 13m euros.

Real transfer margins over the years

A profit margin of 79.5m euros was unthinkable in the days of massive outlays at Estadio Santiago Bernabeu, as previously the club had almost always spent more than it had made in the window.

For example, Rafa Benitez plundered 85.5m euros into the market before the 2015/16 campaign but only saw returns of 15.65m euros for Asier Illarramendi and Lucas Silva.

The cash pledged in 2009/10 was even greater, forking out for Cristiano Ronaldo, Kaka, Karim Benzema, Raul Albiol and more to lose 169.9m euros.

The man responsible for this change in tack is none other than Zinedine Zidane, who has invested wisely to build the team from promising Spanish players and those previously sent out on loan, keeping his nerve remarkably well when European rivals spend without thought.