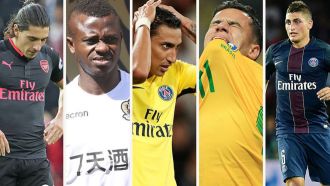 Deadline day failed to produce any dividends for Barcelona as moves for Philippe Coutinho and Angel Di Maria came to nothing.

A deal for the Paris Saint-Germain man looked plausible in the afternoon on Friday but an agreement couldn't be reached with the French club.

Meanwhile, Liverpool still refused to negotiate despite a 160 million euro bid being sent off by Barcelona as the clock ticked down.

Now technical secretary Robert Fernandez and sporting director Albert Soler must face the media on Saturday as the club call a press conference to round off the window.

However, Munir El Haddadi was moved on with Alaves taking the young forward on loan.

Paris St Germain are surprised by UEFA's decision to open an investigation into their recent transfer activity and can demonstrate that they respected Financial Fair Play rules, the Ligue 1 club said on Friday.

"The club is surprised by such a decision, since it constantly kept UEFA's Financial Fair Play teams informed of the impact of all the player transfers carried out this summer despite not being obliged to do so," PSG said in a statement.

f one club managed to shoot themselves in the foot this summer, it was Barcelona.

Perhaps not even just by their transfer dealings, but in the way the club dealt with the pressure. Often telling half-truths and making hopeful claims, the Catalans left themselves high and dry on a number of occasions.

Here we review nine of the silliest quotes to come out of the Camp Nou during the transfer window.

Bartomeu (July 28): "Yes, Messi signed the contract a few days ago but we want to do is stage an event for the new contract, a four-year extension and we will do that after the US tour. We have already arranged an event for before the new season... We have to publicise this new agreement, even though it's already been signed."

Bartomeu (July 7): "He must have a process of maturation, he had to leave and now he has returned. Marlon Santos has been promoted to the first-team."

Bartomeu (July 8): "If Verratti had a clause, we could go for him. There is no formula. If you don't want to sell something... The player has said that he wants to leave but PSG tell him he'll be able to go only when his contract ends."

Bartomeu (July 7): "One will move up into the first-team, we'll confirm it soon but it will be Marlon, who will have a first-team chance for sure."

Perhaps there is a way for Diego Costa to return to the Chelsea fold with the Atletico Madrid target named as part of the Blues' 25-man squad.

Antonio Conte's side failed to add many names to their roster during the transfer window and thus Costa finds himself eligible to play in the Premier League despite remaining in Brazil against the club's wishes.

Elsewhere, Barcelona target Philippe Coutinho is part of Liverpool's registered squad having overcome a back injury in the early weeks of the season amid reports of a transfer request.

With the Azzurrini throwing their weight about throughout the encounter, the Real Madrid man was eventually replaced and taken away from the stadium in Toledo on a stretcher and in a neck brace.

With 78 strikes for Portugal, Ronaldo is now inside the top five on the all-time list and it was special to have made it there by surpassing one of the legends of the game.

"Congratulations to Cristiano Ronaldo for having made in into the top five of international scorers," the Brazilian wrote on social media.

Ronaldo is now in joint-fourth with Iraq's Hussein Said Mohammed and trails the 79 goals of Godfrey Chitalu, the 84 of Ferenc Puskas and the 109 of Ali Daei.

Xavi: Barcelona have signed players who don't fit the system

Deadline day failed to produce any dividends for Barcelona as moves for Philippe Coutinho and Angel Di Maria came to nothing.

A deal for the Paris Saint-Germain man looked plausible in the afternoon on Friday but an agreement couldn't be reached with the French club.

Meanwhile, Liverpool still refused to negotiate despite a 160 million euro bid being sent off by Barcelona as the clock ticked down.

Now technical secretary Robert Fernandez and sporting director Albert Soler must face the media on Saturday as the club call a press conference to round off the window.

However, Munir El Haddadi was moved on with Alaves taking the young forward on loan.

Xavi Hernandez recently sat down with MARCA in Doha and revealed how he has got along with his various national team bosses over the years.

The former Barcelona midfielder also spoke about the direction the Spanish national squad are heading, as well as its past and future.

How is Julen Lopetegui's Spain looking?

"I love and really enjoy watching them play, I don't feel they are any different from our side when I was involved but Julen is promising very good things. There seems to be more pressure applied on the opposition, as well as having a lot of the ball and attacking play, this current generation is very good."

"Marco Asensio is one of the best players that Spain have produced in the last ten years and with the likes of Sergio Ramos, David Silva, Andres Iniesta, Jordi Alba, Sergio Busquets along with Pedro, Thiago, Dani Carvajal, Alvaro Morata and Isco, we have a great team."

Were you surprised by David Villa's call-up?

"No. He deserves it because he did not have a good ending to his international career. When we needed a goal he was always there to score for us. He's very fit and the best striker Spain has had for years. Lopetegui may receive some criticism for picking Villa, but I feel it's the right one as he still has the mentality of a 20-year-old."

Does this give a renewal message when it comes to being selected?

"I feel what Julen does is give out a message that whoever is fit and playing, even if it is in Dubai or the MLS, if you're in shape: then you are picked. On the contrary, Diego Costa is training alone whilst Villa is competing well over in the United States."

The Angel Maria Villar case, did it surprise you?

"I know everything that has happened, the deal with all the players has been very good and now we will see what justice does. If there has to be another president of the RFEF, I would like it to be Luis Rubiales as he is prepared and would fit perfectly in the position."

Does it now increase the magnitude of winning both Euros and the World Cup?

"As a footballer, I realised that the difficult thing is not to win but to keep winning. Because you always want to beat the best, and their rivals sense blood. In Brazil, I saw how we were going over the same routine even though we were almost the same team from four years before."

The Chile game marked a before and after in the national team?

"Already in Euro 2012 there were criticisms towards me, I commented before the final that I would like to be more important in the game and I told Vicente Del Bosque that I wanted to leave. But against Italy I had one of the best matches of my career and Vicente asked me to think about it and insisted that I stay. In the World Cup we lost the first game and although I was not the worst, against Chile I was left on the bench. I found this out in the last second of the team talk, an hour and a half before the game and I felt cheated."

"It was a very strong disappointment as he wanted to rest me before we played Australia. Del Bosque is a good-natured person, I have him on a pedestal but he failed me."

What did you learn from Luis Aragones?

"He's the person who made a change in my career, he was important for Barcelona, but not key. From minute one, Luis told me that I was the boss and that his back was on the line if I failed, then he failed. He recognized that he had been wrong to have left me out before and that he would not expose himself, he was a master at group management."

"He would say to me: 'You and ten Japanese, who care for me, that if you are, I am calm. You are not placed in the town hall'."

Your squad's achievements with Spain, are they unrepeatable?

"There has always been a good atmosphere because if there wasn't then we wouldn't have won anything. And I am sure that there also is now."

Despite the rows between Ramos and Gerard Pique?

"Most of the time spent with Spain is just a laugh, At midnight we would gather in Pepe Reina's room to drink milk with croissants, That's what I miss the most."

Do you mind about missing out on the Ballon d'Or?

"No, but the day before they called me and they told me that I won it, my friends organised a trip but when I got there I already realised. So when I came home I found my friends who looked like they were at a wake, it would have been unfair to Iniesta, Iker Casillas, Villa, Puyol, etc, who would have given it to me. It is a shame that there is no Ballon d'Or for a Spaniard of that successful time, as it was won by the best player in history, Lionel Messi."