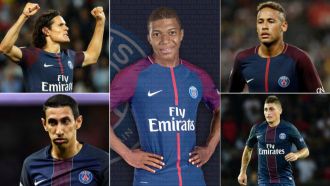 Not only do Paris Saint-Germain have the most expensive trident in the world, but with Kylian Mbappe arriving from Monaco the total cost of their first XI is a whopping 640 million euros.

Pledging 418m euros on just four men in the summer of 2017 (Yuri Berchiche, Dani Alves, Neymar and Mbappe), Les Parisiens have blown away the Russian money that has reinforced domestic rivals Monaco over the past few years.

Neymar's 222m euro capture from Barcelona was admired for its ballsiness as much as it was condemned for its extravagance.

Stealing away one of their European rival's top players was thought of as absurd when the window was opened, and now it's been compounded by the coup of loaning in Mbappe before paying 180m euros for his permanent move next summer.

How much did each player cost?

Only goalkeeper Alphonse Areola and Adrien Rabiot have come through the Ligue 1 side's academy whilst Alves arrived from Juventus on a free transfer.

Alongside the Brazilian in defence are Thiago Silva and Marquinhos, both taken from Serie A for 42m euros and 31.5m euros respectively, as well as 25m euro left-back Layvin Kurzawa.

Since the Qatari cash was plundered into PSG in October 2011, over 1.1 billion euros has been spent on transfers and now sales are the order of the day to avoid Financial Fair Play repercussions.

Whether UEFA can put a cap on this spending, or not, will determine just how far PSG can continue to push the transfer market, because for now they have no limit.

LIVERPOOL ace Philippe Coutinho could still be a Barcelona player after the transfer deadline day shuts in England.

That is because the Spanish transfer window remains open until the clock strikes midnight on Saturday.

Reds boss Jurgen Klopp will be desperate to fast forward time and keep hold of his Brazilian star.

Coutinho has done everything in his power to push through a move to Barcelona including handing in a transfer request and holding showdown talks with Klopp.

But Liverpool have remained firm in their stance that they will not cash in despite receiving a staggering £138million offer.

It appears even a world-record bid would struggle to convince Liverpool to cash in with no time to scout a replacement.

But Barca are likely to test the waters in one final attempt to land their number one transfer target.

Leicester also aren’t out of the woods yet as they try to keep hold of star player Riyad Mahrez.

Chelsea transfer news: Ross Barkley turns down Blues… by changing his mind AFTER the medical

ROSS BARKLEY has rejected the chance to join Chelsea… by changing his mind after the medical.

The wantaway Everton ace looked set to sign on the dotted line after Chelsea had agreed a £35million fee with the Toffees.

But after arriving at Chelsea’s Cobham training ground, Barkley dramatically U-turned on his decision to sign for the Premier League champions, according to Everton owner Farhad Moshiri.

Moshiri told Sky Sports News: “The clubs agreed a deal of £35 million. And I think personal terms were agreed and after the medical we had heard from Paul Martin, Ross Barkley’s agent that the player had changed his mind.

“And he wanted to reconsider his position during the January transfer window. That is the latest we have been advised. He is currently injured so technically he will be with us because he is under contract for another year.

“So I think it is a bit surprising but that is football.”

The 23-year-old will now stay at Ronald Koeman’s side and reconsider his next move during the January transfer window.

CHELSEA have announced the signing of Davide Zappacosta from Torino.

The 25-year-old Italian international has joined the Blues on a four-year contract in a £23million deal.

And the star, who operates as either full-back or wing-back, is delighted to have moved to the champions.

He told ChelseaFC.com: “It is a dream for me to join Chelsea and play in the Premier League.

“I am very excited to be here and start working with the team.

“I hope I can show my quality to the coach, my team-mates and the supporters.”

Blues technical director Michael Emenalo added: “Davide is a player of international calibre who Antonio Conte knows well and we have been aware of for some time.

The countdown contnues for Barcelona who have the uncertainty of not knowing which deals are going to come through before the transfer window closes but what does appear to be practically impossible is a move for Dybala from Juventus.

The Barcelona board looked at Dybala due to the impasse with Liverpool over Coutinho but Juve immediately ruled out a transfer and their plan is to build a side around the Argentine forward. The club's executive director Marotta also said there would be no more moves by the club before the window closes.

It leaves the Catalan club again looking at Coutinho and Angel Di Maria but there have been no positive developments with either player.

Other possibilities are Lemar and Mahrez according to some media reports with the former also linked to Liverpool while the Leicester player has left the Algerian national squad to sort out his future with Chelsea and Tottenham also pursuing him.

Tottenham Hotspur have captured Swansea City forward Fernando Llorente, once again leaving Chelsea out of the mix for one of their targets.

While Wilfried Bony made his return to South Wales on deadline day, former Athletic Club man Llorente was allowed to leave and opted for Mauricio Pochettino's side.

It comes after being linked with Chelsea for some time as ex-Juventus coach Antonio Conte targeted the forward, who notched 15 goals in 32 Premier League outings last campaign.

Lucas Pérez returns to Deportivo on a year-long loan

The Galician club and Arsenal reached an agreement on Thursday evening. Depor will pay a fee of around four million euros for the loan arrangement.

The wait is over for Lucas Pérez who will return to Deportivo after the Galicians reached an agreement with Arsenal this evening. The striker will spend the rest of the season on loan with his hometown club. Depor will pay a fee of around four million euros in the loan arrangement - one year and one day since the player moved to Arsenal in a four-year deal.

It's been an ongoing saga since the middle of June when Arsenal put the 28-year-old on the market. Deportivo stated that they would take the player back in a shot but could not meet the 15 million euro asking price - even after signing a lucrative, five-year sponsorship deal with Abanca. Club president Tino Fernández put in a 12.5 million euro offer only for Arsenal to suddenly change their minds leaving a loan deal the only option open to the Galicians.

Depor faced mounting competition for Pérez with Fenerbahçe, Newcastle, Levante, Valencia, Olympique Lyon and Sevilla attempting to sign him but in the end, the player's determination to return home made the operation possible.