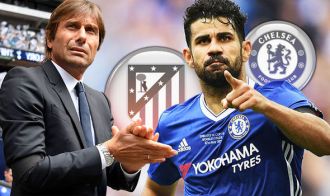 DIEGO COSTA's £49million move to Atletico Madrid has hit a potential snag - because the striker has still not returned to London.

The Spain striker's lawyers were in Madrid on Wednesday along with Chelsea lawyers thrashing out a deal, and with the Spanish transfer window shutting an extra 24 hours later than the English, Atletico are still confident the transfer can be clinched

But what could scupper the move is the fact that Costa owes Chelsea some £600,000 in fines for not returning for duty this summer - and the Stamford Bridge club want him to come back and pay up before a deal can go ahead.

Atletico Sporting Director Andrea Barta has rung Costa to try to persuade him to step on a plane today to smooth the way for the move.

Atletico are set to pay an initial £39m for the stay away striker, with £10m in add ons.

The two clubs were haggling over the details on Wednesday - as Chelsea prepared for what is certain to be a frantic final day of transfer dealing.

One deal that should be completed on deadline day will see Spain striker Fernando Llorente join in a deal worth around £14m from Swansea.

Hazard said: “Michy is now 23. If he wants to move forward, he has to play.

“If we have Llorente, Morata and Michy, it will be difficult.

"He was especially disappointed because he played a good preparation and counted on more.

"But we all know that you’ll be on the bench quickly when you’re not playing.

“As a friend, I recommend him to find a solution to play. But we have to wait for Chelsea to decide on him.

"A season like last year is not good for him and not for the national team. Because for Belgium he can be important.”

Hazard has not played for Chelsea this season after having ankle surgery this summer but could feature for Belgium tonight in their World Cup qualifier against Gibraltar.

MAURICIO POCHETTINO is weighing up a late move for Chelsea-target Fernando Llorente.

The Tottenham boss wants support for Harry Kane and Llorente is among the strikers under consideration.

Premier League champs Chelsea were in pole position to land Swansea’s Spain striker, 32, in a £15million deal but could face late competition.

Kane will lead the line for Poch this season but back-up forward Vincent Janssen has struggled to adapt to English football.

Llorente is recovering from a broken arm suffered on his summer holidays but is back training and impressed last season with 15 Prem goals in his opening campaign.

Chelsea boss Antonio Conte worked with Llorente at Juventus and wants him to provide competition in attack for the Blues as they defend the title.

Swansea have been trying to sign Wilfried Bony from Manchester City to cover for Llorente departing before the transfer deadline.

Meanwhile, Serge Aurier has been given the go-ahead for his £23m switch to Spurs.

In February 2005, David Villa made his debut with the Spanish national team in Almeria.

Elsewhere in the Mediterranean at that time, Mallorca scout Clemente Marin was still rubbing his eyes in disbelief at the young prospect he had discovered a few months previously.

"I've seen a lot of kids play but what I saw wasn't normal," he recalled. "They weren't able to take the ball off him. He had a real gift."

The subject of that memory is, of course, Real Madrid star Marco Asensio.

By October 27, 2013, David Vila had 93 caps and 56 goals for La Roja, more than anyone else in the history of the national side and that same day in Huelva, Jose Luis Oltra gave Asensio his first team debut with Mallorca.

"When I arrived at the club, they told me that I had to see a boy who was the jewel in the crown at youth level," he said.

A game was set up between Asensio's youth team and the first team and it went so well for the youngster that he was told by the senior players that he should remain and train with them.

"The veterans told me he had to stay," Oltra remembered. "He earned his debut on merit so what could I do? I regret not giving him more chances but I also didn't want to wear him down."

Now, in August 2017, Villa has returned to the national team after three years away and Asensio is the new idol of the Estadio Santiago Bernabeu, a breakout star who is the talk of Europe and could be a real threat for Spain against Italy and Gianluigi Buffon.

"I'm not surprised by what he's doing. He's going to get to where he wants to go. He was a boy who did things that I was glimpses of Zidane in," continued the man who discovered him.

"Today, he scores goals like the one against Valencia which the goalkeeper didn't even see. They are like the masterpieces of a painter."

"He is a brutal natural talent," Oltra agreed. "His quality, dribbling, shooting, final pass, change of pace, everything... he is a very good player."

Both men, one who first noticed his talents as a young child and the man who handed him a debut at 17, highlighted two major aspects of his personality: his humility and his family values.

"He's a very simple boy. Very humble. Nobody is gong to give him a big head. No matter where he is, his mother is always with him along with the rest of his family," revealed Marin.

"Maturity," Oltra emphasises is the one word above all others which best describes him. "He's a very mature person. He went through a very hard time with his mother's death but he has a very good environment around him and has a strong head on his shoulders."

Although bot Marin and Oltra are unsure about whether or not he will get a chance against the Azzurri on Saturday, he is undoubtedly in contention.

On Saturday, at his Bernabeu, he will be looking for his first great night at international level but if his career so far has taught us anything, it is that he is ready for any challenge which comes his way.

Zidane the Conqueror: He poses with victims Mourinho, Valverde and Allegri

At a gathering for Europe's top coaches organised by UEFA, Zinedine Zidane posed for a photo with Jose Mourinho, Ernesto Valverde and Massimiliano Allegri, each of whom he has beaten with Real Madrid this calendar year.

Allegri could not get the better of Zidane when Juventus met Real in Cardiff's Champions League final, while Jose Mourinho's Manchester United fell to defeat in the UEFA Super Cup in Skopje.

Los Blancos also proved too strong for Valverde and Barcelona in their two legs against the Catalans in the Supercopa de Espana, asserting their dominance over their domestic rivals to add to their superiority across the continent.

A number of notable figures and familiar faces were in attendance at the Coaches Forum in Nyon along with Real Madrid's Zinedine Zidane.

The meeting, which was prepared by UEFA under the direction of Sir Alex Ferguson, had some of the continent's premier coaching talents in attendance.

Zidane was one of the key figures, given his outstanding trophy haul of seven titles in less than two years as a top flight coach.

Discussion was based around various different aspects of the game that are the subject of debate.

Beforehand, Aleksander Ceferin also wanted to get the firsthand opinion of several ex-professionals such as Clarence Seedorf, Leonardo and Xabi Alonso on topics such as the use of VAR.

Deschamps gives reasons for not calling up Benzema

Karim Benzema will not be called up for France in order to maintain the overall harmony of the group, coach Didier Deschamps has claimed.

Following his involvement in the alleged blackmail of former Les Bleus teammate Mathieu Valbuena, the Real Madrid forward has found himself frozen out of international football.

In an interview with Le Parisien, Deschamps has given his side of the story and explained why Benzema has not made any of his recent squads.

"It certainly wasn't an easy decision for me to make. I defended the player a lot both before and during [the court case] because that seemed like the logical thing to do," he said.

"I did an analysis not on an individual but on the group as a whole. The group has always been above everything else.

"I chose to do this because of what is best for the French national team. I did what is good for the group and it is my decision."

For Deschamps' latest squad for France's upcoming World Cup qualifiers against Netherlands and Luxembourg, Benzema failed to receive a call-up once more, as has been the case ever since the autumn of 2015.