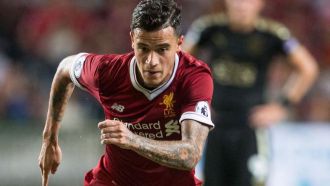 Coutinho told he can move

Barcelona continue to pressure for the signing of Coutinho and the Liverpool midfielder already knows that he will be allowed to move to the Catalan side before the transfer window closes according to Yahoo.

The Merseyside club's owners have told the Brazilian that they will accept his request to leave and Yahoo also claim that Barcelona will pay 160 million euros that will make him their most expensive player, beating the figure splashed out on Dembele.

In the last few hours Liverpool have shown more flexibility and willingness to negotiate than earlier in the summer when they have steadfastly refused to discuss the future of Coutinho.

Cristiano Ronaldo set for No.9 role

After a great deal of analysis on their current situation, Real Madrid's coaching staff are set to play Cristiano Ronaldo in a more central role throughout the course of the season.

Given that Los Blancos failed to bring in a new striker, it has left them with just Karim Benzema, Borja Mayoral and Ronaldo as candidates for their No.9.

A switch to 4-4-2 also looks likely for Zinedine Zidane's side as they aim to consolidate their position as the best team in the world and face up to the massive challenge of winning six titles.

As demonstrated last season and during the summer given their movements in the transfer market, Zidane knows that his current side are more comfortable playing with four midfielders and two forwards as it affords them greater freedom.

It is more suited to Ronaldo's talents than the current 4-3-3 system, despite the fact that he is still a standout performer and prolific scorer.

Ronaldo feels comfortable in that more central role as it allows him to drift out to the left or right and cause problems, as he did against Barcelona at the Camp Nou.

Both Zidane and the former Manchester United star have already spoken about this and their understanding is clear and absolute.

His ideal partner is Karim Benzema, although Ronaldo is aware that he will often be sharing space with Gareth Bale or Marco Asensio and he believes that he has a lot to offer the team in that position.

In the first five games of the season, Los Blancos have taken their successive scoring streak to 70 games, with 12 goals being scored against talented opposition such as Manchester United, Barcelona, Deportivo and Valencia.

However, Ronaldo didn't start in any of those games and has clocked up just 30 minutes of competitive playing time so far this season.

Although Zidane had considered Kylian Mbappe as a big alternative for the future, he was more than happy to put faith in the men who he already has at his disposal.

He viewed that as the better move than adding a potentially combustible element to the dressing room, particularly given what the Frenchman's salary would be.

Despite Zidane's personal view on Mbappe, he was convinced that his signing was simply not worth it due to the risks involved, both for the squad and himself.

There is great strength in the middle of the park for Real with men like Casemiro, Toni Kroos, Luka Modric, Mateo Kovacic, Isco, Dani Ceballos and Marcos Llorente, while also having Lucas Vazquez and Asensio who are capable of filling in in many different positions.

It can be very difficult to find a consensus in the world of football but there is no doubt, across the board, that Marco Asensio is already performing at the highest level.

The Real Madrid youngster isn't just one for the future, he's one for the present and the way he's led the Spanish giants in the early weeks of the 2017/18 season puts him in esteemed company.

Making such an impact on Real at the tender age of 21 hasn't been done very often, with perhaps only Raul, Ramon Grosso and Emilio Butragueno graduating from the academy to cause such a storm.

Typically, Los Blancos' greats have made their name elsewhere at this stage of their career, not least Alfredo Di Stefano who had notched 28 goals for River Plate by the age Asensio reached in January.

In the current team, Cristiano Ronaldo was on the way to winning his first Premier League player of the year award when just 21 in 2006/07. Around the same time, a whippersnapper striker by the name of Karim Benzema was setting Ligue 1 alight at Lyon.

Other examples can be found in LaLiga; iconic forward Juanito flourished at a young age with Burgos and Manuel Velazquez started out at Malaga before joining the Madrid ranks.

As for Asensio, the fact he's been able to develop at Real comes after Zinedine Zidane's insistence that there was space for the Spaniard following a loan spell at Espanyol.

Rejecting a number of offers to take the winger on loan, the Madrid boss ensured that there was plenty of time for the starlet to settle in and it has paid dividends even if it feels as though Asensio has been a big game performer since day one of his Blancos career.

Rummenigge: Real Madrid are ahead of everyone else

Bayern Munich's Karl-Heinz Rummenigge believes that Real Madrid are a level above the rest of the competition.

Real have won three of the last four Champions Leagues and last season became the first team to defend the trophy. They will be favourites again in this year's competition.

"I would say that Real Madrid are the brightest star in the sky," Rummenigge said to Sport Bild.

"There is a consensus that Real are above all the rest.

"Barcelona, Bayern and Manchester United are some way behind."

Rummenigge also acknowledged that while the transfer market remained in its current state, it would not be easy for the Bavarians to return to the top of the European game.

"There are ten teams in Europe that are pursuing the same goal," he said.

"But in this irrational world that football has become it will not be easy."

Bonucci: Sergio Ramos is the best defender in the world

Milan centre-half Leonardo Bonucci says that his rival Sergio Ramos, when Italy face Spain on Saturday, is the best defender in the world.

"He is the best in the world and won the Champions League prize," Bonucci told a press conference..

"Tackles are thanks to the work of the whole back line but there is a certain science involved."

The two teams go head to head as they battle for qualification for the World Cup next year.

"We have a team that can cause Spain problems and we will do our best to get the victory even though we know it won't be easy," said Bonucci.

"Italy have confidence because the future is home grown. There has been a generational change with young players who have a lot of quality.

"I hope to be part of this change and stay for several years more wearing the blue shirt. Rugani, Caldara and Romagnoli are good and there is also the trickiness from Romana Cagliari.

"In midfield there is Pellegrini and Verrati, in attack attack Insigne and Belotti. Overall you can see we are in good shape."

Bonucci had a controversial move from Juventus to Milan this summer but denies there is any ill-feeling with his former teammates.

"Chiellini, Barzagli and Buffon are still friends," he said.

"There may be difivision in the street but there is no problem on a national level. They are champions that have helped me to grow as a player."

Xavi Hernandez is certainly not short of a penny after a sparking football career with a Barcelona side that won all before them but now he is also a lottery winner in a draw made by Doha Bank.

"Winning the cash prize was an unexpected but welcome surprise," said Xavi who nows plays for Qatari side Al Sadd.

"I had opened my account in Doha Bank on the 5th of December, 2016, as I had taken interest in the Al Dana programme after hearing about how Doha Bank encourages their customers to save money and get a chance to become millionaires as well as the opportunity to win other cash prizes.