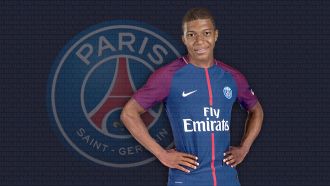 An agreement is reached for Kylian Mbappe to sign for PSG

One of the summer's longest-running transfer sagas has reportedly reached its conclusion, with Paris Saint-Germain reaching an agreement with Monaco to sign Kylian Mbappe.

The transfer will be a loan deal with a purchase clause, which is believed to be obligatory and valued at 180 million euros, plus add-ons.

That's according to L'Equipe, who are reporting that PSG's second blockbuster signing of the summer is done, just three and a half weeks after Neymar's hiring.

MARCA already announced on August 10 that the 18-year-old's future was to be at the Parc des Princes, after the French club offered the player 15m euros, a salary the other principal suitor Real Madrid - who had reached an agreement with Monaco, the player and his father - could not match.

For PSG chief Nasser Al-Khelaifi, he has a periodof three years to make this deal work with Financial Fair Play.

Zidane not angry at Benzema: You can't blame a player for missing chances

Real Madrid were held to a 2-2 draw by Valencia in their first home game of the season, but Zinedine Zidane was still pleased with the performance of his side.

Understandably he was upset not to have taken all three points, but the Frenchman looked to the positives.

"I can't be happy with the result because we played an excellent game and deserved more," he said.

"But you cannot always win.

"I am very proud of my players and that is most important.

"We only lacked finishing.

"We had seven or eight clear chances and did not score, so the game was there [to be won].

"We need to continue like this and think about the next game."

That next game will be against Levante and will come after the international break, in front of a home crowd which was not fully content on Sunday night.

Zidane was asked about the whistles of some Bernabeu-goers, but was not concerned.

"The crowd helped us and they can do what they want," Zidane said.

"What happened with [the jeering of Karim Benzema] is not a problem."

Before the press conference, the coach had talked to Movistar Plus television and had been asked how he'd welcome Benzema, who missed a number of chances.

"With a smile," Zidane responded.

"I'll tell him to keep working.

"The most difficult thing is to have chances to score.

"He didn't score, but has worked a lot and you can't blame a player for missing chances."

Asked about Marco Asensio, who scored both goals, he was pleased, but didn't overly praise him, just as he didn't overly criticise anyone else, pointing to "the work of the whole team".

The Bernabeu crowd were furious with referee Fernandez Borbalan

As is normal when things aren't going the way of the home team, tensions at the Estadio Santiago Bernabeu were raised and the crowd showed their fury at referee Fernandez Borbalan.

Several decisions had seemed to go against the hosts on Sunday evening, including a failure to book a Valencia player for a foul on Toni Kroos early on in the match.

The fury of the crowd was illustrated perfectly by the repeated chants of "get out, get out" in the direction of the official.

His entire performance was criticised by the home crowd, with several decisions that were fairly even thought to have gone in the favour of Valencia.

Zinedine Zidane handed Marco Asensio a start in Real Madrid's Sunday night clash with Valencia and the 21-year-old paid his coach back with a goal 10 minutes into the encounter and with the second-half equaliser.

As he did in both legs of the Supercopa de Espana triumph against Barcelona, he was once again able to score from outside the box, taking his tally for the 2017/18 season to three.

He then curled in a free-kick in the 83rd minute to earn Los Blancos a point and to grab his fourth goal of the campaign.

That makes him the early leader in Los Blancos' scoring charts, ahead of Casemiro - who, like Asensio, had scored twice before Sunday night's action.

Colombia can make a big step towards sealing their place at the 2018 World Cup in the coming fortnight but James Rodriguez is only being allowed a limited role in the international break.

Returning from a thigh injury, the midfielder has been officially barred from facing Venezuela on August 31 by hs club Bayern Munich.

"The Colombian FA has called up James Rodriguez for the World Cup qualifiers against Venezuela on 31 August and Brazil on 5 September," read a Bayern statement on the club website.

"[James] will travel to South America in accordance with the FIFA regulations.

"However, the 26-year-old will not be available for selection in the first match, as an examination by FCB club medic Dr Volker Braun revealed.

"This has been agreed with the Colombia international. It remains to be seen if James will be available for the second match, the decision will be made after consultation with Dr Volker Braun and the Colombian national team doctor."

Sitting in second place in the CONMEBOL qualification table, just four games remain as Colombia look to hold onto their two point advantage over fifth-placed Argentina.

Fans can respond in many ways to a star player leaving their club; exchanging their old shirts at the club shop or even burning them, but Borussia Dortmund supporters have shown their sense of humour amid Ousmane Dembele's exit.

With the winger to be unveiled at Barcelona on Monday, the Bundesliga club fans were quick to fix up their now redundant jerseys, one of which simply counted the amount BVB had recouped for the Frenchman.

Another read 'who the f**k is...' above Dembele's name as Dortmund show that their former idol is gone and very much forgotten at Signal Iduna Park.

With just days to go until the transfer window closes the eagerly anticipated domino effect looks set to begin on Monday with Stevan Jovetic very close to joining Monaco from Inter.

Sevilla had retained hope that the Montenegrin forward would rejoin the club following his successful loan spell in the 2016/17 season but the widely reported rapid progress in the deal taking Kylian Mbappe to Paris Saint-Germain has forced the principality club into action.

Jovetic has been surplus to requirements with the Italian club for a while and Luciano Spalletti's arrival has done little to change that.

Monaco are expected to close the signing of the 27-year-old on Monday with only a medical and the ironing out of minor details left to sort.

Monaco plan to use Jovetic alongside Radamel Falcao once Mbappe leaves for the capital and it is a rather prude fiscal decision as well with the former Fiorentina star only expected to cost 11 million euros.

The move hasn't caught the Andalusian team cold however with their search to recruit a forward continuing as the transfer window nears its close.

A loan signing is now highly likely although, with Eduardo Berizzo having specifically requested Jovetic earlier in the summer, it will be a battle to find an available player who fits into the same profile.