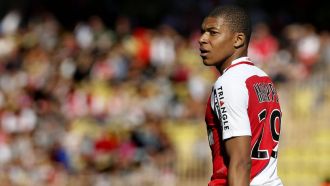 Mbappé to join Neymar at PSG in the next few days

According to Le Parisien, the 18-year-old will leave Monaco for his home city as Paris Saint-Germain continue to spend big in the transfer market.

Kylian Mbappé will sign for Paris Saint-Germain within the next few days, according to Le Parisien.

Mbappé to join Neymar at PSG

The French publication stated on Wednesday evening that the young jewel of French football will move north from Monaco, to the city of his birth, for €150m. In addition to that fee, an unnamed player will move in the opposite direction, from PSG to Monaco.

PSG have already parted with a world-record €222m fee this summer to bring Neymar to the banks of the Seine from Barcelona. The club intend to sell fringe players in order to adhere to Financial Fair Play and, according to Le Parisien, Aurier, Ben Arfa, Krychowiak, Guedes, Lucas, Draxler, and Di María are among those who may have to find a new club before the end of the transfer window.

Mbappé has drawn admiring glances from the Europe's most illustrious clubs, after he burst on to the scene for Monaco last season. The 18-year-old scored 15 goals in 29 Ligue 1 games as Leonardo Jardim's team swaggered to the title.

Real Madrid, Barcelona, and Manchester City are among the clubs to have shown interest. But it appears that PSG will win the race for the most sought-after player in Europe, and secure another symbolic victory for the club's Qatari backers.

Last month, Barcelona's president confirmed twice that Messi had signed a four-year contract extension and that the club was preparing a presentation.

Barcelona admitted a few days ago that Leo Messi has yet to sign the contract which will keep him at the club until June 2021. That admission leaves club president Josep Maria Bartomeu in a spot of bother as last month he announced that the contract extension had been agreed and signed by the player. On 28 July, Bartomeu spoke to ESPN as a guest on the programme: Jorge Ramos y su Banda. During that interview, Bartomeu publicly announced that the club was planning a special presentation event to celebrate Messi's four-year contract extension and confirmed twice that the player had already signed his new contract. "Yes, Messi signed the contract a few days ago but we want to do is stage an event for the new contract, a four-year extension and we will do that after the US tour. We have already arranged an event for before the new season… We have to publicize this new agreement, even though it's already been signed".

Bartomeu's words went unnoticed while the media's focus was on Neymar's possible move to PSG. But now they have resurfaced, and leave the Barça president with more explaining to do...

Luca becomes the third Zidane to play at the Bernabeu

After his father Zinedine and his brother Enzo, Luca Zidane became the third member of the French family to pull on a Real Madrid shirt in the Estadio Santiago Bernabeu with the first team.

The young goalkeeper, who will be part of the squad as its third goalkeeper, came on in the second half of the Santiago Bernabeu Trophy against Fiorentina for Kiko Castilla.

Seri's agent: PSG asked Nice for my client three days ago so they could f**k Barcelona

It's now known that Jean Michael Seri will not be a Barcelona player, but one of the reasons why that is not the case may come as a shock after the player's agent suggested Paris Saint-Germain were involved.

Franklin Mala was negotiating for his client when it appears the Parisians put a spoke in the deal.

"It was possible to reach an agreement as Barcelona and Nice were negotiating," he said to RAC1.

"On Tuesday, they were in France, talking about technical aspects but they already knew Seri's capabilities.

"PSG called Nice three days ago about my client, to f**k Barcelona."

Tottenham confirm Sanchez signing as their summer spending heats up

Sanchez's move to the Premier League club was originally announced last Friday and Tottenham have now rubber-stamped the paperwork after he completed a medial.

The 21-year-old Colombia centre-back has agreed a six-year contract and his move is believed to have eclipsed Tottenham's previous record fee of £30 million, which they paid Newcastle for midfielder Moussa Sissoko last year.

PSG continue to shop as they look to Pepe Reina

Unai Emery's side have offered close to €7 million for the Napoli goalkeeper with a wage of almost €4 million as PSG look to increase their transfer window spending again.

In an effort to cap off an unforgettable transfer window, PSG have their eyes on a Spanish goalkeeper. Pepe Reina is the final objective of the Parisien club as they prepare an offer for the Napoli man.

The transfer, if it happens, would be in the region of €7 million and the 34-year-old would be offered a two-year deal with the option for a third. His wage would be around the €4 million net per year mark and the two year deal is something that could prove pivotal considering his current deal with the Italian club expires in 2018 and given his age. He turns 35 at the end of August.

The player, who is unsure of his future at Napoli would accept a deal at PSG but an agreement is yet to be reached between the two clubs. The Serie A side he currently plies his trade with were unwilling to sell him but unwilling to offer him a new contract either reportedly. He also received a call from Manchester City's Pep Guardiola this summer too. Given his good relationship with his teammates and his influence in the dressing room, he wanted to play in the Champions League playoff against Nice, which Napoli won, but he now feels it is time to negotiate his departure.

Reina's departure would leave Jean Sarri in the lurch but he might push the board to sign one of the names on his wanted list, which includes Real Sociedad's Gerónimo Rulli.

Milan have bought a brand new XI for 207m euros

There has been a summer revolution at the Stadio Giuseppe Meazza this year, AC Milan freely spending with the aim of competing at the top of the Serie A table again.

With the arrival of Nikola Kalinic from Fiorentina, 207 million euros has been taken from club coffers on an entirely new starting XI to the one that ended the 2016/17 season.

Although Gianluigi Donnarumma will remain the club's first choice goalkeeper, his brother Antonio was brought to the San Siro for 1.5 million after Gigio's renewal was finalised.

The engine room in midfield has also had a makeover; Franck Kessie also arrived with Conti on an initial loan with a mandatory option to buy for 28 million after two years.

Lucas Biglia has come in from Lazio for 17m as well as Turkish dead-ball specialist Hakan Calhanoglu for 22m.

Up top, Porto's Andre Silva was the big money signing for 38m, joining Fabio Borini and Kalinic in the red and black shirt.