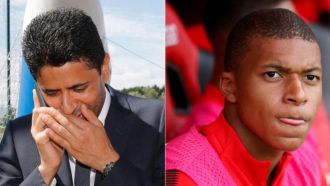 Nasser Al-Khelaifi is beginning to feel pressured by a continent-wide backlash against Paris Saint-Germain's summer spending and is doubting whether to press on with the club's quest to sign Kylian Mbappe.

With 222 million euros already spent on Neymar this summer, Europe's top sides are seriously questioning how the French club can spend close to 500m euros in a single transfer window.

PSG were closing in on the 18-year-old youngster and were even expected to confirm his arrival this week for 180m plus an additional 20m in variables.

However, including other outlays, the deal's total cost was expected to come close to 400m.

Complaints have been fired at PSG's hierarchy, who already know that they are being monitored closely by UEFA with regards to Financial Fair Play rules, leading to the deal slowing down and possibly even falling through.

Mbappe, meanwhile, is left waiting and having been left as a substitute for Monaco at the weekend, he will be hoping his future is resolved as soon as possible.

The player's father thought everything had been resolved and that he would move to the French capital, but Al-Khelaifi has decided to wait, for now, and to see how the coming days unfold before making a decision.

Zidane: Five games is a lot... there is something wrong

The Portuguese striker was sent off for a second yellow card in the first leg against Barcelona, and his ban was extended to five games after a push on the referee as he left the field.

"I am annoyed, we are annoyed," he began.

"I do not want to interfere with referees, but when you look at happened and to think that Cristiano will not play for five games, there is something wrong.

It has been suggested that the club will appeal but the Frenchman was unsure as to the current state of play.

"I don't know the situation," he continued.

"We will wait until the committee meets tomorrow [Wednesday] and then we will see."

Though Real are overwhelming favourites to win the trophy, Zidane remained cautious.

"Everything is possible in football when there is a return leg," he said.

"We will have to play well until the very end because Barcelona had chances in the first leg to win."

Zinedine Zidane's Real Madrid showed in the Supercopa first leg that they are already a well-oiled operating machine, whereas Barcelona are far from the finished product as the new LaLiga season draws closer.

The first leg defeat leaves Barcelona weak, while Real are flexing their muscles and readying themselves for their second trophy of the 2017/18 season after already winning the UEFA Super Cup against Manchester United.

Josep Maria Bartomeu's increasing unpopularity matched with the Sandro Rosell situation, as well as Lionel Messi's exhaustion, do not bode well for the season to come for the Catalans.

The model is in doubt

Playing in the first team is becoming impossible for Barcelona's La Masia graduates, who are now beginning to focus on moving elsewhere to find regular minutes.

Jordi Mboula, Eric Garcia and Alex Grimaldo all thought the best move for their own respective developments was to leave the Camp Nou in search of first team action, with the club instead signing the likes of Arda Turan and Lucas Digne.

The coach and cover

It is August 15 and Ernesto Valverde still does not know his best team - the one he will select regularly in order to compete for titles on all fronts.

Neymar has left for Paris Saint-Germain and the club are yet to fill his void, while Nelson Semedo was signed for 30 million euros only to be left out against Real Madrid with Aleix Vidal starting on the right.

Inigo Martinez was close but the club opted out of a deal, while Paulinho has become their fourth most expensive signing at 40 million, despite the club previously stating that 25m was too much to pay for a player of his ability.

Every decision relating to the first team has almost a dozen people having their say; so many points of view cause conflict and give Valverde an unnecessary headache when it comes to selection

Barcelona have always found it difficult to sign players, as whenever they express an interest that player's price increases overnight.

After selling Neymar for 222 million euros to PSG, every club knows they have money to burn, so are holding out and trying to milk Barcelona for all they can.

Liverpool are demanding over 100m for Philippe Coutinho while Ousmane Dembele could earn Borussia Dortmund close to 150m should he move to the Camp Nou.

If Neymar's exit was ever seen as even a possibility, the club should have identified and targeted replacements before the world knew they had 222 million in their pockets.

The Supercopa Clasico was harmful for reasons beyond their players looking inferior to Real Madrid, but also for the atmosphere at the Camp Nou, which was filled by tourists and even had Real fans occupying areas of the home sections.

With every goal conceded, Barcelona were subjected to huge areas of their own stadium celebrating the joy of their most bitter rivals.

Liverpool survived a missed penalty before teenager Trent Alexander-Arnold and a Havard Nordtveit own goal gave them a 2-1 win at Hoffenheim which put them on the brink of a Champions League group stage place on Tuesday.

The English Premier League side had a let-off when their goalkeeper Simon Mignolet saved a weak Andrej Kramaric penalty in the 12th minute of the playoff first leg tie.

Alexander-Arnold, 18, curled a free kick through a gap in the Hoffenheim wall to put Liverpool ahead in the 35th minute and James Milner's shot was deflected in off Nordtveit in the 74th. Mark Uth pulled a late goal back for the Bundesliga side.

Sporting were held to a 0-0 draw at home by FCSB, formerly Steaua Bucharest, and CSKA Moscow sneaked a late 1-0 win at Young Boys thanks to a Kasim Nuhu own goal in added time.

As a club, Borussia Dortmund have a very clear way of operating, particularly in regard to transfers.

In the case of Ousmane Dembele they have no real need to sell, and their reaction to the player's perceived provocation has been very calm.

The German club have not given in, they have even invited the player to apologise to both his teammates and to their passionate supporters if he wishes to play for them again.

Their position is clear. They want 150 million euros for Dembele, not a penny less, so the next move is Barcelona's.

August 8, 2017, saw the first meeting between Barcelona and Dortmund executives, with the Catalan club outnumbering the Germans 3 to 2 in their delegation.

Dortmund's position remained the same, in that to sell Dembele would be bidding farewell to their season.

Much the same as the rumours surrounding the exit of Pierre-Emerick Aubameyang, the deadline has passed to find a replacement.

This snowballs into the second argument, the German club making clear that the inflation caused by the sale of Neymar, means that clubs will be charging the highest possible fee in negotiations.

Thirdly, even if Dortmund refuse to sell, the final word looks to be with Dembele himself.

The asking price for the attacker is known and if that price is met he will go, however, the sale price was made before Dembele's absence from training, a situation that has wasted time, annoyed Dortmund and potentially lowered his price.

Barcelona have made their offer for Dembele but the German club's valuation of the 20-year old is higher than the that which the Catalan club have offered.

The clubs will continue to talk, but Dortmund have made clear their position that the first offer was inadequate.

The player wants to leave Dortmund, that much is clear, and Barcelona are adamant that they have not pushed the player.

At this stage, the power still remains with the Germans.

They have offered Dembele the chance to apologise and rectify the situation, citing a young man, under contract, that has had his head turned.

The example of Lewandowski

Dortmund believe that Dembele will stay because Barcelona will not pay their asking price.

However, the situation is complicated by the potential for an agreement to allow Dembele to leave if a 'big' offer came his way.

This type of agreement has been common for Dortmund, with Robert Lewandowski a prime example.

The Polish international made it clear that he wanted to leave the club for Bayern Munich.

He was open and honest with Dortmund, and even though it was a transfer to a rival, Dortmund were willing to do a deal.

As long as the situation is approached correctly, they may be willing to do the same with Dembele.