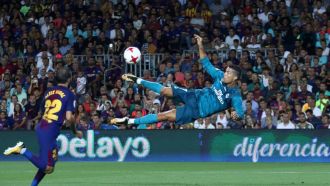 Cristiano Ronaldo copies Messi's celebration by holding up his shirt

Lionel Messi so famously celebrated his winner in April's Clasico by holding up his shirt at the Estadio Santiago Bernabeu and Cristiano Ronaldo decided to mimic his great rival when he netted at the Camp Nou during Sunday evening's Supercopa de Espana first leg.

The Real Madrid forward was booked for his actions and that proved costly when he was shown a second yellow just a couple of minutes later.

Ricardo De Burgos Bengoetxea may have expected to receive a backlash for showing Cristiano Ronaldo a red card in the Supercopa de Espana on Sunday night, but the physical rebuttal displayed by the Real Madrid man may land him on the sidelines for some time.

While the ecstasy was all Los Blancos' in the first leg, the agony was shared as the winger's double yellow card for over exuberant celebrating and diving marred the 3-1 win.

Article 96 of the Spanish FA's rulebook notes how such a push on an official can earn anything from a four game ban to twelve game ban.

What's worse for Ronaldo is that De Burgos Bengoetxea has mentioned the shove in his official match report.

"Once the red card was shown, the player pushed me slightly in a sign of disagreement," he wrote.

Now Real are faced with an agonising wait to see what punishment may be handed down to their star forward.

Zidane: I'm annoyed about Cristiano Ronaldo's dismissal, it was a little harsh

Cristiano Ronaldo stole as many headlines as he could during Sunday night's Supercopa de Espana first leg, scoring after being substituted on and then earning two yellow cards in the space of a couple of minutes, a sending off which frustrated his boss Zinedine Zidane.

The Real Madrid coach lamented the decision and stated that he did not believe his player dived.

"As always, I'm not going to get involved in discussing the work of the referee," the Frenchman told reporters.

"We played a great game, but what annoyed me was Cristiano Ronaldo's dismissal.

"Maybe there's no penalty, but to show a card [for alleged diving] was a little harsh.

"However, we cannot change that, even if we'll try to have him available for Wednesday."

While the coach may not have been happy about going down to 10 men, he was pleased with the way those remaining responded.

"With 10 men we fought and we believed in the victory right to the end," he said.

"This, though, was only one game and now there is the return leg.

"We are happy with the result, but the tie is not decided and we have to play on Wednesday.

"We'll enjoy tonight and then from tomorrow we'll start working towards Wednesday."

"What Asensio did does not surprise me," he said.

"We are happy with him, as we are with everyone.

"There is no A or B team here.

"Everybody works the same and then we have to select a team and make changes.

As well as picking out Asensio for extra praise, Zidane also talked about how pleased he was by Mateo Kovacic and Isco's displays.

As much as Real Madrid captain Sergio Ramos was happy to have defeated Barcelona 3-1 on Sunday night in the first leg of the Supercopa de Espana, the centre-back was upset at some of the refereeing decisions and even wondered if Cristiano Ronaldo's red card could be appealed.

The goalscoring substitute was dismissed when judged to have dived under pressure from Samuel Umtiti and shown a second yellow card, but his captain isn't ruling out having him available for Wednesday's second leg.

"I was far away, but I think it was a piece of play in which [Ronaldo] lost his balance, rather than feigning anything," Ramos said after the match.

"It could be appealed.

"Sending off a key player with 10 minutes remaining of a Clasico in which we've given our all is something which needs to be evaluated and thought about."

While Ramos might not have had the best view of that incident, he was far closer to the other big controversy of the evening, when Luis Suarez won a penalty.

"In no moment was it a penalty," the captain of Los Blancos stated.

"I will need to watch it and evaluate it because I don't think the referee would blow for an action in which there was nothing there, knowing that he could be mistaken.

"My feeling was that it wasn't [a penalty]."

Overall, though, it was an enjoyable evening for Ramos, as he himself explained.

"We are very content because of the great game we played," he said.

"It is an important step, but we cannot puff out our chests yet because there is a return leg and anything could happen.

"It was a match with a lot of effort given, because the opposition is hard to defend against, but we did so well and left them few spaces.

"I am very happy [for Marco Asensio, the third goalscorer] and I congratulate him.

"But there's a need to praise the work of the team in general."

Valverde: I don't think the 3-1 scoreline is reflective of the match

Barcelona were defeated 3-1 at home in the first leg of the Supercopa de Espana on Sunday night, but Ernesto Valverde felt his team had played better than the scoreline suggested.

Pointing to the Blaugrana's missed chances, he insisted that the result could have been different and called for his side to be clinical.

"I don't have the feeling that we were as far away from [Real Madrid] as the scoreboard indicates," he said in his post-match press conference.

"They scored three goals, but this was a game in which we played well and had chances.

"Reaching their danger zones isn't all that matters, as you also need to hit the target.

"I don't believe that we're lacking goalscoring ability, but they were more clinical.

"They caught us in a one-versus-one situation and then scored one wonder goal and then another to make it 3-1.

"It was an even game and they had a strong central midfield, which made playing inside difficult.

"Their second goal really hurt us.

"We congratulate them and we will try to improve for the next match."

Asked about just how difficult it will be to pull off a comeback in the away leg, Valverde admitted that Los Blancos are likely to win the Supercopa title.

"We have a very unfavourable aggregate score and the opponent is the favourite," he said.

"Now we have to play a second leg and things are never over after one defeat, or after one victory.

"When you lose you want another game to come along quickly to try to put things right.

"We are a little bit taken aback, but we have time to recover our energy."

Finally, the former Athletic boss was asked if this meant it was vital to bring in some more summer signings.

"We are Barcelona and we want to have the best team," he asserted.

"We have time [to sign] until August 31, but I want to evaluate what we already have inside the club."

That return leg at the Estadio Santiago Bernabeu kicks off at 23:00 CET on Wednesday night.