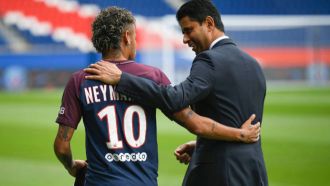 There is concern among the biggest club in Europe including the two rivals for the European Super Cup, Real Madrid and Manchester United who met in Skopje, over the Neymar transfer and they feel that clubs like Paris Saint-Germain and Manchester City provide an unjust rivalry as they use money not made in football.

It is a real worry among the traditionally biggest clubs like Barcelona, Bayern Munich and Juventus, to such an extent that at the end of this transfer window there are plans for a meeting to discuss the situation over the vast sums spent on transfers which is distorting the market.

They believe that UEFA's Financial Fair Play has failed and new methods need to be looked at to regulate the investments made by clubs while all this has happened before it was revealed that Mbappe will be going to PSG.

Real Madrid may feature on his CV, but Angel di Maria could become a Barcelona player during this wild summer transfer window.

With the Catalan club still reeling from Paris Saint-Germain's capture of Neymar, they are looking to bring in fresh attacking talent, with Philippe Coutinho and Ousmane Dembele top of the list, but with Di Maria another option.

The team from the French capital could be open to his sale, given that he has had his issues with coach Unai Emery, given that they need to bring in some money to comply with Financial Fair Play rules and given that he currently has two years left on his four-year deal, making this a profitable time to consider moving him on.

That Lionel Messi would love to work with his international teammate at the Camp Nou is just another reason for the Catalan club to work on the 29-year-old's arrival.

Furthermore, the anti-Barcelona clause inserted into his contract when he departed the Estadio Santiago Bernabeu in 2014 only lasted for three years, so there would now be no need for a fee to be paid to Real Madrid if he signs for their domestic rivals.

However, as much as Barcelona would be interested in the Argentine, the Blaugrana would have to negotiate with PSG for the player they signed from Manchester United in 2015, which could prove difficult given the current state of the relationship between the two institutions.

In response to Liverpool announcing that Philippe Coutinho would not be leaving Anfield this summer, the Brazilian has reportedly issued the club with an official transfer request as he tries to force a move to Barcelona.

Coach Jurgen Klopp has stood firm on the player's position throughout the summer and owners Fenway Sports Group released a statement on Friday morning announcing that Coutinho was not for sale.

Yet Sky Sports are now reporting that a transfer request has been submitted.

It does not force Liverpool to do anything, but now they know exactly what his desires are.

Klopp: In a month it is going to be possible to sign Messi

Liverpool manager Jurgen Klopp says that Neymar's signing for 222 million euros by Paris Saint Germain means that anything can now happen in the transfer market including the sale of Lionel Messi.

"It is clear, before we saw everything as something impossible," he told DAZN.

"There is the buy-out clause list for Barcelona with Leo Messi at 300 million euros and inside a month it looks as though that is something that is possible.

- According to Kicker, the Dortmund directors have not been able to speak to Dembele who is wanted by Barcelona and it is because the player is angry as he was told he could leave if a club makes a good offer.

- Mourinho: Ibrahimovic believes that he can do more and at the highest level and so we are having conversations and discussing the possibility that he plays for us in the second half of the season.

- According to Gazzetta dello Sport, Kondogbia has decided to force the issue and has not trained with Inter as he looks to leave with Valencia one of the clubs following him550.000

- L'Equipe have revealed Mbappe's salary at Paris Saint Germain and it will be the second highest in the squad with 18 million euros during five seasons but it will be some way off 30 million euros that Neymar receives.

- Roma are not going to push any harder for Mahrez and while Monchi wants him he won't break the bank for him and pay more than the 35 million euros offered.

Ronaldo's plan for the Supercopa

Cristiano Ronaldo will use the Supercopa de Espana to fine tune ahead of the start of the LaLiga season and is in a comfortable position aware of his importance to Real Madird while at the same time the team is doing well without him.

The usual anxiety that he has to be involved in everything that is going on has changed to a more measured approach and that can be seen as before he would want to give his all at the Camp Nou where as now he is ready to do well for say 45 minutes with the key match in the return leg.

That is Cristiano's plan for the Supercopa as so far he has played little football, returning for the European Super Cup clash which came on the back of only a few training sessions.

It was not planned that he would play more than 20 minutes against Manchester United and in the end he played 15 minutes in what was a special match for him against his old side and help Real to win the cup. He was at the centre of the celebrations afterwards though which is not something always associated with the Portuguese.

Can Isco join Messi and Ronaldo at football's top table?

Back in 2013, Manchester United thought Isco's head was too big. That's what a scouting report said of the then Malaga playmaker, with the Old Trafford club deciding to make a move. Tuesday's European Super Cup turned out to be a manifestation of their regret, with Isco sparkling as the best player on the pitch. He could be forgiven for having a big head.

Indeed, if ever a demonstration was needed of how central Isco has become to Real Madrid over the past six months or so, it was offered up in his performance in Macedonia earlier in the week. Everything the reigning double European champions did flowed through the 25-year-old. United simply couldn't keep a grip of him, with their defenders unsure whether to step out to meet him and their midfielders uncertain in their efforts to drop back to pick him up.

As a member of the best team in world football, Isco stood out. Of course, this isn't unusual. He really came into his own towards the back end of last season, with Gareth Bale's injury affording him a prolonged run of games in the first team, perhaps for the first time. It was an opportunity he made the most of, becoming the embodiment of Zinedine Zidane's side as they swept to a LaLiga and Champions League double.

That is perhaps the most significant aspect of Isco's rise. While Cristiano Ronaldo might be the current Ballon d'Or holder, holding a claim to be the best football player of all time, it is Isco who best communicates what Zidane wants from his Real Madrid. It wasn't until Isco came into the side as a permanent fixture after the turn of the year that we truly saw his team, until we finally saw his ideas come to fulfilment.

This season could prove to be even more significant for the 25-year-old, though. World football finds itself at a juncture, with the era of Lionel Messi and Ronaldo starting to wind down. Both players are into their thirties now, with their immortality becoming more and more of a factor in their play. It's time for others, including Isco, to make the step up on to their perch.

There's no reason why Isco can't join such company this season. Zidane is now building his Real Madrid side around the playmaker, constructing a system to get the best from him. For so long, everything at the Estadio Santiago Bernabeu has been geared towards Ronaldo. He is still the face of Real Madrid, but from a tactical perspective, that might no longer be the case.

Recently signing a bumper contract extension at the club, Isco has become the image of the new Real Madrid. It took him a while to find his feet at the Bernabeu, even struggling for game time as recently as the early part of last season, but that induction period seems to have served him well. He is steeped in what it means to play for Zidane. Isco, more than anyone else, understands what he wants.

What's more, the time is right for Isco to become the game's next global great. Neymar is close to such a level, but will find himself out of the spotlight somewhat at Paris Saint-Germain (at least for games in Ligue 1). Bale reached similar heights not so long ago, but has lost his way since, and things at Barcelona are too uncertain for Luis Suarez to stake a claim.

The crown is there for Isco to take and his display against Man Utd shows that he might already have one hand on it.