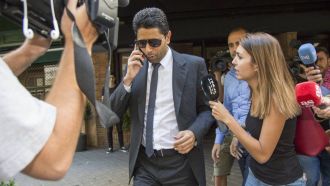 The PSG chief was pictured leaving a restaurant in the city on Thursday, having travelled to the Spanish capital with a number of potential issues to address.

Neymar paperwork problem to be resolved

One is freeing up new signing Neymar to make his debut for the Ligue 1 giants, with former club Barcelona withholding the Brazilian's International Transfer Certificate until they have received his 222-million-euro fee in full.

The Qatari could also be in Spain to negotiate with Atlético Madrid over goalkeeper Jan Oblak, who is being linked with a summer switch to Paris. Al Khelaifi has reportedly arranged a meeting with the Slovenian's agent on Saturday.

However, Atlético are understood to be firmly against the sale of Oblak, particularly after the Court of Arbitration for Sport's decision to uphold their FIFA transfer ban. The 24-year-old's release clause stands at 100 million euros.

Finally, Real Madrid are now being tipped to move for PSG right-back Thomas Meunier - and with the recent arrival of Dani Alves at the Parc des Princes, Al Khelaifi may also be in Madrid for talks over the Belgian.

According to the newspaper, Monaco have not made a deal with PSG for their young star and BeIN also said the same on Twitter.

AS Monaco have rejected reports that an agreement had been reached between them and their Ligue 1 rivals PSG for the transfer of Kylian Mbappé. According to Le Parisien, the French-based newspaper contacted sources at the club and they claim they have not yet received an offer for their star striker.

BeIN Sports, which Nasser Al Khelaifi is the CEO of, also announced on their social media channels on Thursday that the Paris giants had not signed Mbappé.

Following the signing of Neymar from Barcelona for a world record fee, it was reported that their next target was the star of Ligue 1 last season when Monaco swooped to win an unlikely league title. Mbappé scored 15 goals in 29 league fixtures last season and was linked with a move to Real Madrid in recent weeks. That seems to have cooled with Florentino Perez saying there was no room for another striker in the squad.

One thing is clear and that is interest in Mbappé is at an all-time high and has intensified since reports also emerged last week that he had informed his current club that he wanted out although that too has been rejected by the club.

The Germans have rebuffed a Barça offer for Ousmane Dembélé, also linked with Real Madrid, and punished the player for missing training.

Borussia Dortmund say they have rejected a bid from Barcelona for Ousmane Dembélé, who on Thursday failed to show up for training with the Germans.

In a statement, the Bundesliga club said Barça had made an initial, undisclosed offer that "did not match the player's extraordinary footballing abilities."

Barça are keen to sign Dembélé, reportedly valued by Dortmund at 120m-150m euros, as they look to replace Neymar, who joined Paris Saint-Germain for a world-record 222m euros earlier in August.

Dortmund have also revealed that they have suspended Dembélé until after Saturday's DFB Pokal clash at Rielasingen-Arlen after skipping training in an apparent attempt to force through a move.

"Dembélé didn't train today and we don't know why," head coach Peter Bosz said in a press conference. "We've tried to reach him but haven't managed to.

"I spoke to him yesterday. He was in Paris with his friends; he didn't say anything about a possible transfer to another team."

Meanwhile, reports in the Catalan media say that Real Madrid are now plotting to snap up winger Dembélé from underneath their arch rivals' noses.

Zinedine Zidane is a happy man it is easy to see and his success has come down to his method of working and an excellent squad that has been put together which the Frenchman is keen to tinker with as little as possible.

The coach does not want anyone else but he also does not want less and so is not keen on the idea of players leaving like Borja Mayoral or Achraf.

As soon as the Champions League final was over and the trophy raised by Sergio Ramos, Zidane told Florentino Perez that they could do it again if the team was not broken up. At that moment Pepe already was set to leave and James did not have a good relationship with the coach but he did want Morata to stay.

A lot has changed since June 4th but the coach has continued on the same line overcoming crisis over the future of Cristiano Ronaldo and Gareth Bale, and saying that the present squad is ready to repeat its success and build on the six trophies already won as coach.

Zidane continues to think that order and hierarchy are the most important and while he liked Mbappe, the directness of Dembele and the trickery of Dybala, he is happy with what he has. Real have lost 30 goals with the departure of Morata and James but players with a lot of quality are there ready to take their place.

Real are ready to accept that Mbappe will not arrive. Zidane did want to wait for his fellow Frenchman and allow him to come without making creating any great media attention which would have happened if he had stayed another season at Monaco.

At the end of the day, Zidane is showing clearly that he is happy at the club which means most to him and his objective is clear, which is on top of beating Barcelona, to ensure that Bale and Ronaldo are fully focused on what they have to do at Madrid which is something that he is achieving.

Del Bosque: Maybe Barca will be a better team without Neymar you never know

Barcelona could benefit from the departure of Brazilian forward Neymar who could be troublesome, according to former Spain coach Vicente del Bosque.

"A lot of times it is dangerous to battle against the mood swings of players. Barcelona have got rid of a player that could be difficult from time to time,' the coach, who led Spain to success at the 2010 World Cup and the 2012 European Championships told Cadena Ser.

Barca were left fuming at the way Neymar left for Paris Saint-Germain with the French club paying his 222 million euro buy-out clause.

Meanwhile, Del Bosque believes that the present Real side is comparable to the best sides produced in Spain.

"It can be judged alongside Guardiola's Barca, clearly," he said.

"The Champions League and the Super Cup have put them in that category.

"Hard working players have been brought together in the midfield and from there everything begins."

Coutinho: Klopp insists that Liverpool will not sell Brazilian

Barcelona are keen on the Brazilian as a replacement for Neymar, but Jürgen Klopp insists that Liverpool have no plans to sell the flamboyant playmaker.

Liverpool manager Jürgen Klopp said midfielder Philippe Coutinho would not be sold at any price, as British media reported the club had rejected a second bid worth €100m from Barcelona.

Klopp: 'Liverpool do not have to sell players'

Barcelona had already been rebuffed last month in an €80m bid for the 25-year-old, who joined Liverpool from Inter Milan in 2013.

The 24-time Spanish league champions increased the offer to €85m plus €15m in add-ons, but Liverpool have rejected the second bid, maintaining their stance that the player is not for sale, according to the reports.

"Liverpool is not a club that has to sell players. That is set in stone. So what they offer in the end doesn’t matter," Sky Germany quoted Klopp as saying.

"From a financial standpoint, there is no price limit to let him go. No price at which we are ready to give in. Our goal is to have the best possible team. So we want to keep our guys and add new ones. That is our plan."

Barcelona keen on Coutinho and Dembélé

The Merseyside club's position on the Brazil international, who was a key player in Klopp's squad last campaign, is boosted by Coutinho's signing of a new five-year contract last season.