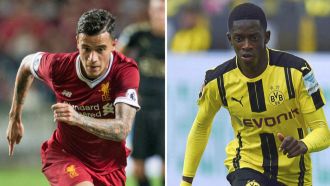 The departure of Neymar has turned the club's supporters against Barcelona's board, so the Catalan club have set eyes on both Philippe Coutinho and Ousmane Dembele in order to pacify the fan base.

Supporters recently expressed their displeasure by whistling at Josep Maria Bartomeu during the Penyes World Congress on Monday.

Blaugrana delegates, Oscar Grau, Raul Sanllehi and Javier Bordas have travelled to England and Germany to secure the acquisition of the Brazilian's replacement, but no agreement has been reached yet.

Unwilling to lose one their greatest prodigies, Dortmund communicated yesterday to Barcelona that the Ousmane Dembele's price is set at 150 million euros.

Coutinho's case, however, is different, with Jurgen Klopp being the major obstacle in the negotiations between the three parties.

The Brazil international has expressed his desire to move to Spain and the Reds' board wouldn't decline an offer of around 100m euros, considering that his transfer to the English club four years ago cost only 10m euros.

Barcelona are willing to meet Liverpool's demands, including bonuses to reach the aforementioned figure and reports from England state that either Andre Gomes or Rafinha might be included as part of any deal.

Neymar could be made to wait a little longer for his Paris Saint-Germain debut, with Barcelona refusing to finalise the transfer until they have received the player's release clause of 222 million euros.

The Catalans need to pass on an international transfer certificate, but without the payment, they are delaying the process.

Having already sat out the Ligue 1 opener against Amiens, the Brazilian could yet miss Sunday's meeting with Guingamp if the 222 million euros is not in Barcelona's account by then.

Real Madrid fans may not remember Luka Modric's second yellow card in the 89th minute of Los Blancos' Supercopa de Espana loss to Atletico Madrid in 2014, but it's come back to haunt them.

As the Croatian was sent off in Real's most recent Supercopa fixture, he was handed a one-match ban specifically imposed on the competition that his club failed to reach in the subsequent two seasons.

Therefore the suspension must be served on Sunday as Barcelona welcome Madrid to the Camp Nou for the first leg of the 2017 final, although Modric will be available for the return match a few days later.

After failing to find the net in nine finals as a Real Madrid player, Isco finally broke the curse, scoring his team's second goal against Manchester in the European Super Cup encounter.

Playing a one-two with Gareth Bale, the Spain international beat his compatriot David De Gea to make it 2-0, ten minutes before Romelu Lukaku reduced the deficit.

Before August 8, 2017, however, the midfielder had already played three Champions League finals, one Copa del Rey, two Club World Cup, two European Super Cup and one Spanish Super cup final, winning the eight of them, but also failing to score a single goal.

Being one of the best performers in last June's final against Juventus, Isco might have deserved the MVP title then, but he managed to obtain in Skopje on Tuesday night.

Isco was the man of the match in Real Madrid's UEFA Super Cup win, tearing Manchester United apart with utter class from the first minute until the last, but he could have been lining up on the other side in Skopje, the Red Devils deciding against signing him in 2013 after considering his head too large for his body.

Having seen his recent brilliance with Real Madrid and watching on as he dominated the Super Cup final, many in Manchester will have been left regretting their decision from four years ago.

According to ESPN, United were keen on his ability, but dismissed him after careful consideration.

Lionel Messi welcomed Jorge Sampaoli into his home on Tuesday as the Argentina boss formulates his plans for the upcoming World Cup qualifiers with Uruguay and Venezuela.

Sitting fifth in the CONMEBOL table, La Albiceleste travel to Montevideo on August 31 knowing that defeat could cut them four points adrift of a guaranteed spot in Russia with just three games to play.

Therefore Sampaoli has been holding meetings with Sergio Romero, Nicolas Otamendi, Ever Banega, and now Messi.

Spending three hours in the forward's Catalonia home the day after Barcelona's beating of Chapecoense, Sampaoli and his assistant Sebastian Beccacece analysed videos and discussed the state of the squad with Messi as they look for safe passage to the World Cup.