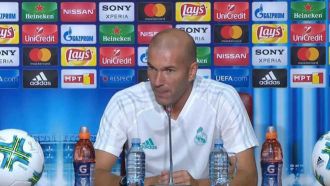 Zidane: "Cristiano is with us and he is here to play"

Zidane assured everyone that Ronaldo is in excellent condition and said he is in the same nick as he was on the day of the Champions League final.

Zinedine Zidane spoke to the media ahead of Tuesday's European Super Cup shortly after Jose Mourinho appeared and told the journalists in attendance that he would fight for Gareth Bale if the Welsh man was available.

How his team come into the game: "We arrive well and really want to get started. It is the first official game and we are looking forward to it. Physically, we have worked very well and we have rested well too. Now, everyone wants to start."

Keys to the game: "There are many. We will prapre our team like always. We know a lot about our rival but what is important to us is what we do. But I can't say anything in particular."

Ronaldo: "Just like always, there are many things going on, a lot of noise but he is calm. The thing that I noticed is the shape he is in, just like the day of the final for the Champions League after two months. And that is what interests me. The rest? We can't do anything about that but he is with us and that is very important. After three days, if he is with us then is to play. But tomorrow, you will see if he plays or not. The important thing is that he is here with us."

On Mourinho and Bale: "The important thing is that the player feels good. He has had plenty of continous training and that is very important. At the end of the season, it was not easy for him and now I see him well, involved, training with the team. What interests me is not what the manager says but what we will do tomorrow."

The difference between Mourinho's Real Madrid and his Real Madrid: "There is no difference. Everyone has their own way to train and the way they do things. There is not difference between one team and another. The only thing you have to do here is to give 100%. We know the obligation everyone has. Mourinho did great work here in Madrid and I believe that I am doing good work in Madrid. I intend to do my best but that means nothing. I have won two Champions Leagues but that means nothing because at times they say I am a genius, but they are silly. Every manager does the same. At Real Madrid, you have great players, that's always been the history of the club."

Whether he would play a player after two days of training: "Depends on how he arrives and what he has done along with the feelings of the manager and the player. I made the decision after speaking to the player. As I said, physically he is very good and that's what's important to the manager, the players and everyone."

On Mourinho flirting with Bale: "It doesn't bother me. It's normal and it's not going to change anything."

A final for Bale

The spotlights again point to Gareth Bale on the eve of the first official match for Real Madrid this season.

At stake, the European Super Cup and more, because, for the Welshman, the game against Manchester United - the team that want to sign him - is more than a match.

He wants to hit the heights after a summer full of rumours and a last season in which he was not the main man in any of the finals Los Blancos competed in.

He did not play in the European Super Cup against Sevilla because, after his brilliant European Championship, Zinedine Zidane left him at home to work on his fitness.

Bale wanted to start, but the coach said no, as he also did to Toni Kroos, with both having to watch Madrid win 3-2 from home.

The same thing happened in the Club World Cup, the Welshman missing the tournament through an injury sustained against Sporting of Portugal.

He was at La Rosaleda and wanted to be part of the title celebrations against Malaga, but Zidane didn't even afford him a minute.

He did, however, give him 20 minutes to enjoy the Champions League at home, but the reality is that of the four finals last year, he did not start any.

Now, Bale is especially motivated for the game against United, a team to which he has been linked throughout the summer, something that's been sharply denied by his representative Jonathan Barnett.

"I can't sign you because you do not speak," said Jose Mourinho to the player recently, and it's true that the Portuguese would be delighted to have Bale next season.

A collector of titles

Though he may not have enjoyed last season's glory of playing in all of the finals, his resume since joining Real is spectacular.

He has won all possible titles except for the Spanish Super Cup, a competition he has an appointment with next Sunday.

"I signed for Real Madrid to win titles and I am fulfilling all my dreams," he said at the beginning of this preseason to MARCA.

Now he wants to add individual glory to his collective success, being decisive in the important matches.

Without Cristiano Ronaldo, who will probably stay in Madrid training, the supporters and Zidane expect him to shine in Macedonia.

Mbappe is the new target for Paris Saint-Germain

Rising French star Kylian Mbappe is Paris Saint-Germain's main target for the new season, and they are willing to pay the 180m euros that Monaco will demand for his transfer, according to reports in France.

Newspaper L'Equipe claims that the Qatari owners of PSG want to form an attacking trio of Neymar, Edison Cavani and Mbappe, and they are already in contact with the player.

Fellow newspaper La Parisen states that the arrival of Neymar has moved PSG to the front of the queue to sign the young striker, ahead of Real Madrid.

Other reports claim that PSG are not afraid to contravene FIFA Financial Fair Play rules in their pursuit of Mbappe, as the club is also looking to sell players to balance the books.

Grzegorz Krychowiak, Blaise Matuidi, Serge Aurier and Angel Di Maria could all be set for an exit from the club.

L'Equipe also states that following Neymar's transfer, Mbappe has not hidden his preference for playing for the city of his birth and Monaco will negotiate providing their asking price is met.

If Mbappe signs he will become the second most expensive transfer ever, only behind Neymar, in a move that is likely to annoy other major European sides who claim that the French club are financial doping.

The European Association of Clubs (ECA), the 'lobby' of these clubs, meets next Wednesday in Madrid to discuss the new order of European football.

Mourinho: When I arrived Madrid weren't even Champions League quarter-finalists

Ahead of the UEFA Super Cup between Manchester United and Real Madrid, Jose Mourinho has been reflecting on his time at the Spanish and European champions.

Mourinho, whose time at Madrid ended after he fell out with almost all of the players, was keen to remind people that before he joined Los Blancos they were in the wilderness with regards to challenging for Champions League trophies.

"When I arrived, Real Madrid were not even reaching the quarterfinals," he said.

"With all of their incredible history.

"By the time I left, we had competed in three consecutive semifinals."

Having not faced his former club in a competitive match since his departure, Mourinho is looking forward to having the opportunity to get one over them.

"I do not have any problems with anybody [at Madrid] because I do not work with them anymore," he added.

"I am excited to play the Super Cup; to play against the champions of Europe and the team with more European trophies than any other."