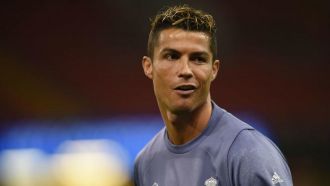 Cristiano Ronaldo is back

Cristiano Ronaldo worked with his Real Madrid teammates for the first time this summer, following his return from his post-Confederations Cup holiday.

Los Blancos trained at Valdebebas for the first time since their US tour and they did so with their No.7 and with their focus on Tuesday's UEFA Super Cup match against Manchester United.

With Ronaldo not yet at the same match fitness as his colleagues, he only joined the rest of Zinedine Zidane's squad for the beginning of the session, before working on his own as he aims to get up to speed.

The rest of the players trained normally, as they each try to convince their coach that they deserve to start against Jose Mourinho's side in Skopje.

Dani Alves: Neymar was the one who convinced me to sign for PSG

Many have assumed that one of the reasons Neymar wanted to move to Paris Saint-Germain was the presence of his friend Dani Alves, but the right-back has explained that the persuasion was the opposite way around, even if his signing was completed first.

That, though, doesn't quite add up with what Neymar said in his introductory press conference when he said he'd decided to make the move just two days previously.

"In contrast to what people think, I am the grateful one because Neymar was the one who convinced me [to join PSG]," Alves said after the team's 2-0 win over Amiens.

"I didn't have anything to do with [his transfer].

"I only told him to be happy.

"[My arrival] wasn't planned, but if he was able to convince me then it was because he was thinking about coming, I would say."

Alves also discussed the impact that the transfer could have on the pair's former club Barcelona.

"To lose a player of his talent is a blow, but that's football," he said.

"The same thing happens when Barcelona sign other good players from other teams, but it should be made clear that Neymar and I did not move for money.

"We have moved because of ambition and for new challenges."

As for the comparisons being made with Luis Figo's Barcelona exit, Alves said that it is different, because Figo left for Real Madrid.

The transfer market doesn't stop for the weekend and there were plenty of developments today, the highlights of which are below:

- Messi is believed to want countryman Dybala at Barcelona.

- Mahrez could be on his way to Monchi's Roma.

- Coutinho didn't feature in Liverpool's squad list, fuelling rumours he could be off to Barcelona.

Mbappe shakes off knee injury and travels to Manchester

With Real Madrid and Manchester City having been battling it out to try to sign Kylian Mbappe this summer, the 18-year-old's appearance in Manchester this Saturday will have worried some fans back in the Spanish capital.

The Frenchman was, however, only in the English city for a promotional event, even if he did make friends with City's Leroy Sane.

By posting a picture with Pep Guardiola's player, many fans of the English club went wild on social media, as recognised by Mbappe's former Monaco teammate and current Sky Blues player Benjamin Mendy.

Neymar wasn't yet available to Paris Saint-Germain coach Unai Emery for the capital city side's first match of the Ligue 1 season, but the topic of the Brazilian's arrival came up multiple times in the Spaniard's post-match press conference.

Without him, PSG earned a 2-0 win at home to Amiens and now Emery hopes the team will be even better with the star arrival in the side.

"His adaptation has to be good, and we will help him with that," Emery said on how he plans to add Neymar into the team.

"PSG will take a step forward in the club's growth with Neymar and Neymar opted for PSG because he wants to develop with this club.

"PSG want to have a greater impact and to have the chance to win the biggest titles, which will be easier with Neymar.

"Neymar can aspire to having more recognition and to reach the world stage.

"[The transfer] was a demonstration of ambition and of a desire to grow from both parties."

Speaking about the reception and the way the French fans have taken to the player, the former Sevilla coach was happy.

"The enthusiasm of the PSG fans and of France in general is good," he said.

"Neymar is a player who will bring extra renown to PSG.

"With Neymar, we will be a bit better."

As much as Emery is happy with the new arrival, he admitted there could be further transfer market action before the end of the window.

"The market finishes on August 31 and the club will keep working to improve the team," he stressed.

"There will be some departures too, for sure.

"I trust the work that the club is doing from now until the end of the market, but with the improvements of Dani Alves and Neymar I am content."

The next fixture for PSG is away to Guingamp next weekend, when Neymar should be able to debut.

Now that Neymar is history in the Barcelona offices, there is unanimity and consensus that Ousmane Dembele is a player they simply have to sign.

Negotiations with the Borussia Dortmund winger had already begun and now there is an agreement between the parties, but the deal is far from done at this moment in time.

Dembele's decision to move to the Camp Nou is based on sporting terms rather than economic terms, which were simple to sort out.

In June, specifically on the 21st, the player told Barcelona that he would not go even though it was his dream.

He did not want to drown on the bench because of the difficulty he'd face in stealing minutes from the MSN trident. Valverde's speech and his advance to convert the front three to a 4-2-3-1 were useless.

Dembele wants to play and be important. And, after his 'no' to the Catalans, came the confirmation to Borussia that he would stay in the club for a couple more seasons.

Nothing will be easy because Borussia director of football Michael Zorc considers the lack of time to react to be the main problem in letting either Dembele or Pierre-Emerick Aubameyang go.

There are no substitutes available and Zorc's word has value since he assured that the pair would continue in Borussia. And yet, that was before the sale of Neymar, which changes everything.

Zorc now knows how difficult it will be to hold onto Dembele.

Amid constant calls between the clubs, the player has already given his 'yes' to Barcelona because without Neymar there is no stopping his presence in the team, but both the winger and the Blaugrana want to respect Borussia.

The deal will be negotiated with empathy and thus the strategy is to listen to the German team and fight against the inflation of the transfer fee in the light of Neymar's world record exit.

Now, it's down to Dortmund to decide Dembele's destiny.

Email : [email protected]
Προηγούμενο : Neymar unveiled at PSG: "I've never been motivated by money" | Επόμενο : Zidane: "Cristiano is with us and he is here to play"
Προβολές : 542
- 4475 προηγούμενη ημέρα