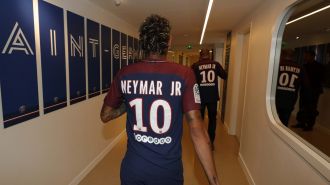 Neymar unveiled at PSG: "I've never been motivated by money"

The Brazil star was officially presented as a PSG player on Friday after completing his world-record move to Paris from Barcelona.

Neymar has been officially unveiled as a Paris Saint-Germain player after completing his world-record €222 million move to the French capital from Barcelona.

After PSG and the player’s representatives pushed through the deal late on Thursday, the Brazil forward arrived at the Parc des Princes on Friday lunchtime to give his first press conference as a PSG player.

Neymar: "If I can debut tomorrow I want to"

Motives: “Those people that think I have come here for money don’t know anything about me or my life. I have never been motivated by money. The first thing I think about is my happiness and the happiness of my family,” Neymar said.

Debut: “Playing football is what I enjoy most in life and if I can play tomorrow [against Amiens at the Parc des Princes] I want to.”

Piqué: “He stays”: “That was a joke on a day off when we got together for lunch. I asked him not to put it up [on social media] because I wasn’t sure what I was going to do, I still hadn’t decided. Piqué is a good friend of mine and I wish him all the best.”

Transfer: “This has been one of the most difficult decisions of my life because I was comfortable in Barcelona, because Barça is a great team and because of the friendships I had with fantastic players. I am very happy to have made many friends there. I want to thank all the players at Barcelona for their affection, they really took me under their wing when I arrived from Brazil. I spent a very happy four year there. At Barça I also had challenges but I wanted new ones. I spoke to the Brazilian players at PSG, who are also friends, and they were excited about me coming here; I already feel at home.”

MSN: “Protagonism? That had absolutely no influence at all. My desire to come to PSG is for a new challenge, to try something different. It isn’t because I didn’t feel comfortable at Barça. I came here because of the ambition this club has, which is in line with mine. I wanted to look for something bigger, new challenges. My heart told me to come.”

Cristiano Ronaldo: I never had any problem in England, so I'd like to return

The fact that he never experienced any tax issues in England could see Cristiano Ronaldo return to the UK, the player has admitted.

Speaking during his appearance in court last Monday, Ronaldo reportedly told the judge that he would consider going back to the country where he played between 2003 and 2009, before his transfer from Manchester United to Real Madrid.

"I never had any problem in England, which is why I'd like to return," the player said in a loud voice, according to Cadena SER radio station.

The 32-year-old then went on to explain the perceived differences between the tax systems in the UK and in Spain.

"I remember when I arrived in England they told me that things work like this," he said.

"When I arrived in Manchester as an 18-year-old they told me that [the tax arrangements used] were the best mechanism I could have, just as for the other players.

"In Spain, the indication was to pay more to avoid having problems."

He continually stressed that he was innocent and that he doesn't look to avoid paying what he owes.

"Whenever I go to a place, I pay what I have to pay, because the truth always becomes known," he said.

During the testimony, Ronaldo denied that he previously knew the societies in which his image rights were managed were located offshore, but said that he is now aware of this.

The 2017/18 Ligue 1 season is underway, but it wasn't a happy opening night for Kylian Mbappe, with the in-demand forward suffering an injury to his right knee.

As a result of the issue, he had to be substituted off in the 74th minute of the match against Toulouse at the Stade Louis II - at which point his team were winning 3-2.

The 18-year-old was able to limp off the field under his own power, but was visibly in pain.

On the bench, ice was then applied to the affected area and now the wait to learn of the full extent of the injury begins.

Valverde on Neymar's exit: Everybody is free to choose their destiny

Neymar had every right to move from Barcelona to Paris Saint-Germain, according to the man who was very briefly his coach, Ernesto Valverde.

The Blaugrana boss said that everybody should be free to decide their own fate and that he can accept Neymar's decision.

"Everybody is free to choose their destiny," he told Barca TV following the Catalan side's 1-1 draw with Gimnastic de Tarragona.

"We wish him luck, even if we'd have preferred him to stay here."

As for the draw against their second-tier Catalan rivals, Valverde pointed out that the main objective of the match was for players to rack up minutes and not the result.

One of the more disappointing issues to face Zinedine Zidane after Real Madrid's US tour was the realisation that Gareth Bale couldn't lead the team in Cristiano Ronaldo's absence.

The Welshman failed to score in the 235 minutes that he played in the States whilst Karim Benzema, the other BBC member on North American soil, also returned to the Spanish capital empty-handed.

Ronaldo watched the tour matches from his holiday retreat and he too will have noted that Bale has to contribute more to Real's offensive game.

Scoring goals is always demanded of a Real Madrid striker.

In total, Bale has 67 in 150 official matches; a modest figure considering his potential.

Indeed, scoring has been one of the major shortcomings of Real Madrid during pre-season.

Just five goals in four games from a team that normally can't stop finding the back of the net.

Much of that has to do with the absence of Ronaldo, and only Borja Mayoral, from the attacking element of Zidane's side, managed to score - against MLS All Stars.

Casemiro opened the scoring against Manchester United, Oscar scored against Man City and it was Kovacic and Asensio who grabbed the pair in the Miami Clasico.

Al-Khelaifi: Neymar is not revenge for Verratti

Paris Saint-Germain president Nasser Al-Khelaifi believes that new signing Neymar is the best player in the world, following the Brazilian's arrival from Barcelona.

With the summer's biggest transfer saga concluded, Neymar was presented in Paris on Friday after his 222 million euros move.

"Neymar is the best player in the world," Al-Khelaifi said.

"The French league will be more attractive because of him.

"Together with Neymar, we will rewrite the history of PSG, the club of the world's most wonderful city."

Barcelona had been in pursuit of PSG's Marco Verratti, but the Italian is not for sale in Paris and Al-Khelaifi denies the move for Neymar was an act of revenge against the Catalans.

"Neymar is not a vengeance for Barcelona's interest in Verratti," he said.

"It has nothing to do with that; we are signing the best player in the world."

Questions have been put forward regarding the deal and Financial Fair Play, but PSG are confident that there will be no issues.

"There has been a lot of transparency with UEFA and there is no problem with Financial Fair Play.

"We analyse the rules and regulations day and night so you can rest easy - go for a coffee!"

Conte: I don't understand why Diego Costa's lawyer is getting involved

Diego Costa's lawyer Ricardo Cardoso has claimed that Antonio Conte made his client's return to Chelsea impossible, but the coach of the Premier League champions has questioned Cardoso's intervention in one of the summer's longest-running transfer sagas.

With the striker set to hand in a transfer request, Conte was asked about Costa's future during a pre-Community Shield press conference.

"I don't understand why lawyers are getting involved," he responded.

"The situation is very clear and is always the same."

"For me, the situation is very simple.

"I repeat what I said in the past, maybe 10 days ago, that the player, his agent and the club knew very well the future of the player in the summer."

The Italian coach went on to further state that Costa and his lawyer have not been left in the dark and that they knew the decision that was made.

"'The decision on Diego was made back in January," he said.

Costa is keen to leave the club and to return to Atletico Madrid, but remains on Chelsea's books, even if his coach is not counting on him for the 2017/18 season.