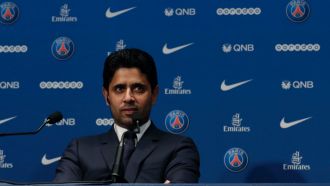 The president of Paris Saint-Germain, Nasser Al-Khelaifi, has attempted to play down the talk that his club are getting ever closer to the blockbuster signing of Neymar.

It would be a deal that would smash the current world transfer record as Barcelona would take in over 200 million euros, if the transfer were to go through.

Al-Khelaifi discussed the potential deal with Moroccan television station Medi 1 TV and was cagey when asked directly whether a move was close.

"All of this is talk. Neymar is a Barcelona player and we will see what happens with him," he said.

"PSG respect all contracts that exist between other teams and their players. I hope to speak about this issue another time."

However, he did suggest that the arrival of Neymar would be in line with the kind of thing that the club are trying to achieve.

"PSG's ambition is to have great players who are recognised around the world," he added.

"That helps to increase our reputation and the club look to have coaches and players who can help us realise or expectations."

The soap opera surrounding Neymar could come to an end next Monday when his move from Barcelona to Paris Saint-Germain could be finalised.

He has been the centre of the biggest transfer story of the summer for several weeks, when he was first linked with a surprise switch to Ligue 1.

According to L'Equipe, he will undergo a medical with Unai Emery's men over the weekend, although it isn't clear if it will take place in Barcelona, Paris or Qatar.

Monday has been chosen as the date to announce his signing, provided everything passes smoothly in his physical tests.

In addition, the newspaper also claims that the Blaugrana could seek to force an 'anti-PSG alliance' with a number of Europe's other major clubs, such is their fury with the French side in relation to the deal.

As Real Madrid trained at Soldier Field on Tuesday ahead of their friendly against the MLS All Stars, Gareth Bale left early with an ankle issue.

Los Blancos were taking in their surroundings for Wednesday night's clash against the best that Major League Soccer has to offer in Chicago.

However, Bale did not seem at all worried indicating that he simply left the session as a precaution.

In the end it was confirmed as nothing serious and sources at the club advised Zinedine Zidane will be able to count on the Welshman facing the MLS All Stars team.

Toni Kroos also didn't complete the full session but he too is easing himself back in after his own ankle injury.

In addition, there was concern among the medical staff following a collision between Dani Carvajal and Nacho, with the right-back sustaining a strong blow to the nose.

He has been through the wars on Real's current tour as it isn't his first injury, and he is currently working out with a bandaged wrist following an earlier blow to his arm in training.

Having originally been scheduled to come back on August 5, Cristiano Ronaldo has returned early to pre-season training for Real Madrid.

The Portuguese international's goal is to be fit in time for the Supercopa de Espana against Barcelona. He was given permission by the club to enjoy an extended summer break following his involvement in the Confederations Cup.

Following his return to Madrid yesterday for a court appearance, Ronaldo has decided to get the ball rolling as quickly as possible. At the moment he will train alone at Valdebebas, as the rest of the squad are still in the US as part of their pre-season tour.

The Holidays of CR7

Ronaldo has enjoyed time with family and friends during his holiday, photographed enjoying water sports in the Mediterranean. The last few days of his vacation are not typical of a footballer's break, with a return to Madrid to deliver a statement in court amid allegations of tax evasion.

Returning to training early is arguably the best way for Ronaldo to avoid any extra attention and to move out of public focus.

Villa: It's a shame for Villar but I hope it doesn't affect the national team

At 35-years-old, David Villa is looking forward to facing Real Madrid on Wednesday, but he also had words on the Villar case that has rocked Spanish football, hoping that it won't affect the national team ahead of the World Cup.

The former Valencia, Barcelona and Atletico Madrid striker has been selected to play for MLS All Stars, and he will relish the prospect of renew acquaintances.

"All the people are aware of LaLiga in the USA and as a Spaniard, for me to be here gives me great pride," he began at his pre-match press conference.

"We are going to face a great rival who obviously has more quality, but we can take advantage because we are already in the middle of our season whilst they are still finding their rhythm."

MLS clearly suits a player who has flourished at New York City, but not enough to earn a recall for La Roja it would seem.

"Honestly it is very difficult because I have not been called up for three years but I have always said that I'll never give up," he continued.

"The national team is what made me happiest playing football, putting on that shirt.

"Giving that up is impossible for me, but it's complicated.

"The Villar situation is hard for those of us who want the national team to do well, we hope it will not affect their future at the World Cup in Russia."

Looking ahead to the new LaLiga season, Villa saw benefits for both Los Blancos and Barcelona.

"Real Madrid have the strongest squad of the last few years, but Valverde has plenty of credit in the Spanish League and he will certainly do very well."

Nemanja Matic has been confirmed as a Manchester United player, signing for the Red Devils in a deal that could rise to 45 million euros, after the Serbian international chose to leave Chelsea and reunite with his former manager.

Matic's arrival is another of Mourinho's defensive midfielders, a position that he has become obsessed with over the years.

The former Real Madrid and Inter boss has never failed to strengthen that position at every club he has managed, sooner or later. In total, he has spent over 300m euros on ten players in this position, far more than he has splashed out on strikers for his great sides.

Mourinho was keen to make his mark at Stamford Bridge, and make an impact in the Champions League, under the watchful eye of Roman Abramovich. He bought a favourite of his, Michael Essien from Lyon for 38m euros, and during his first spell in London he also bought three others for that role: John Obi Mikel (20m euros), Tiago (12m euros) and Lassana Diarra (4.5m euros).

After several failed attempts to conquer Europe with Chelsea, Jose moved on to Italy, and Inter. At the Estadio Giuseppe Meazza he won his second Champions League, following success with Porto, with Thiago Motta in a deep midfield role, alongside Wesley Sneijder.

The Brazilian-Italian had landed at the Milanese side from Genoa for 12m euros. The other player in that position to make a move to Inter under Mourinho was Sulley Muntari, signing for 16m euros from Portsmouth.

The Estadio Santiago Bernabeu was where Mourinho spent the least on defensive midfielders, with Sami Khedira his only buy in that area of the field. He brought in the German international from Stuttgart for 14m euros, and he was a key man during Mourinho's three years in Spain, despite not always being a fan favourite.

The coach's return to Chelsea saw him managing a very different side to the one he had left in 2008, and he did not hesitate to bring in reinforcements in his first winter transfer window. He brought Matic back to the club from Benfica, and the Serb became a fixture in the side.

Mourinho is such a fan of Matic that he has moved for him again. Mourinho made several changes during his first season at Old Trafford, particularly in midfield. Paul Pogba came in for 105m euros, as an offensive midfield player, however he was asked to play a deeper role alongside Ander Herrera, with Marouane Fellaini playing at the midfield tip.

Email : [email protected]
Προηγούμενο : In France they say that Neymar will be a PSG player within 48 hours | Επόμενο : Χαμός
Προβολές : 502
- 4541 προηγούμενη ημέρα