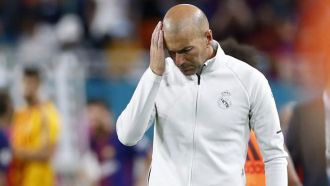 Three matches without a win: work for Zidane to do before August 8th

It is true that not too much should be read into pre-season matches with it being more about preparation and trying out new ideas but still for Real Madrid not to win a single game does stand out especially with the European Super Cup against Manchester United just ten days away.

Madrid were beaten by Manchester City and Barcelona while they drew against Manchester United during the America tour which ends with a clash against an MLS combined team on Wednesday night.

It will be the final test before the final in Macedonia and the areas that need to improved are:

Madrid have conceded eight goals in three games which have come too easily as was shown for example in the move by Martial for the goal by Manchester United, or in the dribbling from Neymar and Messi. Ramos is still not 100 percent while Nacho who normally is solid made a mistake for Pique's winner.

There have been worrying moments where there has been a lack of concentration especially against City and Barcelona where they conceded early goals.

One of the hallmarks of Zidane's team has been the way they have gone on the attack in matches to win but during the pre-season they haven't had the physical shape or the tactical awareness to be able to cause a continual threat to the opposition. They have had to come from behind in matches.

Benzema and Bale have not shown leadership in attack in any of the games. They have not been able to score and at times have disappeared while Marco Asensio has again shown that he is ready and waiting for a place. Meanwhile they are also still waiting for Ronaldo who returns on August 5th.

It is surprising to see that the players that have got the goals for Real are not your typical goalscorer with the exception of Asensio as the others have been Casemiro, Oscar and Kovacic.

Zidane: The important thing is to be ready for August 8

Barcelona drew first blood against Real Madrid ahead of the new season with a 3-2 victory in a pulsating Clasico friendly on Saturday in Miami.

Real Madrid's defeat means they end their pre-season tour of the United States without a victory.

"I don't care much about the defeat, it always hurts but right now it's not the important thing," said Madrid coach Zinedine Zidane.

"It's pre-season. The results haven't gone as hoped for but it will not change anything. The important thing is to be ready for Aug. 8 (when Madrid face Manchester United in the European Super Cup)."

Madrid were missing Cristiano Ronaldo, still on holiday, but both teams were close to full strength.

Ahead of his return to Real Madrid training on August 5, Cristiano Ronaldo has an even more important date in his diary, as he prepares to testify in court this Monday, July 31, in relation to his tax case.

Accused of defrauding the Spanish tax authorities of 14.7 million euros between 2011 and 2014, the player will appear in Court Number One in Pozuelo de Alarcon as he aims to prove his innocence.

The basis of his defence, as agreed upon by his agent Jorge Mendes and his lawyer Antonio Lobo Xavier, as well as the firm Baker McKenzie, will be that there was a difference of opinion with the Spanish taxman when it came to interpreting the rules.

As such, the first defence offered by lawyer Carlos Osorio, which was to deny the link between the player and the relevant offshore accounts, has been discarded.

"Nobody will believe that Ronaldo doesn't know what he is signing," was the response of the rest of the lawyers to this plan of action.

According to the financial authorities, Ronaldo "voluntarily and consciously" defrauded the Spanish taxman through three companies - Tollin, Arnel and Adifore - set up in the British Virgin Islands and only paid the relevant tax in 2014, despite having been residing in Spain since his 2009 move to Real Madrid.

On Monday, the player will attend court as someone being investigated, but if the judge finds sufficient evidence of a crime having been committed then Ronaldo will become a defendant.

If a formal accusation if filed and the judge decides to put the Portuguese through the judicial process then there will be a full trial and he could, in this case, be hit with a prison sentence - which tax agents estimate could be seven years, with the possibility of being reduced to 21 months.

Sevilla are set to welcome Jesus Navas back to the club on a three-year contract, with the option for a fourth year depending on the number of appearances made in 2019/20.

The transfer won't be made official just yet, with the Andalusian club still reeling from the late scuppering of their seemingly finalised Vitolo renewal, but his return will be announced once the relevant documents are signed.

There had been financial issues to resolve between the two parties before the player would give the green light to the move, but the Diario de Sevilla report that these have now been settled.

The sight of the winger back in a Sevilla shirt will be an emotional moment for the fans at the Estadio Sanchez Pizjuan, with the 31-year-old ready to come back to the club he left in 2013 to join Manchester City on a four-year English adventure.

Guangzhou Evergrande have rejected offers in the past but Barcelona seem ready to part with the €40 million needed to release the Brazilian from his contract.

Barcelona will pay Paulinho's €40 million release clause to ensure they strengthen their midfield in this transfer window, according to Barcelona's RAC1. The Catalan club have chosen Paulinho as the man they want and have pursued him for the majority of the window but with no luck. That is set to change, however, as the club are forced into moves with Neymar inching closer to PSG.

Guangzhou Evergrande have rejected offers for the player in the past but Barcelona have finally accepted that the Chinese club will accept no less than the €40 million stipulated in his contract. The negotiations are not set to be smooth after the Chinese club looked into the possibility of suing Barcelona over their approach for the Brazilian. It was also one of Neymar's wishes that his compatriot join the squad and it could be seen as a move that will appease the attacking star despite reports that he is on the brink of a move to PSG.

The club bought Andre Gomes and Denis Suárez last summer but neither staked a claim for regular enough minutes in Luis Enrique's midfield last season. Andres Iniesta struggled with fitness issues all season and the side needed more form the players who stepped into his role but it never happened. Sergio Busquets and Ivan Rakitic were solid as ever but that third spot in midfield is up for grabs when Iniesta needs rest and when circumstances demand change.

Meanwhile, Coutinho remains heavily linked to a move but the belief in Liverpool is that he can be convinced to stay. He was even made captain in a friendly on Saturday to ensure he knows how highly he is thought of by Jurgen Klopp and the club.