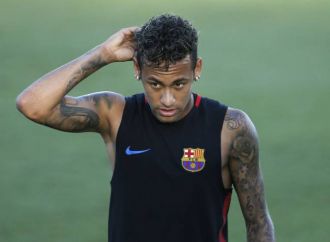 Radio Montecarlo cite a source close to the player: "Neymar has agreed terms and we are waiting for PSG and Barça conculde the deal early next week".

Neymar will complete his move to Paris Saint-Germain on Monday or Tuesday of next week - that is according to reports on Radio Montecarlo (RMC). The French broadcaster claims that Neymar has also settled his personal terms with PSG - a five-year deal, during which he will earn 30 million euros before tax. “The agreement is in place; the finer details of the contract have also been agreed on”, a source close to the player told RMC, adding “Neymar has made his choice. The fight with Semedo underlines how he feels. We are expecting the two clubs to complete the operation on Monday or Tuesday. As far as we are concerned, his future is in Paris”.

Elsewhere in France, L’Équipe reports that PSG want to open negotiations directly with Barcelona to reduce or avoid the 21% VAT costs that will be added to the operation so that the final outlay will not surpass the 222 million euros corresponding to the player's buy-out. On a fiscal level, meeting a player's buy-out clause is a complex operation because, according to the law, it is the player who must come up with the buy-out amount and present it in person. That means that PSG cannot simply give Neymar 222 million euros and ask him to turn up at the LFP headquarters - such procedures are illegal in Europe. Nevertheless, Radio Montecarlo affirm that both clubs will come to an agreement and an arrangement by next week

Such a deal would not be an infringement of UEFA's Financial Fair Play rules. After being fined three times for failing to comply to them, PSG are not prepared to fall foul of the rules for a fourth year and according to RMC, the club has done its calculations and by signing Neymar they would not be in breach of the law. PSG have made a detailed study of what kind of economic impact Neymar's arrival would have on the club's bank balance. Those studies show that the club would significantly boost income through marketing and publicity - enough to justify the transfer under Financial Fair Play guidelines. UEFA's Head of Club Licensing and Financial Fair Play Andrea Traverso explained earlier this week in an interview with La Gazzetta dello Sport: “If a club buys a player, it is understood that they will have done all of the necessary calculations in advance. If they haven't, they will face a fine. But we cannot impede clubs from buying players”.

Iniesta: I don't think 200-300 million will be more beneficial for Barcelona than having Neymar

Clearly irked by a constant line of questioning regarding Neymar's transfer situation, Andres Iniesta faced the press in Miami with Luis Suarez and suggested only the Brazilian himself can put an end to the ongoing soap opera.

The midfielder is looking forward to only the second El Clasico clash to be played outside of Spain.

"We would like you [the press] to not keep asking [about Neymar] so much, but to end this, there is only one way: Neymar will speak," were Iniesta first words, no doubt designed to try and shift questioning on to the game against eternal rivals Real Madrid.

Suarez shared the same opinion as his captain.

"Neymar will give his explanations," he said.

"We have to support him with the decision he makes."

With there still being a distinct possibility that a move to Paris Saint-Germain could happen, Iniesta was clear as to his teammates' importance to the side.

"I do not think 200-300 million will be more beneficial for Barcelona than having Neymar." he continued.

"I have no doubt that we all wish him to continue with us."

The pressure could finally be beginning to tell on the Brazilian who was involved in an unseemly training ground scuffle with new signing Nelson Semedo.

"It's true that there was that incident, which can be part of a training session," Iniesta said.

"But because of the situation and what is being said about Ney, which is worldwide, it has much more significance.

"For those of us who are training however, it's nothing."

The Clasico in Miami is the first of three over the course of this pre-season, and though it's being billed as a friendly, both sides will want to win.

"It's an atypical game because it's preseason and far from home," Iniesta noted.

"It's part of the preparation and it's a very special match because that's what Clasico's are.

"I hope it's a great show, considering it's right at the start of the season, but that should allow us to gain rhythm and confidence."

Suarez: As teammates, we can only support Neymar in his decision

Though it won't come as a great surprise to see Neymar leave Barcelona for Paris Saint-Germain, it was still interesting to note Luis Suarez's demeanour in his pre-match press conference, where he suggested he could only support the decision his Brazilian colleague comes to.

The Uruguayan is looking forward to El Clasico but was, nonetheless, bombarded with questions about one third of MSN.

"We've all said that it's clear that the sooner the situation is clarified, the better it will be for everyone," Suarez began.

"Ney will give his explanations and we will have to support him in the decision he makes."

That decision, Suarez hopes, will be to stay at the Camp Nou.

"It is a pleasure to play with him and it would be a pity if he didn't stay," he continued.

Only the second El Clasico to be played outside Spain, despite being a friendly, Suarez still wants to beat Real Madrid.

"It's a Clasico so obviously we want to win, but also we want to be getting into our rhythm," he concluded.

Thiago Silva: Everyone will be talking about Neymar after the Super Cup

Paris Saint-Germain defender Thiago Silva hinted that he believes Neymar will make the move to the Ligue 1 club.

The Barcelona star has been linked heavily with a move to the French capital this summer for a record-shattering transfer fee.

While PSG do have the small matter of a Super Cup final against Monaco to worry about over the weekend, Silva acknowledged that focus will immediately turn to his compatriot afterwards.

"I speak to Neymar regularly but we don't discuss that. Everybody knows my thoughts. He is my friend, we have played together for the national team for seven years," said Silva.

"We have a great friendship. Now, it is the time for him to decide. I know what an important player he is from our time with Brazil.

"Now isn't right time to talk too much about it. We must wait for the game [to finish] and then I think everyone will talk about it."

Neymar has been in red hot form in pre-season, scoring all of the Blaugrana's three goals so far.

Puyol: Neymar must talk and explain what he wants to do

The ball has been firmly placed in Neymar's court by former Barcelona captain Carles Puyol, who insisted that the forward must step up and clarify the situation.

He has largely been a silent figure so far this summer as he continues to be linked with a Camp Nou exit.

Paris Saint-Germain appears to be the likely destination for the Brazilian, who has not yet made any public declaration about his future, much to Puyol's chagrin.

"I don't know what's going to happen with Neymar. He needs to talk and explain what he wants to do because I can't control him or speak for him," said the former defender.

"The decision needs to be made by him. I'm not responsible for the club so I don't know if they have already decided on what they're going to do.

"I'm not sure if he dreams of leaving but it is getting harder for a player to spend his entire career with one team. Football is changing, even though there are special cases like Lionel Messi, Sergio Busquets and Andres Iniesta."

Last year was not a successful one for the Blaugrana, something which Puyol acknowledged, but he believes that the hiring of Ernesto Valverde puts them in a strong position to bounce straight back.

"Things were tough for Barcelona last season. You can't always win but winning the Copa doesn't compare with LaLiga or the Champions League," he added.

"Winning a trophy is always nice though and they will want to win everything again this year. The team won lots of titles with Luis Enrique and he did a great job.

"Now, there is a new man in charge and the ideas of the team won't change. He will have his nuances, as with every coach, but largely the philosophy remains the same.

"Valverde's teams have always played well so we will see how it goes. He has a spectacular squad and I'm sure they'll be fighting for everything."