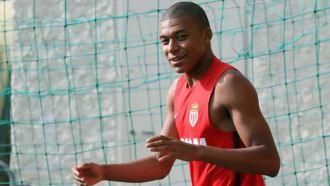 The football transfer world record is set to be smashed as Real Madrid are understood to have agreed a 180 million euro deal with Monaco for Kylian Mbappe.

Pending the potential 222m euro transfer of Neymar to Paris Saint-Germain, this move would beat the 105m euro record set by Paul Pogba last year as Los Blancos hope to seal the striker's signature in a matter of days.

Set at 180m euros, Mbappe's fee will be split down to 160m euros up front with 20m euros worth of add-ons as the Frenchman pursues his career at Madrid, although the value of those variables may be higher, towards 30m euros.

Monaco had originally requested 190m euros but now coach Zinedine Zidane has given his blessing to the new agreement in principle, following a meeting with club president Florentino Perez and general director Jose Angel Sanchez out in Los Angeles.

The move comes after Alvaro Morata left for Chelsea for a fee of 80m euros, opening the way for Mbappe to challenge the BBC dominance at Real, with the teenager thought to desire an immediate transfer rather than a year's loan back in Ligue 1.

Earning 7m euros net per year on a six-year contract, the progress on Mbappe's LaLiga switch comes amid Monaco's public statement against 'great European clubs' making illegal advances for the player's signature, which was believed to be a veiled reference to meetings with Manchester City boss Pep Guardiola.

The Citizens look to be out of the equation now as they are aware of the starlet's close proximity to a Real move, with PSG also struggling to convince their French counterparts to sell to a domestic rival as they focus their efforts on Barcelona's Neymar.

It appears the Barcelona are ready to make Liverpool striker Philippe Coutinho one of the signings of the summer after it was revealed that they have agreed a deal with the player.

His transfer will not be easy, especially given the words of Reds coach Jurgen Klopp who has said that he has no intention of selling any of his stars.

His capture could exceed 80 million euros according to RAC1, a large amount of money that would allow Liverpool to enter the market for other players.

Pique: I would understand if Neymar left because he wanted to be the leader of a team

After the furore that Gerard Pique caused with his picture suggesting that Neymar was staying at Barcelona, the defender said in a press conference that he would understand if the Brazilian decided to leave the club.

Not a day goes by it seems without more news on Paris Saint-Germain's world record bid of 222 million euros for the players services.

"It was a personal opinion," Pique said of the photo that quickly went viral on Twitter.

"The one that has to communicate if he stays or not at the end of the day is Neymar.

"My desire is for him to stay, so I uploaded the photo.

"Anyway, I would understand if he went to another team if what he wants is to be a leader, since in Barcelona he has coincided with the best ever, Leo Messi."

Mourinho: Bale? I'd like to have two more players

The door is open for Gareth Bale to join Manchester United, after Jose Mourinho hinted that he is interested in signing him.

United have already snapped up Victor Lindelof and Romelu Lukaku this summer but the Portuguese doesn't want their business to end there.

Mourinho was caught on camera talking to Bale before his side's game on Sunday against Real Madrid and told him that he couldn't buy him because the player himself hadn't spoken up.

"I'm happy with my team but I would like to have two more players. One of them would be a way to give me more options and balance to the centre of the field and the other an attacker who can play on both wings," Mourinho said.

"But I never talk about players from other teams because I wouldn't want another coach to talk about my players."

Mourinho also revealed that he was not pleased whatsoever with the transfer market dealings of the Red Devils in recent years under Louis van Gaal.

Coaching BBCM will be even more difficult for Zidane

The potential arrival of Kylian Mbappe at Real Madrid, which is beginning to look more likely, would create a big but welcome headache for Zinedine Zidane.

He is in charge of keeping a squad packed full of superstar talents happy and has so far managed to do an excellent job of it.

However, the big question now being asked by Real fans and many of the club's staff is how will Zidane manage a team with Cristiano Ronaldo, Karim Benzema, Gareth Bale and Mbappe in attack?

The problem isn't so much the 4-3-3 system which would require one of the attackers to be dropped, but rather what you do with players like Isco, who truly proved himself to be among the elite last season, or Marco Asensio, who the club have very high hopes for.

Those players would find opportunities even more limited and that's without mentioning players like Dani Ceballos, Lucas Vazquez and Mateo Kovacic.

At the beginning of the summer, Zidane outlined his condition for the arrival of Mbappe and that is was that one of the current BBC trio would have to be sold.

All signs pointed towards that man being Bale, with whom the Frenchman has a great relationship but who has suffered recently from injury problems.

However, the winger does not want to leave and the club do not seem keen on the prospect of allowing him to move on so the first option is to convince Zidane that he is the man to oversee the best squad in the club's history.

He had similar issues last season with players like Alvaro Morata and James Rodriguez and it is a scenario which would be even more difficult in the year ahead with Mbappe at the club.

That is because the Spaniard would be replaced by a player who would become the most expensive footballer ever and joining for 180 million euros means he is coming to the Spanish capital to play.

The Colombian would effectively be replaced in that regard by Ceballos, a man who may have to show a little more patience in waiting for his opportunity this season.

It truly is an embarrassment of riches that Real will have at their disposal.

Emery: Neymar? It's not the right time to talk about that

Currently, the Spaniard is focused on his club's training during preseason, although he mentioned the possibility of discussing the Brazilian in the future.

"Right now our only intention is to prepare for the match on Saturday."

The former Sevilla coach also lauded the great work from his backroom staff this summer.

"I will only say that the club is working very well and will continue to work to have a great season," he added.

As for his current striker Edinson Cavani, the Uruguayan did not shy away from acknowledging his fellow South American.

"We're talking about a great player and everyone likes to play with the big players," said the forward.

"That's transfer market stuff and since I've been here, my teammates are the best.

"If a new player arrives, they will be welcomed," he concluded.