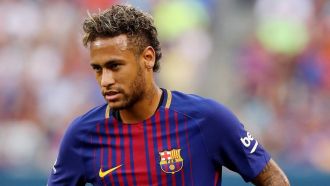 Neymar to PSG: the reasons why

In this week's edition, France Football looks at why Paris Saint Germain are an attractive proposition for the Barça winger. There are four key reasons.

The soap opera surrounding Neymar’s potential move from Barcelona to PSG is dominating the collective front page of the sporting press. The French magazine France Football has dedicated a special report to the reasons behind the Brazilian’s desire to switch Catalonia for Paris.

The first factor that France Football discusses is simple: Neymar wants to be the undisputed leader of a footballing project. That will never happen while he is a team-mate of Lionel Messi.

The Brazilian always speaks glowingly of his Argentine ‘MSN’ companion, and while it appears that the pair have a tight relationship, the reality may be different. Neymar wants to shine outside of Messi’s shadow, an ambition that also led Samuel Eto’o and Zlatan Ibrahimovic to seek a way out of Barcelona.

France Football also suggests that the close friendship between Messi and Luis Suárez makes Neymar feel a little out of place, despite his insistence that he is “very happy at Barça”.

Related to the first point, the magazine emphasises the strength of Neymar’s desire to win the Ballon D’Or. According to France Football, the player has been desperate to lift the prize since his arrival in Europe in 2013. His position in Lionel Messi’s shadow has inhibited his ability to do so, and he even finished behind Luis Suárez in the last vote.

Neymar believes that moving to PSG would increase his chances of lifting the prize he so desires.

The financial clout of PSG’s offer will undoubtedly influence Neymar’s decision. The French magazine assures that he would become the best-paid player in the world, above Messi and Cristiano Ronaldo, if he were to sign for PSG.

Neymar’s father must also form part of the equation. PSG would also be willing to offer him a succulent sum of money to facilitate the transfer.

Finally, France Football stresses the importance of the fact that many of Neymar’s Brazil team-mates play for PSG (Marquinhos, Thiago Silva, Dani Alves, and Lucas Moura). It is a determining factor, and could tip the player in favour of a move to Paris. At Barça, Neymar enjoyed particularly firm friendships with his compatriots Douglas, Dani Alves, and Adriano.

Casemiro: 'Neymar would be welcome at Madrid'

The midfielder joked when asked about his Brazil team-mate by Globoesporte. He wished Neymar luck whether he stays at Barcelona or joins PSG.

Real Madrid midfielder Casemiro has waded in to the Neymar affair. After scoring in the defeat on penalties to Manchester United in Santa Clara, Globoesporte asked the Brazilian about his compatriot. Casemiro jokingly suggested a move to the Bernabeú: “Neymar is the one to decide his future… he knows what he has to do. Why not play here at Real Madrid? He would be welcome here.”

Casemiro wishes Neymar 'all the luck in the world'

Casemiro, who has shared the Brazil dressing room with Neymar, said he has not spoken to his international team-mate about his future, but wished him the best with whichever course of action he chooses.

It appeared that the soap opera surrounding Neymar was drawing to a close on Sunday evening, when Gerard Piqué posted a picture with Neymar on social media, with the caption “he stays”.

Yet it continues to drag on. According to ESPN, those in Neymar’s inner circle do not understand the picture.

Neither do some of Piqué team-mates. “Ask Piqué about that message, I hope that it’s not a joke. I haven’t spoken to Neymar,” said Jordi Alba on Monday.

Barcelona hope that the Brazilian will decide his future imminently, in order to put the rumours to bed. But another twist in the plot would not come as a surprise.

Zidane: "I haven't asked the club to sign a striker but..."

Real Madrid's coach spoke to the press in Santa Clara after his side were beaten in the penalty shoot-out following a 1-1 with Manchester United.

Zinedine Zidane faced the media after Real Madrid's opening game of the pre-season - his side lost Sunday's International Champions Cup meeting with Manchester United in the penalty shoot-out after the match ended 1-1 on full-time.

How pleased were you by the team's performance and the youth team players, considering this is the first outing of the pre-season?

I've very happy with how the team performed. It's the first game and the players put in a very complete performance. The younger lads played 45 minutes and did very well. I'm happy with the display and that we didn't suffer any injuries.

United have had longer to prepare...

Both teams missed penalties. We stood up well to United considering that this was our first game of the summer and we competed well. They have had four games before this one. So it's positive for us. Now we are looking ahead to the next game. Let's hope we can continue picking up form.

When will Sergio Ramos be fit to return?

He's almost ready. By Monday or Tuesday of this week he will be back training as normal with the squad. He delayed joining up with us because it was better for his ears not to fly. He's on the mend.

Zidane on the chances of Madrid signing a striker

Madrid's attack. Have you asked the club to sign a centre-forward?

No - and I'm sure you already know that. I'm not going to ask for anything. I will continue chatting to the president. We have 28 players in the squad, and I'm happy with how all of the players are working. But after that we'll see what happens, up until 31 August anything can happen. But I haven't asked for anything.

Was this friendly a good test for next month's UEFA Super Cup?

We are preparing for the 8th August. That is our sole objective - it's our first official game. By that day we want the team to be in the best form possible so that we can try to win the trophy.

You have one midfielder too many. Will there be enough playing time for everyone? Will Llorente go out on loan?

We have a complete squad and for the time being that's how it will continue. It's possible that a player could arrive or one could leave but right now I am very happy with the squad I've got.

Koke: 'The Atleti staff have got stuck in to us, but it's necessary'

The homegrown midfielder discussed pre-season on the club's website, and also thanked the Mexican people for the consistent warmth of their welcomes.

Atlético Madrid have landed in Mexico. In the early hours of Wednesday morning (03:00 CET) Diego Simeone's team will face up against Toluca, in a match to commemorate the Mexican club's centenary year.

Through the club's website, Koke gave an update on the first stage of pre-season, with Los Rojiblancos about to begin a run of pre-season friendlies ahead of the start of the LaLiga season.

"We know that these first two weeks in Los Ángeles de San Rafael are fundamental. The coaching staff have really got stuck in to us, they have demanded a lot to charge up our batteries and allow us to meet the objectives we have for the season," the academy product reasoned.

In addition, Koke thanked the Mexican people for their warm welcome: "The people always receive us with a lot of warmth when we come to Mexico. I hope that it will be no different this year, and that we can play a good game.