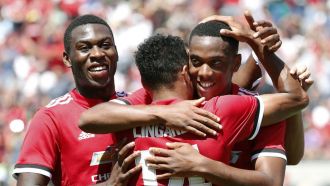 Manchester United won on penalties in the game in Santa Clara after Lingard gave them the lead and Casemiro replied with a second half penalty.

Zinedine Zidane made just two changes from the side that won the Champions League in June with Nacho and Lucas Vazquez replacing Ramos and Ronaldo. Jose Mourinho went down the more experimental route with less seen United faces including Andreas Pereira, who played on loan with Granada last season.

It was a chance for the likes of Pereira and Anthony Martial to prove themselves and Martial did just that when he beat three Real Madrid players to set Jesse Lingard up at the back post at the end of the first half to give United the lead.

It was the best action of a first half that had plenty of attacking intent with very little attacking execution. Bale looked good, as did Luka Modric, who was his usual self and dictating proceedings in the middle.

For United, Pereira worked hard but they looked like a team who had rarely played with each other. Nevertheless, they had the lead and the second half arrived with multiple changes for both sides.

The game was disrupted by all the changes and the game, which these friendlies tend to do, suffered from it. There was very little continuity to the game and United's lethargic display was one of the main reasons for that while Real Madrid's youngster showed off their desire to impress Zidane in what are vital minutes for their development within the first team squad.

It looked like we would not see another goal until Theo Hernandez decided to take the game on his shoulders and started to roam into enemy territory. He won a penalty after Lindleof took him out of it in the penalty area, which Casemiro buried it.

Real Madrid and their team of youngsters continued to work hard and caused problems for United but they could not take the lead. Achraf looked good on the right and he was the main threat for United while United looked stale and out of sync with their perceieved "A" team on the field.

It ended 1-1 in a game that was hard to gauge due to the number of changes on either side. The game went to penalties as they could not be separated.

What ensued was laughable as after four penalties, nobody had scored. Martial drove over and Kovaci, McTominay and Oscar had their penalties saved.

Mkhitaryan and Quezeda scored before Lindleof and Theo Hernandez missed with pitiful efforts. Daley Blind kept it simple as he drove it down the middle to score and Casemiro rattled the crossbar to give United the win.

Neymar has moved a step closer to leaving FC Barcelona following a meeting between his father and club directors with the Catalan side seeking to convince him to turn down Paris Saint Germain.

They spoke after the friendly win over Juventus where Neymar stood out with two goals in the first half, but they failed to find agreement and it appears as though talks with the French club are an advanced stage.

Barca players have tried to convince Neymar to stay but some are pessimistic that this can now happen following the failure to see eye to eye in the meeting.

Neymar and PSG: 222m to be paid via the personal sponsorship of Qatar

After a meeting this week with Paris Saint Germain's sporting director, Artero Henrique, and with the lawyer and member of the Parisian board of directors, Sophie Jordan, Neymar's father is committed to having his son sign for Paris Saint Germain once they deposit the 222 million euros of his termination clause, which it appears will be done via the personal sponsorship of Qatar.

The terms of the verbal agreement reached between PSG and Neymar cover a duration of six seasons, and in each the player would receive 30 million net, the same that Messi earns after his renewal, but not including a signing bonus.

After the experience last summer, when the situation was very similar - Neymar Sr. ensuring that his son's decision to leave Barcelona was taken and that it was only a matter of choosing between PSG, Real Madrid and Manchester City - PSG are maintaining prudence and do not want another disappointment.

However, according to what the player's father has said to them, it seems that this time Neymar will keep his word.

PSG's board are working to find the best formula so that the payment of the 222 million euros will not conflict with UEFA's Financial Fair Play (FPF) rules.

The owners of the Parisian club are exploring the possibility of a personal sponsorship agreement with Neymar via Oryx Qatar Sports Investments, its investment fund which is in fact the governing body of PSG, a Qatari property.

They would pay for it or a business partner.

Given Neymar's undeniable publicity streak, they believe he could justify himself to the UEFA Club Financial Control Committee and, given that it would be the player who received the money, the 222m would not impact on the club's accounts

As he sets his sights on the new season, Cristiano Ronaldo revealed that rivalry with his fellow players is what continues to drive him to greater heights.

The reigning Ballon d'Or winner will have his work cut out for him to retain the trophy, he believes, based on the performances of some of his rivals in the game.

"Of course it is always going to be a fight between us," he told ESPN on his recent trip to China.

"I'm there along with [Lionel] Messi, Neymar, [Robert] Lewandowski and [Gonzalo] Higuain...

"That kind of fighting and competition is healthy and that is what motivates me, being better than them year after year.

"The best always try to compete with the best, it keeps you sharp. You know you can never lose focus because others will overtake you."

The Barcelona defender took to his Instagram account posting a picture of the defender with the Brazilian and a clear message claiming "he stays".

Has the Neymar Jr. "should I stay or should I go" uncertainty finally been cleared up?

After weeks of speculation suggesting that the Brazilian player was set to depart Camp Nou for a move to Paris Saint Germain, Gerard Pique has taken to his Instagram account with a claim that the forward is to stay with the Catalan side.

Email : [email protected]
Προηγούμενο : A meeting between Neymar's father and the leaders of Barcelona | Επόμενο : Neymar to PSG: the reasons why
Προβολές : 532
- 4364 προηγούμενη ημέρα