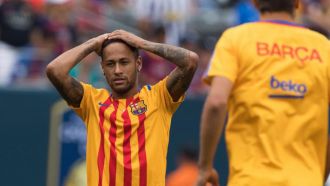 A meeting between Neymar's father and the leaders of Barcelona

These are key times for Neymar's continuity at Barcelona and after the Catalan club's victory against Juventus in which the Brazilian shone above everyone with two goals and a fantastic performance in the first half, the player's father met with board members in East Rutherford .

On the table was Paris Saint-Germain's interest in closing the biggest footnall transfer in history.

His teammates have tried to convince Neymar to stay, but the operation to sign for the Ligue 1 giants is already very advanced.

Neither Josep Maria Bartomeu nor Ernesto Valverde nor his teammates are the key to Neymar staying at Barcelona or signing for Paris Saint-Germain; the king pin in any deal is the player's father.

The president of the club and the Brazilian met after the evening training session on Friday and talked for 20 minutes.

It would appear that Bartomeu could only conclude, because of Neymar's words and demeanour, that the future of the transfer operation is solely down to Neymar Snr. at this point.

MARCA have already reported that the player's father has not signed anything with the French club, meanwhile, Neymar has expressed his intention to stay at Barcelona to his dressing room colleagues.

The conversations that they had to try and convince him therefore appear to have worked.

Two days ago, on his Instagram, Neymar praised his dad.

"You represent all my friends. Having you as a friend is one of the best things I have in my life," he wrote next to an image of them both on a plane.

There was a surprise special guest at the recent Chinese Super League clash between Shanghai SIPG and Guangzhou Evergrande, when Cristiano Ronaldo attended the fixture.

Fifteen minutes before kick-off, Ronaldo appeared on the field of play alongside his compatriot Ricardo Carvalho to take in the applause of the supporters.

The city of Shanghai is currently going through its hottest summer in 145 years, something the Real Madrid ace joked about while on the field.

"Today is the hottest day because I'm here," he laughed. "It is a pleasure to be in Shanghai and meet people who love football and Cristiano."

After spending five minutes on the field taking a photo with Carvalho and Zhang Wenzhao, he retired to an executive box to take in the decisive fixture.

While at the stadium, Ronaldo also met Luiz Felipe Scolari, Guangzhou's coach, and the man who gave him his first ever Portugal cap during a 2003 friendly in Kazakhstan.

Costa 'likes' the signing of Morata by Chelsea

With each passing day it appears as though Diego Costa is closer to signing for Atletico Madrid with Alvaro Morata transfer to Chelsea one of several developments.

The Brazilian born player took advantage of Morata's presentation to put a 'like' on an Instagram picture taken by Chelsea of the former Real Madrid player.

The priority in the summer transfer market for Pep Guardiola was clear: to reinforce, and change, his defence.

In the final stretch of last season, because of the poor results, it became obvious to everyone, least of all Manchester City's coach, that something had to be done with the back line.

For that reason, Guardiola asked the board to back him and since then, several players have already arrived ... with Mendy from Monaco the next expected purchase.

With that transfer to add to the list, the English club will have spent in the region of almost 245 million euros on defenders in little more than a year.

Last season, Otamendi (45 million euros) and Stones (55m) were signed, and the two will be the central pairing for this campaign.

To them are added two of the best full-backs in Europe.

Kyle Walker was the first to arrive for a whopping 57m euros, with promising 23-year-old Mendy costing 57.5m.

Real Madrid midfielder Danilo, who leaves Real Madrid for 30m, will be a luxury substitute for a team who are happy to keep breaking records in terms of the cost of buying defenders.

It's one of the most important seasons since he arrived in Madrid at just 18 years of age, and Raphael Varane knows that 2017/18 is the last chance saloon for him.

Coming into his seventh season, so far he has alternated between stellar moments and more delicate ones that made him consider his departure from the club.

Now that's in the past, or so the player believes.

With Pepe's departure, the debate as to who should partner Sergio Ramos ended in principle, and cleared the way for the Frenchman.

In the final stretch of last season, Varane achieved his goal as the Portuguese central defender, injured for long periods, was deemed surplus to requirements by Zinedine Zidane.

A starter in the Champions League final (and also in Lisbon because of Pepe's injury), Varane has climbed the last rung but now he knows the demands will be even more intense.

Not only in the football aspect, but he must also assume the role that Pepe had in terms of experience and authority on the pitch.

The process has already begun.

Zidane made it clear he should give more to secure a continued starting spot in his XI.

And, little by little, Varane is doing just that.

The next step is to have more personality and communication on the pitch.

"Now I speak more, without renouncing my style," Varane recently said to MARCA.

"I have improved on many things.",

Considered as the brightest prospect when he broke into the first-team under Jose Mourinho, a knee injury knocked his confidence.

However, with time and work, he has returned to the top and the Frenchman is sure to stay there.

Zidane: Real Madrid are worse off without Morata because we need a striker

Ahead of Sunday's friendly against Manchester United, Zinedine Zidane made it clear that Real Madrid are short up front after Alvaro Morata left for Chelsea.

The Frenchman addressed the media after Saturday's training session and gave his opinion on a number of issues.

"At the moment, we are missing a striker," he said at his pre-match press conference.

One of the names that keeps cropping up is Monaco sensation, Kylian Mbappe, but Zidane was only focusing on the match against the Red Devils.

"We always try to improve, the player is good and interests many clubs, but now I'm thinking about tomorrow's game," he continued.

Cristiano Ronaldo has kept silent ever since the news broke in Portuguese newspaper, A Bola, that he wanted to leave Real, but his coach believes that he will stay at the Estadio Santiago Bernabeu.

"As you say there has been a lot of talk about Cristiano," he noted.

"When I talk to him he is calm and enjoying his holiday.

"I look and listen as everyone does, but what matters to me is what he wants to do with Madrid and I think it's going to stay.

"I have not denied the information of A Bola."

The signing of Dani Ceballos has been one of the soap operas of the summer but coach Zinedine Zidane never wavered when it became clear that Real Madrid could sign him.

Just 20 years of age, he was named best player of the U21 European Championship, even though Spain lost the final to Germany.

After his performances, the war between Madrid and Barcelona for his signing began.

Atletico and Juventus were also interested, but there was never any real prospect of Ceballos choosing either over the 'big two.'

In the offices of the Estadio Santiago Bernabeu came one of the most important moments of what was finally consummated as one of the signings of this summer.

Zidane, whose recent successes make him more than an authoritative voice when it comes to planning the season, was asked a direct question.

Zizou made it clear, communicating to those in charge at Madrid, that Ceballos was his choice.

He knew that the Colombian would be a problem in the dressing room if he didn't get a starting spot this season, as happened after the Club World Cup in 2016.

Peace behind the scenes is very important for Zidane on the road to his team's successes.

Hence, in addition, he didn't hesitate to make an opening for Ceballos in the squad once he knew the player wanted to sign.

His enormous influence in seeing the transfer concluded cannot be downplayed, with Ceballos' future starting now.

He comes to compete and to allow one of the geniuses of the team, Luka Modric, to get appropriate rest.