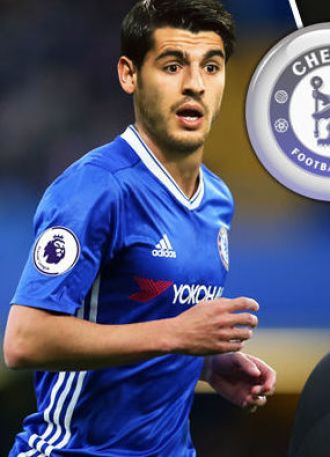 Morata to become most expensive Spanish player ever

The imminent 80 million euro move to Chelsea for Alvaro Morata will make the striker the most expensive Spanish footballer of all time.

That transfer will not only award that honour but also place him among the priciest deals ever, coming in at number eight on the top 10 list.

Ironically, eighth position currently belongs to the coach who is selling him, with Zinedine Zidane moving to Real Madrid in 2001 for 75m euros.

The most expensive deal of all time was the 105m euro switch which brought Paul Pogba to Manchester United from Juventus in the summer of 2016.

That purchase saw the Frenchman usurp Cristiano Ronaldo, who had held top spot since 2009, when he swapped Old Trafford for the Spanish capital for 96m euros, 5m euros more than Real paid to recruit Gareth Bale four years later.

It is another ex-Madrid man who sits in fourth spot in the list, thanks to Gonzalo Higuain's controversial 90m euro switch from Napoli to Juventus last summer.

Barcelona are fifth and seventh on the list with their acquisitions of Neymar and Luis Suarez from Santos and Liverpool, respectively.

Morata will also become Madrid's most expensive export ever, with this move ousting the 75m euro sale of Angel Di Maria to Manchester United in 2014.

The deal sees Morata become the most expensive Spanish player ever and Chelsea's record signing, with the former Juventus man taking both titles from Fernando Torres.

Third in the list of the priciest Spanish players is Gaizka Mendieta, who moved from Valencia to Lazio in 2001 for 48m euros.

With Chelsea reaching an agreement to secure the signing of Alvaro Morata from Real Madrid, the forward is now focused on his new adventure in London.

Morata had been training with Los Blancos at UCLA's facilities in Los Angeles, but is now ready to join up with Antonio Conte in the Premier League.

"I am very happy, god willing, tomorrow I will be at Chelsea, a club that has always admired me," the 24-year-old told MARCA as he left the camp.

His departure from the Estadio Santiago Bernabeu after returning from Juventus is all but confirmed, and so the striker is confident he won't one day be heading back to Real.

"Again, I do not think I'm going back to Madrid, I find it difficult and for now it's not something that I am considering." he stated.

"It was clear that the goal was to leave, it's been a fairly strange summer and until I pass the medical examination, I'm not going to be calm."

Travelling to England offers a fresh new challenge for the Spain International who would have found it difficult to break into Zinedine Zidane's starting XI this upcoming campaign.

"I hope that I do well at Chelsea," he added.

As for his coach, there are no hard feelings towards the Frenchman.

"I told him thank you very much for everything and good luck for this year," said Morata.

And finally, Chelsea's new hitman acknowledged the Madrid faithful who will be disappointed again by the academy graduate's departure.

"Many thanks to all the Madridistas who have supported me once more, I will always wish the best to Madrid," he said.

Neymar's careful silence over his possible move to PSG

Returning from a brief holiday in Ibiza, Neymar was very careful to avoid speaking about his future as he passed through the cameras waiting for him outside the airport.

Acting as if the mics and recorders weren't even there, he still took the time to sign some autographs for adoring fans.

Yet he didn't say a word in response to the questions asking him about a reported move to Paris Saint-Germain, only telling the journalists "see you later, good night" as he stepped into his car.

The Citizens have already been busy in the market by signing a right-back, replacing the departed Pablo Zabaleta with Kyle Walker.

However, Guardiola admitted that there is an interest in signing Real's Brazilian to add further depth to his squad.

"It is an option," he said ahead of their International Champions Cup tie against Manchester United.

"However, until a transfer is done, we will respect the other clubs and we will not say anything."

As MARCA reported, Danilo is drawing ever closer to making the move to the Etihad Stadium for a fee of between 30-35 million euros.

Guardiola, who revealed that City are keen on signing three to four more players, also insisted that striker Sergio Aguero will not depart the club.

"You know my opinion about Sergio," he added.

"He is our player and that will continue to be the case. He will not leave the club."

The drama surrounding Leonardo Bonucci's move to AC Milan is continuing in Italy, as Juventus fans have returned to club stores in their droves to give back their Bianconeri No.19 shirts.

Many are still trying to work out what went on to provoke his switch to Juve's Serie A rivals and some more details have now come out.

According to Italian newspaper Tuttosport, Bonucci's relationship with the Juventus dressing room began to deteriorate last summer when a move to Pep Guardiola's Manchester City failed to materialise.

Following this, Juventus then offered the defender an extension on his contract, to ward off any potential interest in the Italian international, but Bonucci declined their offer.

The rest is recent history as Milan offered him everything they could, including the captaincy, a salary of eight million euros plus bonuses and the chance to be the cornerstone of the new project at the club.

However, when Bonucci asked to hear Juventus' counter offer to this, one was not forthcoming from the Turin club.

Following his exit from the Serie A champions, only Gigi Buffon and Andrea Barzagli posted farewell messages on social media, a clear sign that he would not be missed by the rest of the squad.

Xavi: Barcelona have been sleeping

He may have departed Catalonia a couple of years ago, but Xavi Hernandez has closely followed the progress of his former team Barcelona and has stated that abandoning the exceptional academy work is the club's major mistake.

A product of La Masia himself, Xavi placed emphasis on the Blaugrana's football style, which he feels needs to be taught across all youth categories of a club.

"In general, Barcelona have been sleeping," he told The Tactical Room.

"They have to strengthen the youth academy and their model of play.

"Young players have to learn this form of play so that when they get into the first team they already have the concepts properly learned."

The former Spain international went on to praise Real Madrid's transfer policy and the spirit inside the dressing room under Zinedine Zidane.

"Nowadays they dominate all the aspects [of the game]: the counterattack, the positional attack, holding the ball and retreating.

"They have a very good mix [of players], who are fast and strong and believe in Zidane."

Following the general approval of Ernesto Valverde's introduction as the new coach of Los Cules by his current players, Xavi gave his own compliments to the former Athletic Club tactician.

"He's a prepared person, he has experience, he knows the club and he has lived through the style, so will do well.

"His arrival signifies a return to the orthodox style."

Valverde and his charges are currently preparing for their tour of the United States, where he'll oversee his first matches in charge.